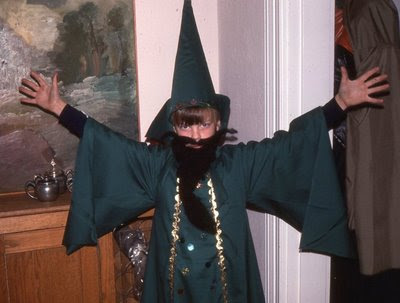 The power of Lowell compels you.

Me circa 1978-- I know by this point I'd been playing DnD. The year before or after this I went as a Shambling Mound from the AD&D Monster Manual...with a ray gun. I remember also I had a Wizard's staff to to with this-- a long dowel rod painted white with a colored tip that ended up looking more like a seeing-eye cane than anything else.

I'm been going through old pictures and slides that survived the fire, trying to scan things. I've also been trying to cement in my mind the date when Cat and I first got DnD. Actually Cat did and I just trailed along for the ride for a time. My Dad had been working up at Ann Arbor IIRC and picked up a copy of the original small three book set for my sister. I'm guessing Christmas of '76-- but I could be wrong. He also bought her a copy of the old Starship Troopers Avalon Hill boardgame. That's one of those monster wargames that I wouldn't try even now. But we got into rpgs, with things like Metamorphosis Alpha, Empire of the Petal Throne and Monsters, Monsters! coming soon after. 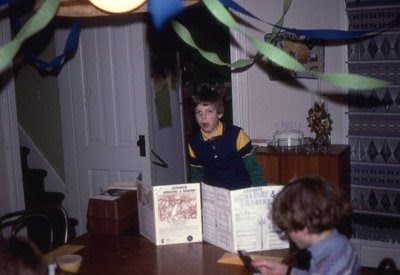 That's one from my 1981 birthday party-- you can see the classic AD&D module I'm running from there: C1--The Hidden Shrine of Tamoachan with an Erol Otus cover. Later editions used a multi-colored cover image. You can also see the homemade DM's screen, with relevant charts photocopied out and taped to a piece of cardboard. To my left you can see my figurine box which I had for many, many years. I think there's a basilisk and a Storm Giant sitting out. I liked this module, as it had removable handouts. I also put everyone's character sheets into envelopes ahead of time to let them choose. The year before this IIRC, my sister ran a game for my birthday party with amazing and elaborate maps. I was trying to capture that, though I was only 12. I think it is fair to say I've been running/playing pretty continuously for 30+ years. 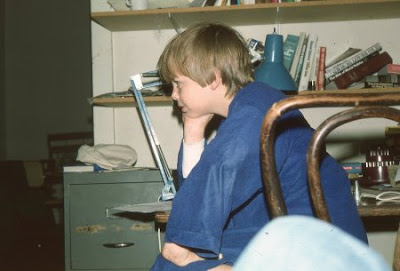 So going through the slides has been a little melancholy-- or at least emotionally tiring. I'm fighting off some GM burnout as well, but that's another story. Mostly it is just weird seeing all of this stuff-- the various toys and games I had growing up, in part, that I took for granted. Sherri's family, for example, had little in the way of that. And I know other friends I have had tight budgets growing up. It bothers me now to see all that waste a little-- or maybe it bothers me that I didn't appreciate what I had as much as I should have.

Anyway this is a picture of me sitting in my dad's study. That was, and I think Cat would agree, the most interesting room in the house. It was downstairs off the living room, without a door. From time to time my dad would hang a curtain there to separate it from the rest of the house. At some point he put up corkboard over the entire east wall to put up clippings and such. Between that and the heavy curtains, the room was always a little darker than the rest of the house. I remember he had a characteriture of himself sketch by someone always posted up. That and a newspaper clipping of Sophia Loren's face, a picture of Janis Joplin, and an odd clipped out photo from McCabe and Mrs. Miller. There'd be other papers and maps up there as well and I'd go in to look at them from time to time.

The room also had a strange narrow closet that had a locked door and a little window out. The door came from the time that had been the back of the house, before the back had been added on. We knew where the door went (to the top of the basement steps) but it always seemed a little odd. As well, because the cloest had been built under the stairs, the room narrowed down to a sharp corner which made it an attractive hiding place. It stank of moth balls, on the other hand.

My dad had a big wide desk and lots of book shelves. They'd originally been stack shelves but one year he put up hanging ones. One night while Cat and I watched TV we heard an explosion downstairs. We freaked out until my parents came home-- when we discovered that he'd missed a couple of the studs in the walls and the entire thing had come down. He had a lot of books.

The office always smelled of his pipe-- mostly the rich cherry smoke smell. That one stuck more than the others. He had a copper change bowl with sharp edges that my sister and I would thieve nickels and dimes out of. He had a Tijuana mounted frog standing at a microphone that I loved staring at and playing with. That somebody had nailed the frog's feet to the base always freaked me out. I'd imagine they'd done that while it was still alive or that maybe it has some religious meaning-- I mean Christ had feet nails, right?

In the picture you can just see the plastic pencil caddy sitting on his desk too. It was that kind of fake cherry plastic and spun around. Pens would leak down into the compartments, creating little black and blue tacky spots where stray paper clips would become permanently stuck. It attached dust, I remember that, and he only ever had a few pens in it-- the rest would end up tossed around the desk or the room. I loved that lamp too-- you could move it and make a really satisfying sound from the springs-- when I saw the first Star Trek film, I assumed that's how they'd made the V'ger noises that overwhelmed everything. I also remember his tobacco jar-- heavy and made of cut green glass. It had a wooden top with some arcane pin thing underneath it-- I'm still not sure what that was for. You'd open it up and you could really smell the tobacco.

And of course there were the books. I'd look through them all the time. He had a book on Camelot that was disappointing because it was about the JFK administration rather than King Arthur. And he had magazines and other stuff there-- including Playboys hidden away. But mostly I think we loved it because it was kind of a cool, very personal room. And usually very messy which I can use as an excuse for why I'm so messy today.

Lastly, the Wizard takes an important phone call before settling down for a drink. 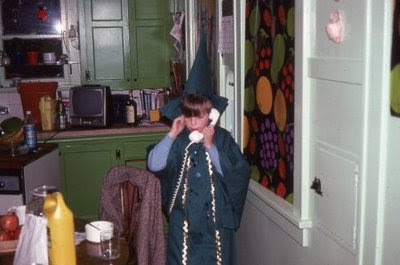 Posted by Lowell Francis at 2:31 PM

Email ThisBlogThis!Share to TwitterShare to FacebookShare to Pinterest
Labels: nostalgia