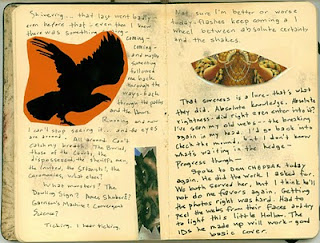 Overview
I've mentioned before that I created a significant campaign prop for our Changeling the Lost campaign, "The Wayward Notebook." After our house fire, I found a small Moleskin notebook which had been distressed by smoke and water. The pages remained relatively legible. I set that aside for later use and came back to it when I decided to run Changeling the Lost. I'd tried before to create a campaign notebook prop. In particular I'd gotten quite a ways on a travel journal for a fantasy campaign. I'd hoped to have a group use it to retrace the steps of a lost party or traveler. However I never really pulled that together and as I rolled forward with my other campaigns, it got dropped. Part of the problem was that I got overly ambitious and wanted to write an entire folio. So I killed my own enthusiasm by shooting too high.

On the other hand, the Wayward Notebook ended up slightly more modest. You can find and download the pdf of that prop here. I want to look at my objectives for the notebook and how those have played out at the table in the two+ years the game has been rolling along. We've had some changes in player line-up there but we've continued through. I should note we use the Changeling the Lost setting with the system ideas (Contracts, Seemings, Pledges, etc) hacked over into our house Action Cards system.

Campaign Prep
I started the mechanical adaptation after I'd done some campaign prep work. I have a couple of approaches to campaign building-- for example for my Wushu game, the New Orleans supers campaign, and my Exalted Dragon Blooded game I focused mostly on worldbuilding, writing up background, places and people for the players. In these cases I wrote up and sent on that material ahead of the campaign to both whet their appetite and give them a sense of the setting prior to play. In these cases I did very little pre-plotting or campaign arc building. I had the general sense of the place and the kinds of stories I wanted to tell. I had a few specific small-arc stories in some cases, but the bigger campaign story remained pretty nebulous.

On the other hand, for Changeling my prep ended up more thematic and sketchy. I directed the players to look at the general background of the setting from carious online sources and gave them some mechanical notes. I began by just brainstorming ideas- a page on places, a page on themes, a page on throwaway details. After I'd done a half dozen pages of sketches, I used my card-draw system to build a list of NPC elements. I filled in a few of those based on what I'd already developed. I then did a page or two of some campaign specific themes and stories which had occurred to me in the course of this. I was starting to get the sense of what could serve as a larger campaign arc. I'd done the same kind of prep work for the Scion campaign, reading and watching stuff on Las Vegas and building thematic notes.

In the case of the Wayward Notebook, I stopped partway through doing those sketches and decided to go ahead and put it together. I had some ideas, but I decided to wildly write things down and assemble pages. I had various stickers, torn out magazine images and other bits to use. I also had some card sets which I could cut out images from, a set of the Everway cards and the old Changeling the Dreaming cantrip cards. I snipped a bunch of things out into a pile and worked from there. From that randomness emerged the three Courts, the relation of the senior patriarch to his children, several NPCs, nine as a significant number and the images of eyes and watching. I'd mix it up between laying down pictures and writing around them and writing something and then pasting a picture in. I intended to work in some of the ideas I'd already come up with, but that ended up a small fraction. Most of the material came to me in freewriting, creating a set of ideas and things which I figured I would work in later.

So I hoped to be able to generate more ideas and things to riff off from in play. In that respect I've been moderately successful. I've brought in a few of the possible adversaries from that. I've also connected some of the plot developments to ideas I laid out there. What it really did was help me get a sense of the structure of the NPCs within the city. Since the book only has code-names for people, the players had to figure out who was who. It helped me also think about the implications of Clarity loss on Changelings and what that might look like from the outside. I think the book also helped establish tone-- both for the players and myself.

That Damnable Armitage!
Of course now I've seen The Armitage Files which takes the idea of props like this and spins those into a pretty amazing campaign. In my case the players got found the notebook on the corpse of the man who had apparently managed to rescue them from the Hedge. That incident and the notebook would provide me with the big two arcs, and pretty much the only plot plans I had at the start of the campaign: Who had murdered their rescuer, Mr. Charlotte? What was significant about their group who had been stolen from the campaign city of Wayward? The Armitage Files, on the other hand, presents an even more open approach for multiple GMs to come at the same material and end up with different campaigns. It also suggests a wholly improvisational approach. I'm pretty free-spinning, but I'm not sure I could do that. In any case I'm still pretty happy with the Notebook as a prop and I do return to it from time to time to recenter myself on the theme and look for details I haven't yet mined or connected. 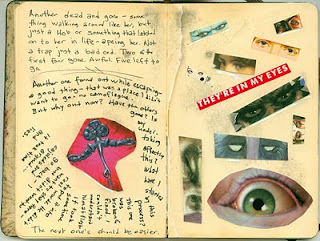 Things To Do Differently Next Time
That being said, I wish I had done things a little bit differently:

1) Multiple copies of the prop. I'd only made the single copy. I later scanned and made a pdf of it and we put it on the campaign wiki. However only having one copy at the start meant some people didn't get to look at it and some people ended up reading things off with the others listening. I should have had color or even B&W copies available for everyone to read. At the very least I should have had some kind of text transcript ready.

2) Which brings me to my second point. I sort of blew it by making it clear that this was all there was notebook-wise. It would have been better to have something more open ended. In our Fallout campaign, the radioplay prop the GM created for the first session is clearly going to be a repeated device. I played in a Hunter game in which we found a tape recording of another Hunter. There was the suggestion there that we would find other recordings later in the campaign but we never did- and most of the material on that tape worked for the first few session and then petered out. Ideally I would have had a smaller section of material, just a few pages. That would have pushed them to hunt for the other bits and been a more manageable chunk for the group to absorb. I could have had them find the pieces out of sequence or even with gaps. In a sense I threw away some really interesting storytelling opportunities. More importantly I lost some tricks which would have allowed call backs and reinforcing themes.

That would also have allowed me some space to build a first part and then tailor later parts to story events. That's a bit of a cheat in a Lost way. There's a certain honesty and challenge to providing the notebook ahead of time and then trying to nudge things to match that.

3) Related to that I should have given the notebook and copies out at the end of the first session. As it was I gave it out but had them hold off on looking at it. That avoided the problem of it distracting the players during the game, but it also made them wait and blunted the effect of the prop. That could have been planned better.

4) One of the easier mysteries/problems the notebook presents is connecting code name references and details to NPCs in the setting. I should have had more of that. Those kinds of details are fun and give insight into the setting. GMs need to balance quickly solvable problems with more difficult and longer arc ones to allow players a sense of victory. If the campaign's going to have some intractable plot details, the players need some more...tractable...ones...

Bottom Line: Creating the notebook took about three evenings worth of work. I'd say the pay off has been pretty good. I would definitely do something like that again.
Posted by Lowell Francis at 9:51 PM