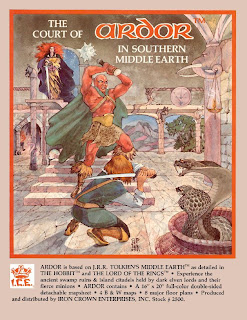 What is it?
A regional sourcebook for an area you probably never thought about in Middle Earth.

How Do I Get to the Shire?
In some respects this review serves as a sequel to my review of Umbar: Haven of the Corsairs, another pre-Middle Earth rpg product which Iron Crown Enterprises put out covering areas well off the beaten path of Tolkien's universe. The Court of Ardor (a.k.a. The Court of Ardor in Southern Middle Earth a.k.a.k.a. the insanely longer way to put it) goes all the way to the bottom edge of the map. Here's an area well outside the thinking of most classic fans. There's a certain license- perhaps a freedom to go crazy, and perhaps to have something tacitly of Middle Earth, yet perhaps out of continuity. What ICE delivers is that- an over-the-top supplement only slightly recognizable as taking place in the setting. It's worth noting that they didn't distance themselves from it in later years- long after the module had gone out of print. Characters from the Court of Ardor show up in the later compendiums like Elves with their full crazy backstory.

It Depends on What You Mean By Evil
A group of "Evil" Elves make up the Court of Ardor, controlling an area called the Mumakan which is mostly jungle and tropics (so again not what we usually see in Tolkien). I put "Evil" in quotes because the book points out that Elves can't really be evil...just misguided...and then says that some of the Elven members of the Court are in fact Evil. And partner with Demons, who are also members of the Court. Ardana controls the Court; a Noldor who served Morgoth, she came here on a particular mission ages ago. Just to be clear, that means that Ardana's a peer of Sauron. Ardana's potent and has a great host of evil or evilish allies in the Court dedicated to carrying out their plan...very slowly as it turns out since it has taken them 1700 years to get close to finishing. Mind you, they plan to tear down the Sun and Moon from the sky, so they can perhaps be forgiven for double-checking their work.

The Court rule the several "countries" of the Mumakan. They all have their own agendas, but generally serve Ardana. Perhaps the most telling detail of the Court comes from its association with the Tarot. Each member falls into one of the four suits and its associated elements (such as Orbs and Earth; Swords and Air). Each also also has a role title taken from a psuedo-High Arcana, such as The Magician, The Monk, The Persuviant, and so on. These titles aren't purely symbolic-- a set of magical cards join the Court together, used for communication and other purposes. So the Court of Ardor appear to be a strange mash-up of Zelazny and Tolkien. And there's more than just the concept of the Trumps taken from the Amber series of Zelanzy: the interactions and plots of this supplements echo those books.

Breakdown
The book itself clocks in at 52 pages of classic old-school dense two-column design. It comes with a detachable 16" x 20' map. That shows the region on one side and several of the cities on the reverse. I like the design here- hand-drawn, hand-lettered, hand-colored. The interior art is about half maps and landscape shots. Charles Peale provides some shots of members of the Court of Ardor. These have been done to look like the Trumps cards and are one of the best things about the volume.

* Table of Contents, general Middle Earth background, mechanics for converting Rolemaster, map keys: All of which takes up the first 10+ pages. Most of that material repeats across all of the Middle Earth books. Includes a nice b&w version of the regional color map with added breakdowns of the nations. That's nice as it means the color map could be used for other purposes, disconnected from the Ardor campaign.
* History: Two pages, which set up the premise of the Ardoran Court's plans and provide a timeline.
* Flora, Fauna, Climate: One+ pages, including a detailed weather chart for the different regions.
* Inhabitants: One+ pages breaking down the ethnic groups of the area- three kinds of men plus Elves and Dwarves. Short but detailed.
* Politics and People: Sixteen pages. The first page+ breaks down the "countries" of the region giving them a little over a paragraph each. The bulk of the chapter covers the members of the Court of Ardor, with 7+ pages breaking down the stats of those characters and allies. A full page covers the cards of the Court. The last six pages cover other groups in the area, including Sauron's direct agents, and provides stat blocks for those.
* Places of Ardor: Sixteen pages. Maps of the various holds and castles of the lords, plus some other key dungeons. Nice set of maps plus keyed descriptions for all of them. .
* Gamemaster Aids: Two pages suggesting how the GM might use the set up as a quest scenario. Then a one-page NPC stat summary and a one-page herb & poisons chart.
* The Court of Ardor in Other Times: Half of the last page.

As a Middle Earth Supplement
I've been thinking about the double (or triple) bind of writers trying to present material for areas outside of northwestern Middle Earth. First, there's less original source material to work from- a few hints perhaps. That means less guidance, but at the same time some more creative freedom. This leads to the second bind, in that anything still has to feel like it works within Middle Earth. It has to seem possible and means that any freedom must be tempered. But I think a third difficulty pushes against that as well: the need to make a compelling setting.

Here's the thing with a location like Ardor- how do the PCs actually get there? Will they be traveling down from Gondor? Past Umbar, past the Haradwaith, around the coast of the Seven Kingdoms and thence finally to land here? The story of the Lord of the Rings is a travel story across a land significantly small than this: from the Shire to Mordor. Players won't be moving back and forth willy-nilly without some serious hand-waving. So there has to be a pretty interesting set of situations and adversaries present here to make a GM either move his campaign to this place or else begin it there.

So Ardor does provide an interesting Sauron-level adversary, or perhaps Ringwraith might be a more apt power description. They're tied into some of the old Tolkien stuff and there's a bunch of them. Fifteen Dark Rider equivalent bad guys...Rolemaster Level 40 or so with tons of magic items, all kinds of spells, demon blood, huge towers, and...well, it becomes a little overkill. Ardor tries to offer a compelling and somewhat independent story but ends up breaking the verisimilitude through its power gaming.

As a Regional Supplement
One question I usually ask of supplements like this is how well the area could be lifted out and dropped like a jigsaw piece into another campaign world. If it can't, on the one hand, then ideas may be harder to borrow without rebuilding things or doing a great deal of work. If it can, it may indicate a generic setting lacking in interesting ideas. The problem here really is that The Court of Ardor isn't really a regional supplement- the regions and areas really don't matter. The real detail and structure lies in the Court as adversaries.

As a Campaign Seed
I do love the idea of looming and powerful bad guys known by their name, but also a title-- Linsul...the Harper! for example. The structure appeals and the authors do well in borrowing some of the concepts from Amber, though they do so more literally than necessary. They also make an odd design choice related to this and the Court and their Arcana. The book sets up 16 characters for the 21 trumps, leaving five as "inactive." It's unclear whether these have been left blank for the GM to add in additional NPCs or perhaps space for the PCs to take over a role. The campaign against the Court could be done-- the material presents the bare bones for that complete with an NPC entry point for that who unfortunately serves as a deus ex machina for overthrowing everything- potentially undercutting the players' role. Serious changes would be needed to make that work.

How I Used This
I usually approach modules and supplements like these with an eye to adapting them. The maps, of course, proved the most useful-- interesting layouts for a couple of dungeon crawls. However the rest seemed more problematic-- but at the same time a compelling idea and set of potential adversaries for players. The difficulty lay in their power and coming up with some framework for them. Strangely enough, the solution for me came from another crazy ICE product for Rolemaster, the Elemental Companion. This would be another over-the-top power gaming supplement for that system, providing insanely potent magics. That wasn't as interesting to me as the ideas about complex elemental theories, including bizarre kinds of elements such as Nether, Vacid, Time, and Heat. I'm a big fan of typologies, so liked the strange and convoluted hoops the authors went through to justify their cool new blast powers.

In the end I combined the two, creating a set of elemental lords who sought to move from a world they'd undone with their elemental poisoning (a concept borrowed from the Elemental Companion and Red Steel). I took the characters of the Court as presented and associated them with the different elements. For several campaigns they served as either the big bads or as secondary bad guys. In retrospect it was a kludge and a stretch, and I probably could have built a more logical and complete system by starting with new premises. However I enjoy the challenge of finding the interesting ideas in supplements like these and crowbarring them out into something else.

Overall
The Court of Ardor is the kind of book which would be done in at least 192 pages today. It has a ton of cool ideas given just a brief mention and discussion. That's not to say that all of those ideas hold together. Ardor's a good book to look at for a snapshot of a kind of rpg design. Hugely powerful NPCs, big dungeons and a thinly described backdrop-- a whole campaign setting done in 52 pages, complete with maps. For those looking for Middle Earth material per se, I think it doesn't work.

Portability
As you can see I managed to find some things to steal-- my favorite thing to do with game material. I ruthlessly thieve cool stuff and this book has that. It also has some great crazy location maps worth lifting as well.
Posted by Lowell Francis at 8:50 AM