A Tale of Two Kickstarters

MULTIPLEX
For  Christmas this year, Gene Ha generously commissioned an image from one of my favorite webcomic artists, Gordon McAlpin. He writes the amazingly funny and creative Multiplex. I will admit to a certain bias given the several years I spent working and even serving as assistant manager at a local movie theater. That theater, the Forum Cinema "caught fire" several years after I left. Today, when I go into Showplace 14 and see they're now serving chicken nuggets and pizza, I can only cringe with the thought of what cleaning that up involves. 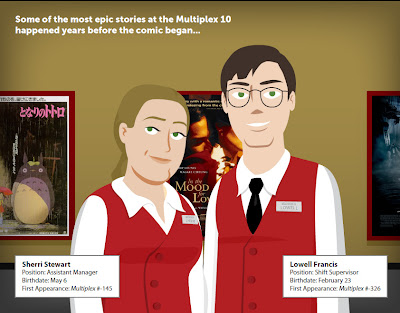 More importantly, Gordon has begun a Kickstarter project for the second collected volume of his webcomic. I have the first and I've read it cover to cover a half-dozen times. The Kickstarter page for the project is here, and I recommend you check it out.


SOLUTION SQUAD
My friend Jim McClain is working on a math-based comic called Solution Squad. He has some pretty amazing concepts he's put together for this: combining years of experience as a math instructor with his passionate love for comic books. Jim ran some of my favorite sessions of Champions in the past. He crafted and ran an extended arc which essentially brought the elements of Norse Ragnarok to the game world, and presented an actual "Twilight of the Gods" changing the setting significantly. It remains one of the best sets of sessions I've ever played in. His diceless take on Star Trek remains another campaign that actually showed me how games could transcend limits and really emulate an experience.

Posted by Lowell Francis at 4:00 PM