So today is Sherri’s birthday, my wife. She’s pretty awesome and she keeps pushing me to run more games. She also takes a supporting role when she plays- doing up handouts, figuring out how the rules work, and building wikis. She went away on a “girls weekend” last week. I went out with a couple of buddies in the evening. We watched a movie and after I left I turned around to chat with her about my day. She wasn’t there and it was super disappointing.

So I enjoy her company consistently. She’s smart about games, she’s smart about life, and she’s close to same mix of outraged and relaxed (leaning more to the latter). We disagree about games sometimes, but more often than not, that’s a productive disagreement. She’s pushed me to approach new styles of play and diversify the elements of my campaigns. She spent last night after the Legend of the Five Rings session playing Sid Meier’s Alpha Centauri until 2AM.

I bought her new walking shoes, bags of whole bean coffee, and some Joulies for the coffee pot she takes to work. Our insanely generous friends Gene Ha and Lisa Sharkey sent her an overwhelming set of gifts for her birthday: a Chococat from Kidrobot; a signed copy of the new Lucy Knisley book; a page print; and Gene’s drawing of Sherri’s character from the Changeling Lost Vegas campaign, Morosa Scorned. She's a Witchtooth/Clotheshorse Ogre. 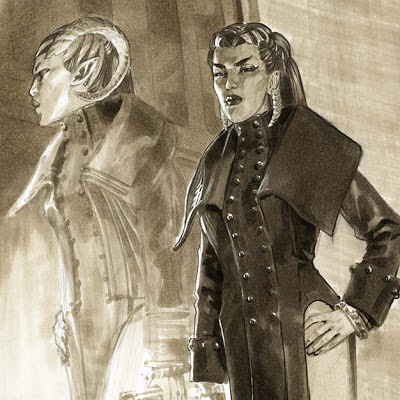 Note: The History of Victoriana and Steampunk RPGs will return next Monday with Part Four.
Posted by Lowell Francis at 11:49 AM