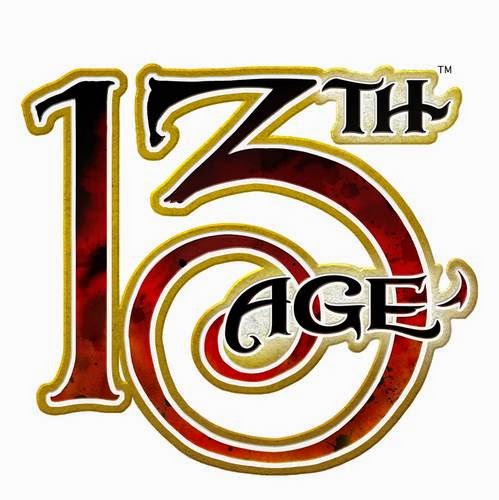 This year I played six sessions and ran eight of 13th Age. That's not that much but it's become my go-to system for throwback fantasy. I played years of Basic D&D, AD&D, Rolemaster, Stormbringer, and even a little 3.5. But in the last decade or so when we've done fantasy, it's been more narrative and less classic. We'd used GURPS, Storyteller, True20, Fate, and various homebrews. 13th Age hits my perfect middle ground for  handling dungeon & hex crawls. It offers fun class choices for players, challenging monsters, cool world-connecting elements, and handwaves mechanics I'm not interested in.

For this list I'm pulling together what's been published for 13th Age up to this point. I'm probably missing a few things. Where I've read through a product, I offer my impressions. Hopefully players considering 13th Age can look at this and see what's essential and what might be interesting for their play style.

The Basics
13th Age is a d20-esque game. It echoes various versions of D&D but streamlines them to focus on different elements. To me it feels like GMs got together and looked closely at how they actually run at the table. Then they built a system supporting that. 13th Age has nine classes (Barbarian, Bard, Cleric, Fighter, Paladin, Ranger, Rogue, Sorcerer, and Wizard. Each offers a radically different approach to play and differing complexity. Characters are built on the classic six stat system and the game supports play up to level ten. Players familiar with other d20 or D&D games will easily recognize the mechanics.

The SRD for the system is available online. That's a good place to check first to see if the game fits. Among my players a couple haven't bought the core book, but they've been able to use the SRD well enough to keep up with play. The generic system for 13th Age is called the Archmage Engine.

13th Age has several striking rules elements I love. Some are unique and some reflect innovations in other systems. This is my personal list of the best.
This simplification may not work for everyone, but I enjoy it. For actual play, you can check out my videos from our ongoing campaign. 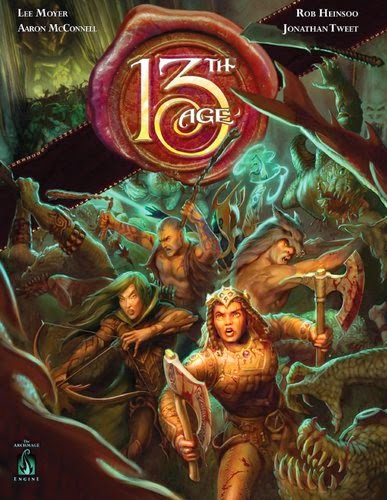 13th Age Core Rules
The core book for 13th Age is complete and covers all elements of the system: character creation, combat, adventuring, monsters, magic items, and a sample adventure. You could easily run a strong and satisfying campaign just from this material. For example, the bestiary offers many of the classics and suggestions on how to retool them. The GM advice is particularly good. Often you'll see a conversation between the designers about how they handle elements differently in their campaigns.

I've talked about 13th Age as a system, but it also includes a rich and distinct setting, The Dragon Empire. It runs through the book, used for examples and explanations. The book begins with this material, in particular the Icons of the setting. GMs looking to assess the mechanics may find themselves jumping past. But that misses some of the best stuff here. The setting's vivid and does an excellent job of making the game concrete. It shows how assumptions about the world can affect mechanics and character play. The sample adventure, for example, demonstrates how Iconic relationships can be used to change environmental and plot details. At the same time, 13th Age's setting doesn't feel intrusive. The rich material didn't get in the way when I went to use it for a different world.

13th Age has a couple of points GMs should be aware of. The classes are distinct enough you may not have mastery over what everyone can do right away. That also means players may have a hard time transitioning from one class to another. It’s also easy to see Recoveries as an unimportant element unless you're pressing hard on the party. Finally new players will continually get lost at the distinction between Talents and Feats. 13th Age handles feats differently than many other games. Both times we've done character creation sessions, players miss what they can take and what they can buy up. It took a couple of sessions to get that worked out in both cases.
13th Age Core on RPGNow 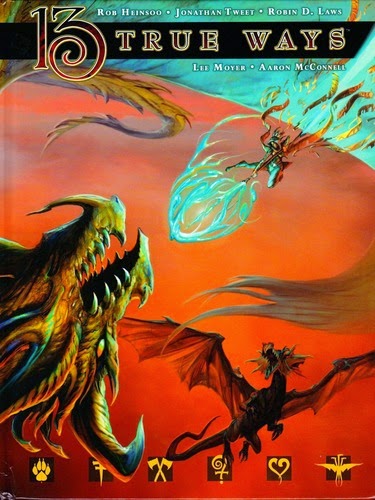 13 True Ways
This is the first major rules sourcebook and expansion for 13th Age. It includes six new classes: Chaos Mage, Commander, Druid, Monk, Necromancer, and Occultist. Again they feel novel and distinct from one another. All lean towards the higher end of difficulty. The Druid, in particular, has diverse menu of options to really tune the character towards different conceptions of the class. This book presents rules for handle multiclassing, a perennial concern in these kinds of games. All this takes up the first 110+ pages of the 256 page book.

Most of the other sections are smaller. Forty pages covers five different cities in the Dragon Empire setting. I like the presentation here- with discussion of twists on the city and lists of rumors. GMs will be able to lift elements, but it especially supports GMs running this setting. An equal amount of space presents new monsters, including lots of devils, dragons, and elementals. It also has some simple advice on changing existing monsters to match party levels. Complimentary to that is a short section on "Deviltry." It considers how corruption and the infernal might fit into a campaign. To illustrate this it presents different origins for devils tied to each of the Icons. This can be useful for GMs of the setting and as a model for other campaigns. The GM section at the end of the book presents a grab bag of ideas. I dig the new magic items in particular.

This supplement is solid. I'd say buy it after you've had a chance to test drive the system and get a feel for the basic game. This doesn't change it, but the new character options could be overwhelming. It’s recommended, and if you're running in the Dragon Empire setting, it is highly recommended.
13 True Ways on RPGNow 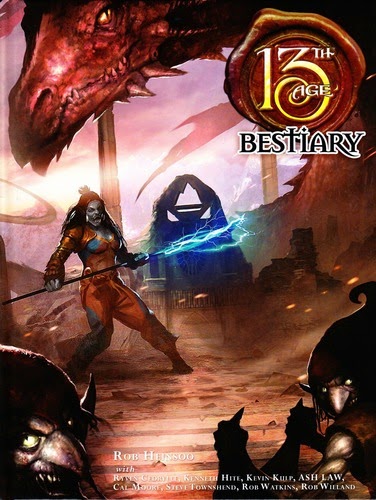 13th Age Bestiary
Everyone loves monster manuals and this is a good one. There's a great range of different monsters with evocative artwork. Basilisks to Gelahedrons to Remorhaz to Zorigami. Each entry has the basic stats as well as suggestions on how to do nastier versions. Most include advice on building battles, connections to the Dragon Empire Icons, and adventure hooks. Many have sidebars offering additional thoughts and ideas on how to use these creatures. Outside of the monster listings it also includes discussion of how to reskin or tweak existing monsters, notes on how to build monsters from scratch, and a complete index by level and role for all the monsters from the bestiary and the core book. Throughout the book there are nice GM ideas, like odd monster lists including “Monsters That Might Take You For Ransom Rather Than Just Kill You."

I really love the 13th Age Bestiary. The core book has a ton of different monsters and you could easily run or build from those. But this book offers its money's worth for GMs. I'd suggest this as the second book to purchase for anyone wanting to run 13th Age.
13th Age Bestiary on RPGNow 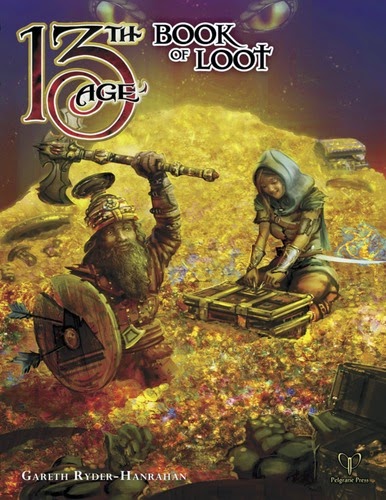 The Book of Loot
I love magic items even more than monsters. Creatures & Treasures remains one of my go to sourcebooks when I run fantasy. 13th Age puts an emphasis on magic items, balanced by two concepts. First, that players can only use a limited number of items. Second, items exert an influence through personality quirks afflicting their bearers. The Book of Loot is a compendium of magic items. Each chapter focuses on one of the Icons, offering associated goodies. So for the Diabolist we have The Ring of Honeyed Words and Priestess we have the Circlet of Revelation. At a quick count each offers 20+ items, including some with extensive discussion. There's also some GM Notes and three adventure hooks for each.

The organization by Icons works well for Dragon Empire campaigns. If you're not using those, you may find it a little harder to work through. I'm more accustomed to arrangement by item type, but I see why they took this route. The book includes a quick reference table at the back broken down that way. It’s also worth noting that all the items have quirks associated with them. In other books the authors only infrequently detail those. GMs who have had a hard time coming up with quirks will appreciate the examples here.

This is a solid resource for 13th Age GMs. It isn't essential, but it is highly useful. The items are clever and this is worth buying for any FRPG.
The Book of Loot on RPGNow 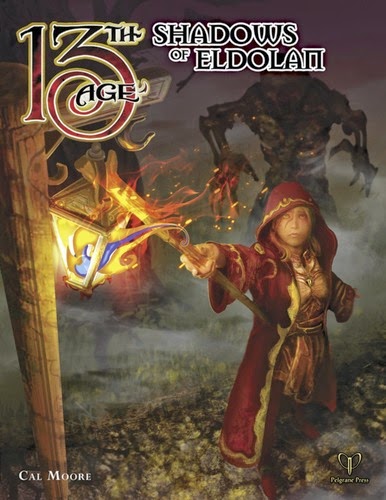 Adventures
So far Pelgrane has released two adventures for 13th Age and has another forthcoming: 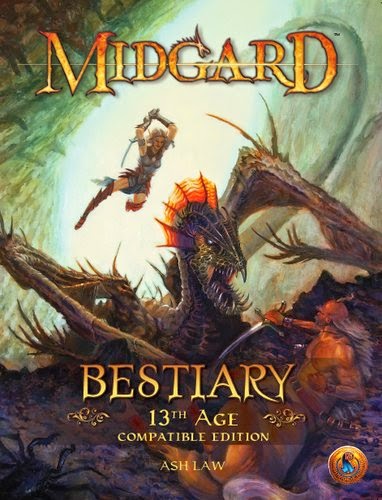 Midgard Bestiary: This is a great 108-page book. For one thing it really sells the unique setting. The Psychic Derro Fetus, Nienheim Gnomes, and Merrows all caught my eye for use at the table. Each entry includes the basics, magic items found with the monster, and often adventure hooks and other interesting GM discussion. It adds the unique player races of Midgard, though GMs will want to look carefully at these before bringing them to another campaign. More importantly, Wade Rockett writes up the 13 Icons for the Midgard setting. This does several things. It makes it really easy to shift over to Midgard and keep those rules. It also presents a great snapshot of the setting, giving novices like me a better sense of what's going on. Finally it serves as a great model for GMs thinking about creating Icons for their own world. It’s a great book and I recommend it highly for 13th Age GMs.

Deep Magic: I have not yet picked this up. It's a 144-page sourcebook focusing exclusive on Wizard Magic. That includes new talents, schools of magic, and options to make the 13th Age magic system reflect that of Midgard. It looks pretty cool.

The Wreck of Volund's Glory: An adventure for 2nd level characters design to be run in a single evening.

Jon Brazer Enterprises
Jon Brazer Enterprises has released three 13th Age products. The most important of these is Deadly Delves: Reign of Ruin, released in parallel with a Pathfinder version. This is a decent 34-page adventure for 4th level characters with the intent of moving them up to 5th. There's some nod to the 13th Age setting in the form of Icon connections, but for the most part it offers a stand-alone adventure. GMs will find a few new monsters, an introductory travelling section, and a multi-level dungeon. It has a couple of sharp ideas on how to run a dragon against the PCs. Brazer has also released two short supplements: Book of Beasts: Monsters of the Great Druid featuring 12 new monsters and Age of Icons: 100 Lich Queen Agents which is actually a list 100 names plus five NPC write-ups. 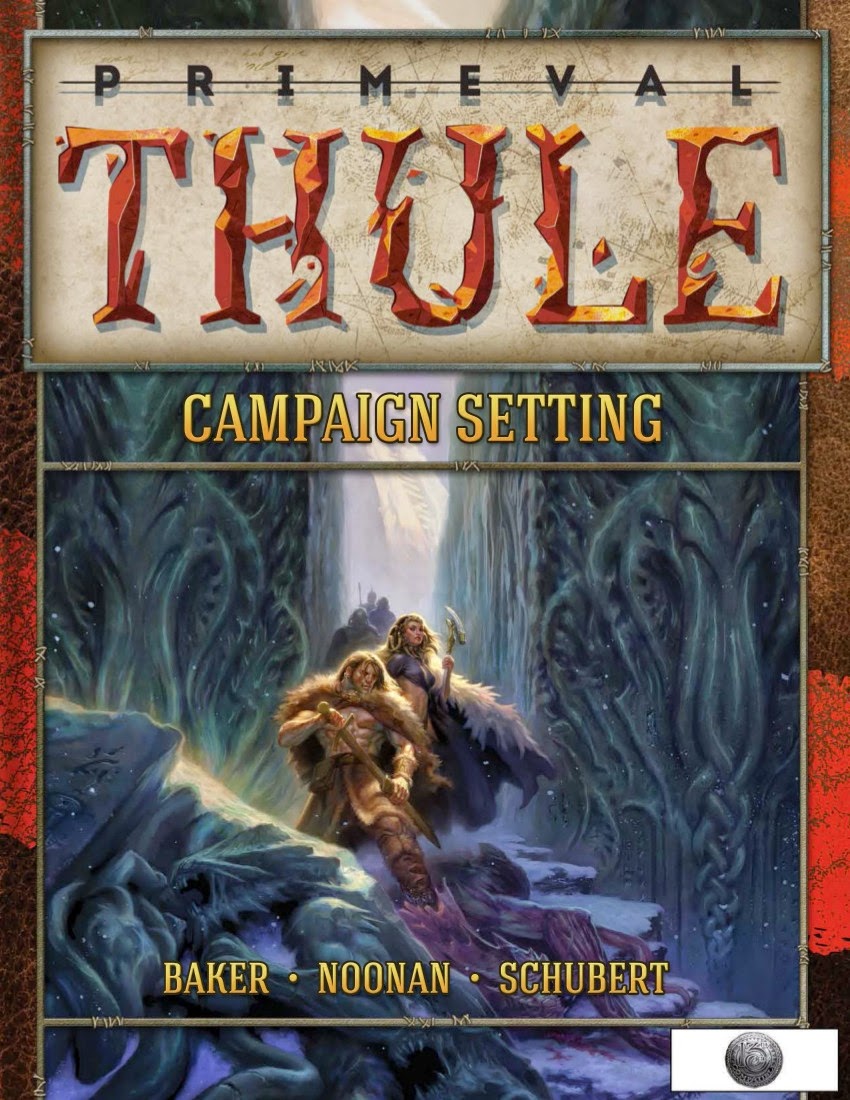 Posted by Lowell Francis at 3:21 PM