Using Confrontation for Legend of the Five Rings 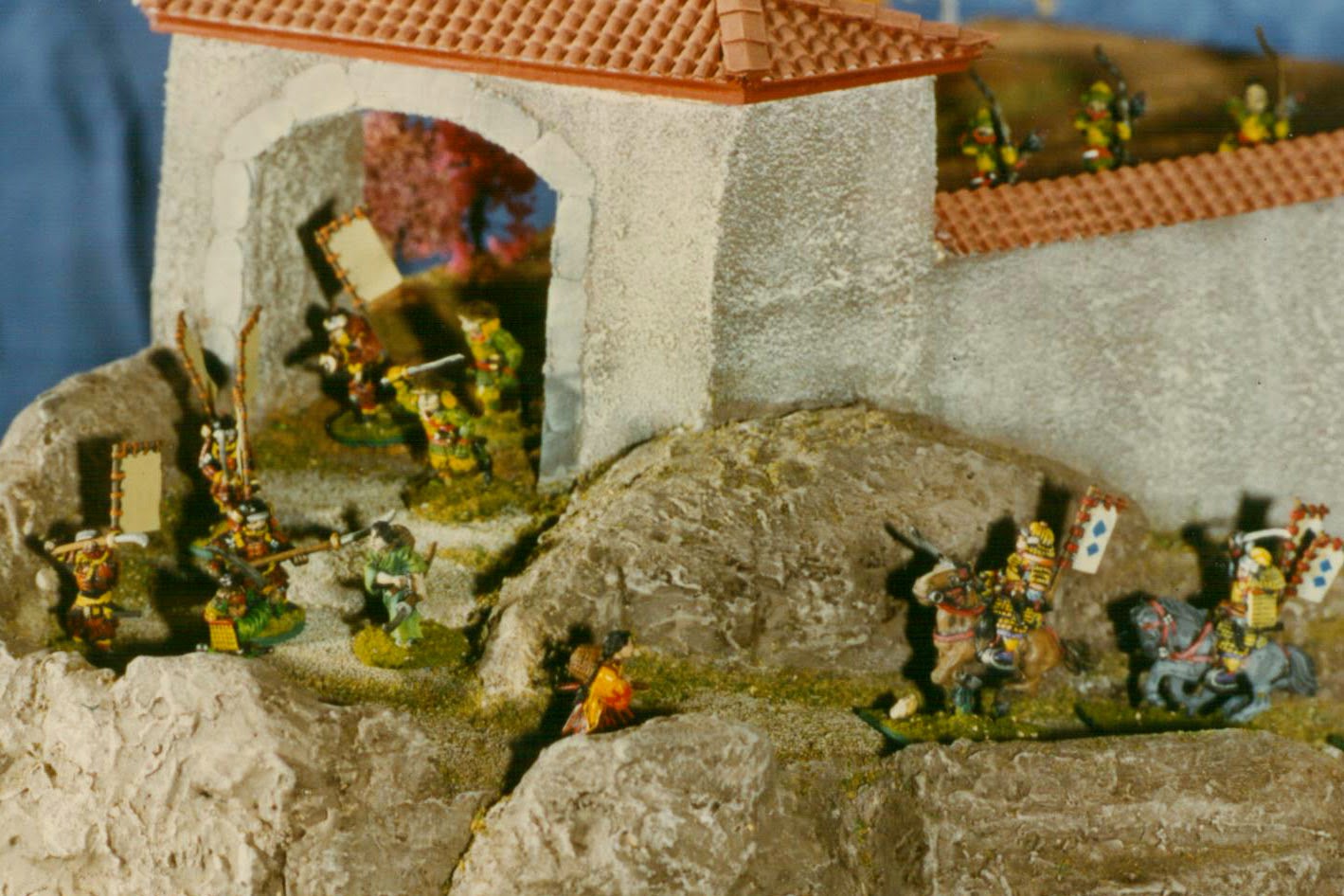 PROLOGUE
While I’m mostly rpg inclined, I like other kinds of games. In particular I used to be fairly into Miniatures Games. I did Warhammer 40K from Rogue Trader on, original Chainmail, Napoleonics, Franco-Prussian War, ACW, American Revolution, Necromunda, Man O’ War, Piquet, Heavy Gear, and others. I should note this: much like board and CCG games, I am terrible at miniatures game. I enjoy playing them, but my brain doesn’t wrapped around it. So while enjoyable, they form a minor part of my gaming.

Despite that I wrote and self-published a set of samurai miniatures rules that I demo’d at various conventions, Ge Koku Jo. (I still have many copies if anyone wants one). GKJ offered a simple and fast set of ahistorical skirmish rules, based on Brother Against Brother (which I also worked on). Several handfuls of figures, running around in a disorderly way, and slowly getting whittled down.

I’ve always prefer mini games without set formations- loose groupings. WHFB and much of the historical stuff could be fun, but eventually wore me out. When the French figure line Confrontation first appeared at my FLGS, we bought it because the awesome figures. Great models, dynamic poses, and unique designs. Eventually we acquired enough that I started wondering how to play. Rackham's first English-language rules were bad. They desperately needed an editor who understood rules. Eventually we got Confrontation 3.0, a solid set of rules that still needed an editor with a better grasp of English and technical writing. Then Rackham switched over to plastics, alienated local stores, gutted the rules, and went bankrupt.

WHAT IS THIS?
So Confrontation 3.5’s my favorite set of mini rules. And I also love samurai gaming. And I also love the Legend of the Five Rings setting. I’m running a campaign of that using Action Cards right now. I’ve been thinking that eventually I might want to do a big set piece battle, which made me pull this material out. This is a set of scattered notes on how you might adapt Confrontation to do a L5R skirmish game. It’s more involved than Ge Koku Jo or Osprey’s Ronin. It perhaps tries too hard to borrow from Clan War's ideas, especially with tactical cards. What’s here is incomplete, but could be played as a generic samurai version. I wrote this several years ago, but still haven’t played it. I plan to fix that this year. Everything here is rough, rough, rough- but feedback's welcomed. I'm posting this for the incredibly tiny population for whom this might be interesting and/or useful. 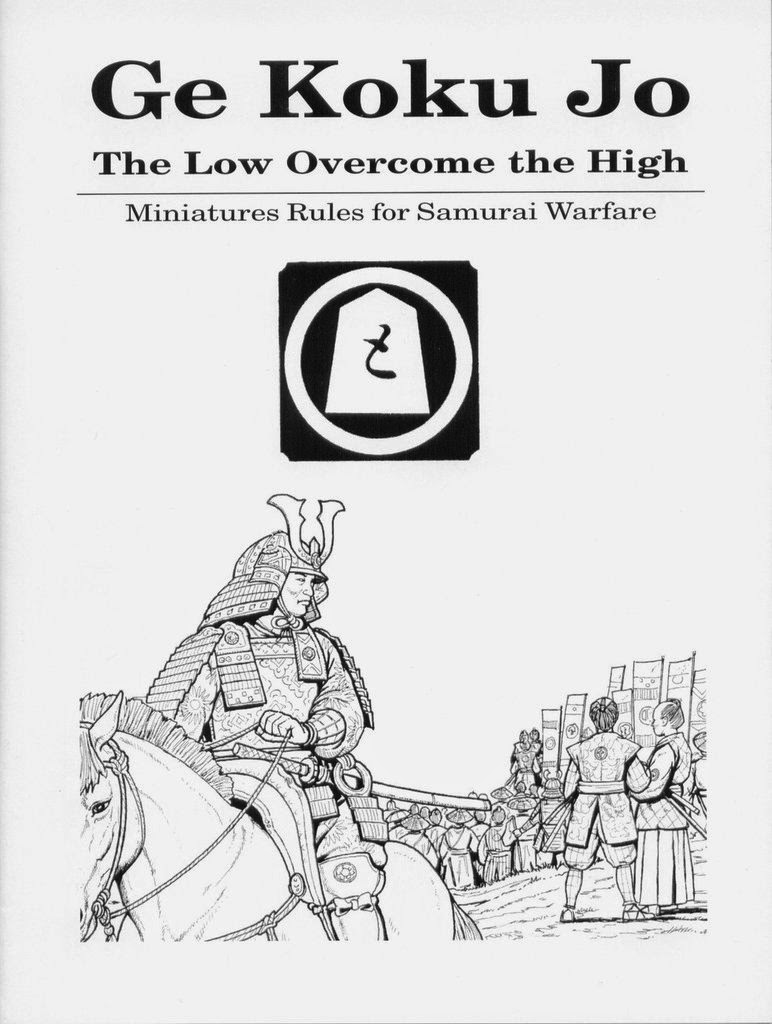 UNIT CLASSIFICATIONS
Confrontation has a system for classifying units, but that doesn't come much into play-- there's no restrictions with the exception of # of models and characters per 100. For the purposes of this system we'll break things down into two sets of indicators: type and class. Type has three categories: regular troops, elite models, and named characters. In reverse order, named characters are obvious- they can be challenged and issue challenges. Elite models include Yojimbo, Ninja, Monk, Shugenja, and Gunso; they are also one model per card. These models may be challenged, but may not issue challenges. Everything else is considered regular and may not be challenged or issue challenges. They are up to three figures per card. Unless otherwise noted, Clan Specialty units are regular.

The class breakdown only affects Named Characters and Elites: Bushi or Non-Bushi. This is for determining the effects of declining a challenge. Unless otherwise noted or affected by a tactical card, a challenge by a member of one class may be declined by a member of the other class without dishonor. The only requirement in this case is that the declining unit fall back.

CLANS
For this we're only considering the seven major clans (leaving aside Unaligned, Toturi's Army, Yoritomo's Alliance, and the Naga for the moment). Shadowlands will be dealt with separately. To keep things simple to start, each clan has five named characters as well as five specialty unit types. This is still a skirmish game, so players can pick and choose what they want, with the usual restrictions on number of models and characters per 100 points. 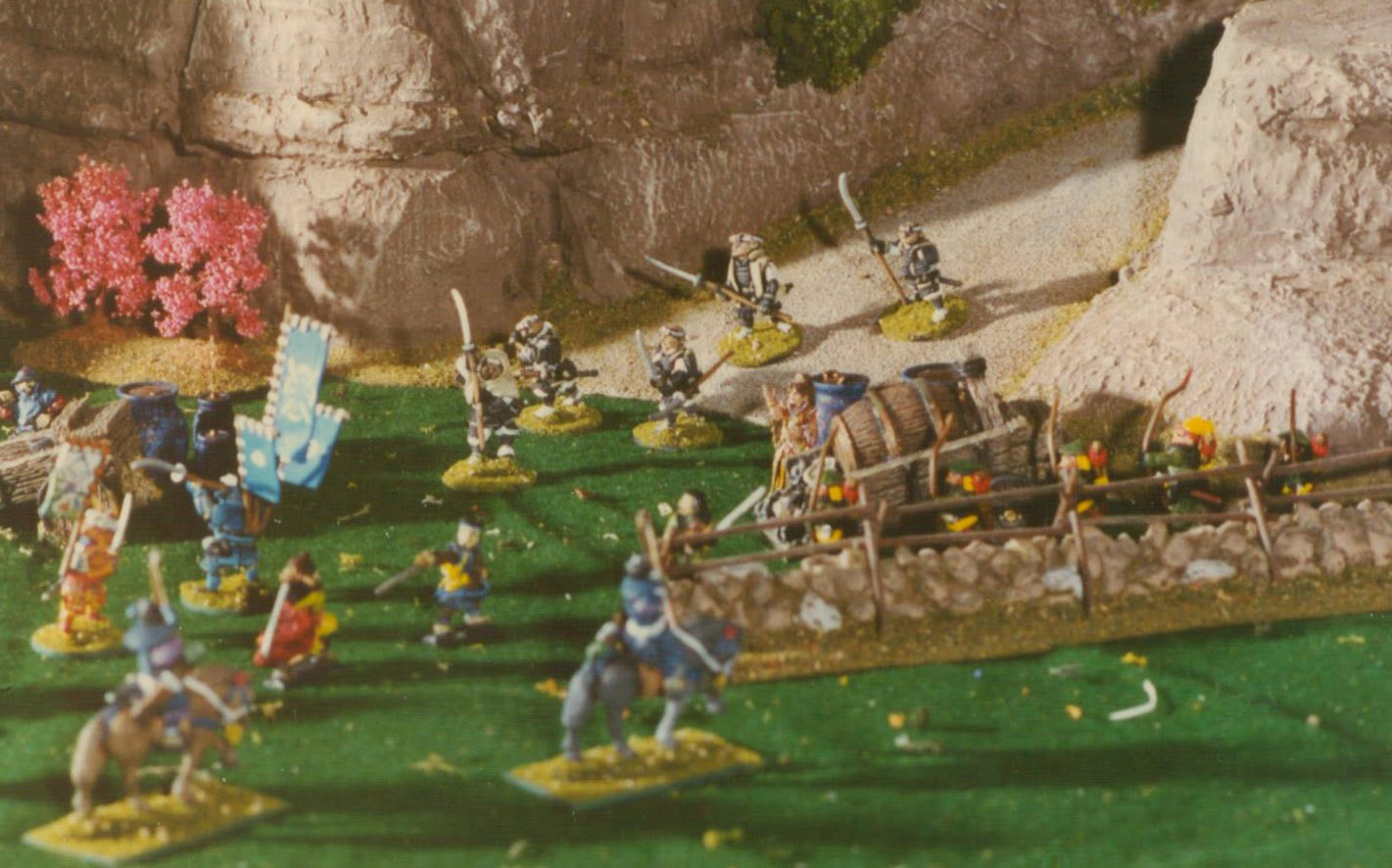 DUELING
Character models (including Gunso and Shugenja) may challenge another character to a duel. If challenging within the same class-- i.e. Samurai types vs. Samurai or Shugenja vs. Shugenja-- then the targeted model may decline, but will be dishonored. Dishonored models suffer a minus -1 penalty, as if having taken a Light Wound. They must also immediately fall back a full move away from the personality who issued the challenge. If the model who declined has the Leadership ability, they may no longer use it for the rest of the battle. If a model is challenged outside of their class-- i.e. Samurai vs. Shugenja or Monk, etc, then the target may decline without being dishonored, but must fall back their standard move away from the challenger.

Dueling is a contest of INI between two models (Shugenja's operate a little differently and I'll come to that). The challenged model has the first choice of Focus or Strike. If the challenged model focuses, then he may add an additional die to his roll in the contest. The challenger then has the option to focus or strike. This continues, until either one model chooses to strike or each model has focused the maximum of three times. Both duelists roll one die + INI + one additional die for each Focus action they took. Any dice which come up ones are ignored and not added in. The results are compared and the winner is the duelist with the highest result. The loser takes a wound with ST equal to twice the difference of the rolls. The minimum wound which may be dealt is a Light Wound. In the case of a tie, both combatants take a wound equal to the average ST of the two combatants. The loser of a duel must fall back a distance equal to their move and make a DIS or be routed. If the loser had not yet activated this turn, they may attempt to rally on their action, but that is the only action they may take. In the case of a tie, both parties are considered losers.

Shugenja may duel using their INI or their POW. If a shugenja has unspent mana, he may spend mana to raise his POW for purposes of a duel, at a rate of one for +1. At most he can double his POW. In the case of a tie use the Shugenja's temp POW to determine damage.

If a personality wins a duel against a target of either greater point cost or no more than 10% lower, he gains a +1 to his next Attack and Defense roll.

Certain traits assist in a duel. If a character has the Fencer or Fine Blade ability he may add plus one to the final results of a duel. The new ability Duelist/X allows a play to add a bonus to his dueling test equal to X. Additional, a duelist may reroll one of his dice in a duel.

TACTICAL CARDS
Certain personalities have the ability Tactician/X. This allows that model to purchase special tactical advantages before the game begins. The most tactical cards a Tactician may have is equal to X. There are three types of tactical cards: Action, Reaction, and Terrain. Terrain cards are played at the start of the game-- only one terrain may be in effect on a battlefield. Terrain cards represent a leader's ability to control where and when a battle is being fought. If more than one commander attempts to play a terrain card, the winner of a DIS (plus their Tactician value) contest may play theirs and the opponent's is discarded.

Action cards are played when a leader activates and affect listed unit or units for that turn only. Some affects require a DIS+Tactician test to activate. If this roll is failed, discard the card without effect. A leader may not be engaged when activating a tactical card and may not charge on the same round. Reaction cards interrupt and affect specific events. They may not be used if the leader is engaged in combat. All reaction cards require a DIS+Tactician test to activate.


Tactical Cards for Clans
Crab:
Increasing bonus for a charge (as Amok Slayers)
Negate Item for a turn
Anti-Shadowlands
Banzai Charge if multiple foes engage and kill a foe, all may make pursuit moves

Lion:
Increasing Force required for a charge penalty
No Mercy- model which fails fear test when beihng charged must remain in place
Martyr-- spot a dead model to give other models within range a bonus
Price of caution target a model and reduce Courage for a turn

Phoenix:
Enhance spell as if X amount of additional mana was expended
Reduce Spell Difficulty
Beyond Your mastery-- after shugenja casts a spell, must make a test or not be able to cast same spell for rest of game
Increase Spell Frequency

OK, forty listed above-- assuming four per clan, plus twelve generic. Since ability grant is open ended, can cut a few of these out of here.

ITEMS
Should again be a pool of general items for them to pick from. Also each clan would have like three items specific to them. In the case of the Dragon, these would include tattoos. Need to balance out having more items with a reduction elsewhere-- perhaps in the tactical cards or access to generic items. 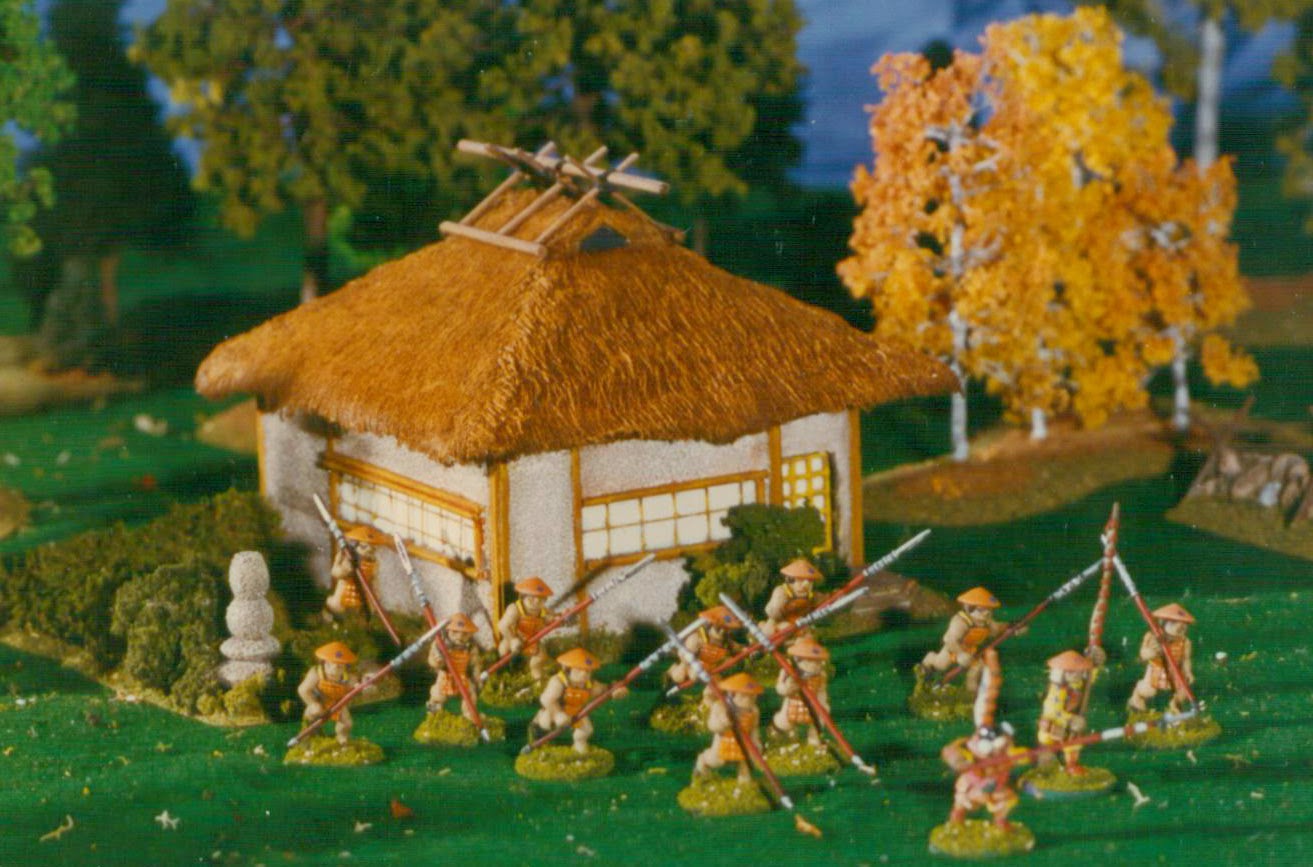 GENERAL BRAINSTORMING NOTES
Basic set of common units:
Gunso (basic guy, leadership). Perhaps for each clan, they would have a special ability related to their clan. Crane might have Duelist, Crab might have hard boiled, Lion might have War Fury, Phoenix might have an Aim bonus; Scorpion might have Ninja, Unicorn would be on Horseback and Dragon would have Consciousness. For the moment we’ll leave out: Shadowlands, Toturi’s Army, Naga, and

Each has a basic profile. That profile assumes a sword. Modifers based on the other types of weapons: Yari or Naginata (IN+, ST-, +vCav or IN-, ST+). No-Dachi can be bought as an item for a character. Samurai can be bowmen if the player pays a # of extra points?

Each clan then has a half-dozen characters, at least two shugenja, one misc, and three warriors (in rising levels of cost).

Each should also have four special units.

Tactician cards are prepurchased effects. There should be like 8-12 basic ones, and maybe 4-6 per clan.