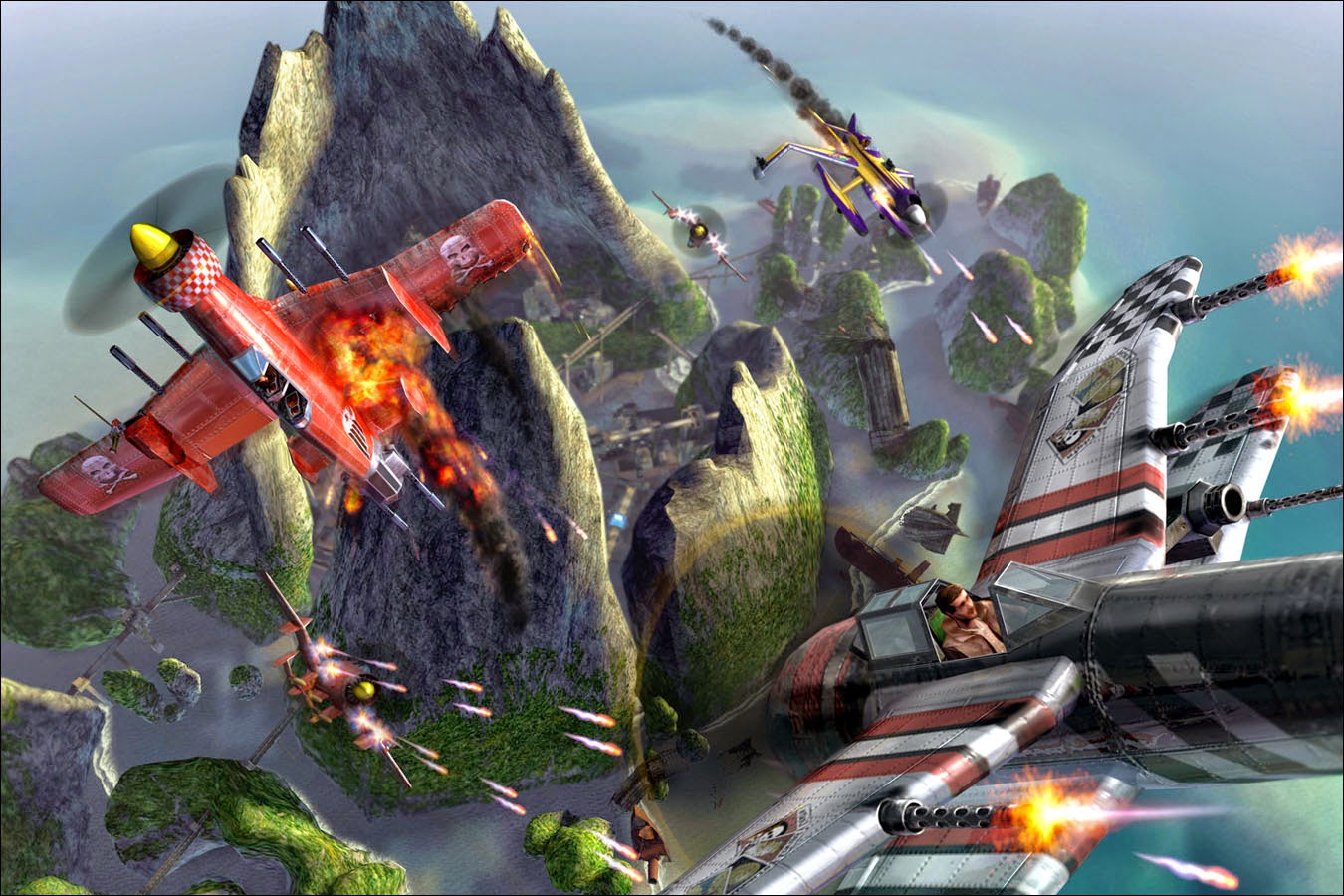 TAKE TO THE SKIES
I’ve posted before on my current Ocean City Interface campaign (OCI). That game contains several settings, called portals. Players play out stories in those portals (usually around 5-6 sessions). In between they return to the “meta-setting” of a near future world and try to puzzle out the mysteries and connections. Each world has its own logic and narrative, but these connect to larger stories. Characters and identities bleed between them.

So far we’ve played out three portals, with the players a fantasy mercenaries, then future ninja rebels, and finally imperial agents reclaiming territory. Each has had slightly different tweaks to the base Action Cards system (which itself has been tweaked with elements from Fate). So we’ve had classes & magic, strange shinobi-tech powers, and unique masks granting other-worldly powers. The players picked these portals at the beginning of the campaign. We have two left before we begin the rotation back at the start: “Assassins of the Golden Age” (my Assassin’s Creed/Mage: Sorcerer’s Crusade mash-up) and “Sky Racers Unlimited”.

That last one’s going to require airplane and dogfighting mechanics. And for several reasons, it’s where I’m going to go a little crunchier than I might otherwise. Originally I’d planned to simply do it all abstract, with zones and such, borrowing heavily from Clark Valentine’s excellent Kriegszeppelin Valkyrie in Fate Worlds V.1. But here’s the thing. I have a bunch of Crimson Skies miniature- metal and plastic- that a friend handed off to me. And I’ve been playing X-Wing, which has an awesome and easy movement system. Could I put that together?

Could I? Of course I could. Should I is another question. We’ll see. Right now I’ve probably got 10 weeks before I have to bring anything to the table. So I’m planning out and building the crunchier versions…which I’ll then start to tear down and thin out.

OBJECTIFICATION
All of this starts with miniatures and using measured movement and range. I have extra Attack Wing bases I’m going to mount the Crimson Skies planes on. The bases create uniformity, allow easy use of the maneuver templates from AW/X-Wing, and get rid of the distraction of the Clix bases. At the same time, I have sets in several different colors, so I can mix or match things up. Action Cards itself is a moderately light system using individual PC card decks for randomization and mark-up. It borrows Fate's aspects and general approach to actions, but has some Frankenstein bits in the most current version (like dice for damage).

Players will have a set of possible move for their aircraft (more on that later). Rather than dials, I’m going to use cards in sleeves or laminated sheets so that players can simply circle their moves. That will make things slightly faster and they don’t need to hide their moves from one under. On the GM side, I’ll probably have a single sheet where I can mark in or circle the moves of all the enemies.

This brings us to the question of initiative. The “Wing” games use an Up/Down system for turn order, splitting turns into Movement and Shooting. This means models move in order from worst pilot to best, and then shoot in order from best pilot to worst. If I want to do that, then I effectively double the turn length. I also need to have a fixed measure of pilot skill. As well I probably have to ditch the Atomic Robo “Pick Next” system which has served us well. Doing the Up/Down with “Pick Next” is a possibility, but would still double turn length. I’d also have to decide if the picks on the first half of the turn reverse for the second (requiring bookkeeping) or if they pick anew.

On the other hand, I have to consider if taking an action- movement and standard action changes the balance. It probably does, but given that this isn’t intended to be a balanced sim game, that’s probably a non-issue.

We usually play with a mix of minis, terrain, zones, and scene aspects. That’s a halfway compromise for players who really like the tangible side of combats. Weapons will have firing arcs. I’ll probably use the “Wing” three area range template. I’m also considering some kind of three level elevation thing. I don’t know. If I do that, it could simply add a modifier to attacks in addition to the range. I’m not going to worry about other complexities from plane games like profile, facing location damage, etc. Need to figure out terrain and collision rules (I like the idea of no collision unless voluntary or acted upon by another pilot).

So, in short my probable method: Players set moves at the beginning of the turn. They then take actions in Atomic Robo pick order- executing both move and standard action. Actual range determines ranges, rather than zone counting. I assume I’ll also have some scene aspects (like darkness, choppy skies, packs of gulls, steel canyons, etc).

CHARACTERS
On the character side I’m probably going to add four new skills. I’ll also look to see if I can consolidate others to keep the total numbers low.


I’ll probably want to have a few pilot-based stunts associated with that. Some of that should be easy to adapt over from existing stunts.

In terms of the Action Cards categories: Mental is used for spotting and repairs. Physical is used for maneuvers and defenses. Combat is used for attack and setting things up. Social is used for leadership, coordination and reading the enemy.

There was a brief moment when I considered having players use a separate deck for this plane. That seems crazy. I still think that mechanic might work for a shared resource or ship (ala Firefly or Ashen Stars).

PLANES
Each player gets to build their plane as they’d build a character. They get X stunts to build these. We’d begin with a set of basic templates. This would cover weight, speed, and maneuver dial. Different templates have a different initial Stunt cost. Afterwards they can spend stunts to upgrade in different areas.

Weapons: Different weapons have different arcs, different damage, different tags, and different effects (i.e. spend fate point or damage to do something). We’re making this a little more granular on the table, but I don’t want to go nuts with this. Keep the number of options reasonably small. Action Cards uses diced damage, so that opens up the possibilities- but don’t go nuts with this. Maybe 5-8 weapon options?

Maneuvers: By this I mean the base movement dial. Consider the different between fast, agile, and reliable. Put these on cards which players can then mark. I think this will be based on the plane frame/template they choose. Should they be able to modify this further?

Damage Capacity: We’ve got two factors here: Stress and Armor. Stress should be tied to the template, perhaps with a max number you could buy after that. We use straight damage pool for the diced damage. Any potential armor has two factors: # needed to cause stress against it and damage reduction. Those can be big factors, so probably worth tying heavier versions to a drawback or trouble aspect.

Extra Features: Perhaps planes have some particular Stunts? Some of that might reflect capacities, like better visuals, ejection seat, a co-pilot, etc. In particular a co-pilot might be funny as an aspect/means of absorbing a consequence. Nitro boost. Bomber. Flak or chaff. Camouflage?

Initiative # (as a measure of plane and pilot): This depends on how I want to handle initiative. If I parallel X-Wing I’ll need to have a number for this. But since I’ll likely just go with standard picked action order I can skip this.

DOGFIGHTING
I’ve mentioned the use of Attack Wing Dials for movement. I might add elevation as a factor, but keep it super simple: low, medium, and high. Low allows attacks on ground targets. It might also allow for cover/interaction with terrain features (i.e. fights in canyons, in-between skyscrapers). A difference in elevation would add a range tick. Short medium long.

Have to figure out if I need rules for Ramming, Close Contact, Smoke and Chaff. Worth separating out into some other system or fold into usual resolution mechanics
.
Types of Plane Actions- parallel personal actions.


Should there be some typical “dogfighting”maneuvers we have laid out on the reference chart? These would have fairly defined effects:


Most Important: Clark Valentine’s Kriegszeppelin Valkyrie has an awesome mechanic which needs to be used. Planes cannot do full damage on a target unless they have created an advantage against that target (representing maneuvers). I assume environment aspects or team created ones could be used for this.

Redlining: The “Wing” games have a mechanic where pilots gain stress tokens. They have to clear those tokens before performing other actions. Most of the time stress tokens come from taking a particular maneuver. Red colored moves on the dial indicate these. They can be cleared by performing a Green colored maneuver. Stress can also come from damage effects or the use of some upgrade cards

I think we’ll use a version of this which I’m going to call Redlining. Players gain a “Redlined” state when they take certain maneuvers, as a Consequence, or as a cost on some Stunts (equivalent to spending a Fate point?). To clear a Redlining, the pilot must perform a Green move on their dial or else use some kind of Stunt to clear it. Have to think about this.
What are the effects of Redlining? I’m thinking that while in this state, you can only do standard Attack and Movement. I have to figure out exactly what that means. I’d allow for Defend against actions normally, or perhaps you might lose Defend ties while Redlined. Affected pilots wouldn’t be able to use Stunt effects (except those which would clear the Redlining).

I also want to have sky monsters, so I have to figure that out...

OK, so that’s my starting place. A few sketches to get my thoughts in order. When I have some more concrete rules, I’ll probably post those. I’ll also post my “23 Things About the World of Sky Racers Unlimited” when I get that done. Before then I’ll have to go and reread some of the gaming sources: Crimson Skies material (FASA and WizKids), Night Witches, Romance in the Air, Kriegszeppelin Zeppelin Fate, and Warbirds.
Posted by Lowell Francis at 12:53 PM