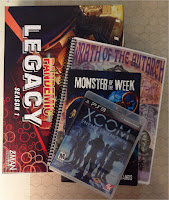 Welcome to Year Eight of the Blog. If this were Supernatural, my niece would have told you to stop watching several seasons ago.

RESTLESS GM SYNDROME
Like most GMs (I assume) I enjoy coming up with campaign & rules hacks I'll never get to the table. You can find traces scattered across Age of Ravens. I have hope, though. In 2015 I managed to get my Crimson Skies/X-Wing/Action Cards hybrid to the table and it worked. Right now I have several ideas on my Kanban board. This one's perhaps the most ambitious.

Steve Sigety and I have talked about an X-Com RPG. We've seen iterations of this including a Savage Worlds version. The video game itself has you switching between turn-based firefight missions and organizational management. I wanted a way to approximate that feeling and transition.

Alien of the Week aims to create an X-Com-like episodic game with an overall campaign structure. I’m building on Monster of the Week, but adding elements of the Pandemic board game along with seasonal and development structures I've seen most recently in Wrath of the Autarch. I have only sketches, just enough for you to see the shape. There's potential but it would require a serious investment of time.

What it isn't: AotW doesn’t simulate the tactical nature of missions play in X-Com. You could probably do that by dropping in a crunchy system for MotW. You’d probably have a miniatures game at that point. I'm interested in the big picture. That's hypocritical because I didn't dig the recent X-Com board game because it handwaved the missions. We'll see how far that hypocrisy carries me.

M-COM
At heart we use Monster of the Week 2e. The players start as members of the X-Com Authority. The game sets some basic structures for that group: national/international; high tech; government funded; operating behind the scenes; access to resources; military backing. But the group should discuss what that looks like on the ground. They can shape the tone from that. Importantly the PC's aren't soldiers, they’re the investigators, researchers, scientists, and agents sent into the field to figure out weirdness. The agency actively recruited some characters while others just fell into it.

Each Monster of the Week episode/session revolves around an alien plot: mind-controlling, pod-people, kidnapping subjects, infiltrators, etc. In the mission, players want to uncover the Big bad and stop it. But they also want to acquire intelligence, find salvage, and figure out precisely who their enemy truly is.

Alien of the Week assumes no magic. Instead psychics, psionics, and mentalists fill that gap. Some Playbooks won’t work without heavy modification, like The Chosen and The Monstrous. Maybe you could transform those into someone who discovers they have alien DNA, an experimented-on abduction escapee, or even a failed super solider made by grafting ET tech. On the other hand, The Initiate might work if you assume an ancient group dedicated to fighting aliens. It could be modern, formed after Roswell. The Spell-Slinger would be a potent psychic, but might be over the top.  I haven’t figured out how you’d do The Divine.

Many others work straight or with minor changes:
Off the top of my head I imagine two more playbooks done independently or as mods of existing ones: The Soldier and The Tech. I haven't looked at the extended set of playbooks. I imagine I'd find some more there. 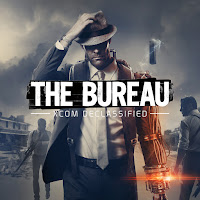 YOUR MISSION, COMMANDER
For each session, players get a choice of two missions. Present some of the operations scope in the briefing: Investigation of Strange Phenomena, Possible Alien Salvage, Rescue of Citizens, Dealing with Weird Killings. The choice of locale can affect the Panic levels and possibly offer bonuses. These should be clear to players. Otherwise you build missions and operations as usual, just with aliens behind the scenes. X-Files, Conspiracy X, Dark Skies, or the like can serve as useful plot sources. Retool classic Supernatural episodes with an extraterrestrial monster.

Sidebar: You'll need to decide if you want to run International Missions or focus on North America. International stays closer to the original X-Com. It opens up questions of language, sovereignty, translation, and culture. You could handwave a chunk of that. Or ask each player to come from a different region. They can then take point based on the mission location. Cultural difficulties shouldn’t get in the way too much- this is cinematic not realistic and MotW wants you to get to the mystery. On the other hand, a North American, US, or specific national focus avoids those questions. Players can more easily blend into the situation and remain secret. That loses some X-Com flavor so I’m not sure which approach is better. Discussing it with the players.

After a successful mission, players pick some “meta-rewards” in additional to character advances. Some come baked into a particular scenario (like discovering an intact base or finding a downed saucer). These could be extra X-Com "experience" to buy organizational advances in different areas. It might also be access to new moves or extra reduction in the panic level somewhere.  You might have the group negotiate or develop fiction for these rewards. I imagine later players could develop new move allowing the group more salvage or intelligence from operations.

SETTING THE BUDGET
At end, beginning, or between sessions, players choose advances for the X-Com organization. Player budget for the three tracks: Research & Development, Defense, and Field Operations. This comes from a general experience pool the GM offers.
Some missions add bonuses to an area. If the group captures an intact alien weapon, that might give an R&D bonus. Rescuing the son of politician could incline that official to offer military assistance. Making contact with a team of underground amateur observers should deliver significant info.

These advances would be organized on a tech tree. players have to make hard choices about what they invest in. I mentioned Wrath of the Autarch above. It has some great examples of how to set up these kinds of tree for a community or group. I'd use that as a model. This would probably take the most work for this hack. Picks should give different kinds of bennies, some ongoing, some one time. The best would have prerequisite advances or fiction (i.e. we need a live captured alien for this).  These picks would create new fiction, would answer questions, add team resources, and most importantly affect the Big Board. 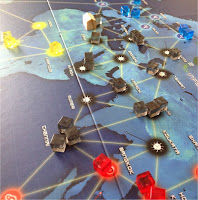 THE BIG BOARD
Here’s the most board gamey part of the whole venture. You would use a Pandemic board (or even better a Pandemic Legacy board if you’ve finished with it). Altenrately you could maybe rework X-Com BG board or come up with your own. Pandemic uses different colored cubes to track different diseases. These can increase and spread. Alien influence and terror way, tracking Panic. The game begins with a seeded board places already hit by alien operations. Player operations clear panic nearby locations (and it should be clear to players what area will be cleared when they pick). Then, depending on their X-Com Initiative resources and picks, they can clear some more areas. This should happen after buying organizational advances.

Then the GM uses their moves.  First the draw cards to see where Panic increases or explodes. As in Pandemic, more than three cubes on spot can either expode panic into neighboring areas or trigger a GM move. GMs use moves to determine new events based on a suggestion list. Sometimes events will pop up and change things or create hard choices. This large scale moves trigger based on Panic explosions, board state, failed organizational checks, or even player actions during a mission. You'd need loose tools for generating that.

The GM should still has some leeway on picks, but they can let players make hard choices (something like The Quiet Year). As the game progresses, Panic increases in different cultural zones , using use different color cubes. Alternately the color of the cubes might represent different kinds of aliens or alien operations. “Discovering a Cure” and “Eradication” of a disease there would represent figuring out effective counter measures. As the game progresses on the GMs move set may change. The board alters, a new ambiguous force arrives, or places convert to the aliens’ side.

The End Game would come from a triggered move leading to a final showdown mission. Choices the players have made throughout set the stakes, determine their level of opposition, and decide what happens afterwards. I’m not sure how you would kick that off: a particular Panic level, eradication of some alien forces, reaching certain tech tree levels, or X number of sessions.

LAST THOUGHTS
One theme running through this campaign should be the discovery of the nature, agenda, and weaknesses of their alien enemies. There may be several of them. Night’s Black Agents offers a good model for this in play. Figuring out your enemy is as important as stopping their operations. Knowledge pays forward.

That can be complicated. Aliens should have quislings and they could be a faction unto themselves. There should be several forms of the aliens, with different qualities. The players need to puzzle out how these groups fit together.

I should note that Wrath of the Autarch offers a competitive model for this kind of play. I don’t think that works as well here. Or rather I doing that justice would require an massive tuning and balancing. I think that structuring changes as GM Moves would work .

I think it’s a cool idea. It would take a cool of weeks of work probably to bang out a full, playable version of this. If I get ambitious later in the year I might try it.

What do you think? Too goofy? Not crunchy enough? Too vague?
Posted by Lowell Francis at 1:10 PM