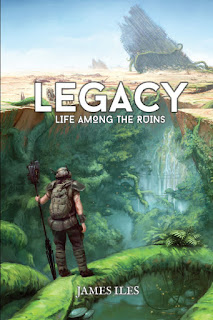 THROUGH THE AGES
For the last several weeks I’ve run sessions of Legacy: Life Among the Ruins as part of The Gauntlet Hangouts. Legacy’s a post-apocalyptic PbtA game, but with a vastly different focus than Apocalypse World. First, your world’s explicitly fantastic. Perhaps genetically-engineered super fauna grew intelligent and took over before dying out. Or dimensional gate technology went wild changing the landscape and crashing civilization. You need that weirdness, akin to Numenera’s, in your apocalypse. The Fall leaves behind strange and wondrous relics and locations you uncover in play. You could craft a more grounded game, but that would make it harder for the game to do its job.

Second, you’re intended to operate on a different level than AW. Each player chooses both a Family Playbook and a Character Playbook. You do the same kind of character creation process for the former: setting stats, picking moves, developing backstory, making connections. Your choice of family shapes your “Big Picture” goals for your character. In play you choose what your family does, meaning you may have to roll moves for them. Your character’s influential by default (though you could run them as independent or even opposed). Families have surpluses & needs, make treaties, and have basic moves. Overall that’s one of Legacy’s best innovations. Third, the game’s intended to be generational. You work through the threats and problems for an era, roll for your family’s changes in the Turning of the Ages, and then make up new PCs for the next age. With only three sessions, one for character creation and two for play, we didn’t get to this. You might play for many sessions before ever deciding to skip forward. It isn’t a threat hanging over the game, but rather an escape valve allowing you to refresh the setting.

THROUGH THE GAUNTLET
The Gauntlet crew graciously had me on for this week’s episode and we talked about what we thought of the Legacy. It’s a good discussion and one worth listening to. I’ve also posted videos of our two sessions of actual play (Session One and Session Two). Unfortunately technical errors meant I didn’t record the creation session. That’s too bad because everyone dug it and their creativity amazed me. There’s a real pleasure in building the family, the locale, and then the individual characters. You’re able to drill down through the details.

In any case, you can hear my overall impressions in the podcast. The short version: Legacy offers an ambitious take on PbtA and on post-apocalyptic gaming. It has some great ideas and elements worth looking at. I’m glad I bought and ran it. If the concept interests you at all, consider picking it up. I should mention that Legacy: Life Among the Ruins and a host of other PbtA games are on sale right now at Drivethru.

But I’m not sure I figured out or ran the game that Legacy has on offer. You can hear that in the podcast- it’s the first topic we cover. I’ll eventually come back and do a full formal review. I found Legacy inspiring and interesting, but lacking in guidance about to actually structure play. I switched things up between the two sessions I recorded, trying to move to a more meta-level. I’m not sure that entirely worked. Much as with Crowsmantle, I think starting off on the wrong foot hurt me. A completely different approach might have worked. I’m not sure and I may come back to that later. In next week’s Gauntlet episode we talk about Legacy again and offer some final thoughts. I’ll post that when the show drops.

In the meantime, below you’ll find our summary of the characters and world we built in that first session. We also drew a map, always a good thing. This illustrates the kinds of ideas you can generate with Legacy. 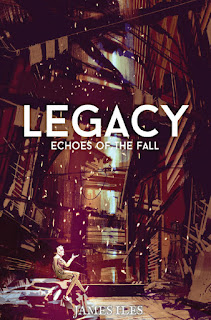 CHARACTER CREATION MATERIALS
The Shepherds (Gilded Company) Company of Merchants
Dispersed. Travel around on the Lobster horses. These are genetically modified beasts. They vary in size and color, from riding horse size to massive monstrosities. They’re also genetically engineered to be delicious. The Shepherds have scattered due to recent incidents. Hence their needs: Justice & Leadership.

PC: Santo Shepherd: An envoy who, like many of his family, dresses in wild and striking fashion. He’s in his thirties, but looks younger. He has a magnificent Tayshin riding beast and a pragmatic servant/ stablemaster who cares for it.

Enclave of Bygone Lore
Vat-Grown duplicates. They’re identical in appearance. When they come of age, each obtains an encounter suit as a rite of passage. They decorate these uniquely to express their identity. The family lives in starship wreckage. Others live in the settlement with them as well. The Enclave possess some wonders, but the primary of these is a massive turret weapon affixed to the starship ruins. It is recharged via mystical sacrifice. They’re less driven than other families, with more leisure time. Some consider them lazy.

PC: The One Who Strides into the Wastes (…foolishly): A hunter who has an elaborate encounter suit marking his identity. He’s a powerful stalker who knows how to handle monsters with his absurdly large sniper rifle. He has a small floating drone named Ioun who gives him insight and advice.

The Twice-Born (Tyrant Kings)
A barbaric group: leather and sharp points. They control their area tightly, with a group of slaves as servants. When they reach a certain age, the family throws children into a massive pit called The Womb. It’s honeycombed with tunnels and has all manner of dangerous creatures. Throwing new beasts down in is a common activity. When a child manages to climb up the side of the pit, family members stand nearby watching to see if they make it. If they do then there’s a great celebration.

The Twice-Born need medicine, culture, contacts. They believe in a rebirth of the entire world. Their current leader senses a need for her family to develop connections with the others. This is a dangerous idea and likely will put her at odds with other members of her tribe. Her name is Xorelle, and she is the leader by virtue of being the oldest female in the family. They’re suspicious and afraid of the mysterious black obelisks.

The Errant Justice (Lawgivers of the Wasteland)
They operate a dispersed family of Gunslingers. These act as a network of justice. Each gunslinger has their own territory staked out, usually set up by one of the black monoliths. They make good time around the region as everyone gets out of their way. They’re well respected, but low in number. They need recruits.

Each gunslinger as a unique gun, their Iron. They also are supposed to have an apprentice who carries their own gun, the Pewter. The family protects the wronged, those with grievances. In particular they act to bring justice to the misers and hoarders. In pursuit of that justice, they’ll do many things but won’t stoop to extortion.

PC: Jack Cartwright: A Survivor. He’s among the small number of remaining lawmen. He’s seen many of his friends die. He has two Irons and two Pewters in his possession, having picked them up from fallen friends and apprentices. He searches for another recruit he can mentor. Cartwright’s a solid guide in the region.


How did this come to be? Upper echelons and elite of society believed a disaster loomed in the future. They departed in spaceships, with at least some of them going to the moon. While no massive cataclysm struck the world, the infrastructure collapsed creating an ecological disaster as well as the detonation of massive machines. The systems regulating the land, weather, and agriculture broke down or went haywire. This created the wastes.


SETTLEMENTS
The Nursery: Twice-Born homeland. It lies on the shore of the Fountain. It gives them access to and control of a fresh water source. They celebrate periodically when a survivor child emerges from the Womb pit. They keep slaves: it is taboo for a slave to look a member of the family in the eyes. That’s a challenge and an affront.
Scavageton: Like an oil field town, the populace go out into the Hollow Mountain to excavate and scavenge tech. It’s extremely risky and the survivors party hard, particularly after a successful run. They don’t travel out during the day- that’s the time when the dangerous mechanicals within the mountain are most active.
New Oasin: “The Big City.” The largest and most populous settlement in the region (150 people!). They live under the shelter of an enormous dome. New Oasins believe themselves to be the “first city” and carry a sense of cultural superiority. The monogamous and those who don’t contribute to procreation are treated with disdain.
Enclave of Enlightenment: Home settlement of the Enclave, a crashed spaceship. Others live there besides Enclave family members. Those of the Enclave avoid addressing people by name directly. Instead they use alternate names and titles to reference them. This habit rubs off on non-Enclave persons living there. There’s also a general ethos in the settlement that sex is icky and unpleasant. People do not discuss such things.
Banarjee: A cliff-dwelling settlement built within a chasm. There’s a great junk and wreckage pile at the bottom. The people of Banarjee produce a large amount of food, primarily mushroom or fungus-based. They avoid eating animal flesh and prohibit others from doing so within their walls. When Banarjee youths reach adulthood, groups of them will make a long trek out into the waste as a rite of passage.
Posted by Lowell Francis at 11:10 AM