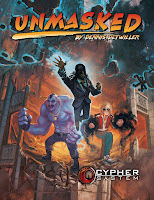 I’m running three different Cypher System games this month, as I mentioned in this post on my Cypher System cheat sheet. Both Fall of the Gods and Predation have excellent pre-gens in their quick-starts. Unmasked does not, but that gave me the opportunity to dive into the character creation process. I asked the players to pick their descriptors and class. I also had them outline the kinds of powers they’d like and I hunted down fitting foci. You can see the results below.

Unmasked characters have two parts: their teen selves and their “Mask” selves. It’s a great concept, with a tug-of-war or split happening between those. In a few cases I stuck took parts from some of the class themes in the Cypher core book to make the players’ concepts work. These are all Tier 1 Effort 1 characters, but I gave them two extra abilities because we’re only playing four sessions. You can watch the video for Session One here. You can also find my revised Cypher 1P Cheat here.