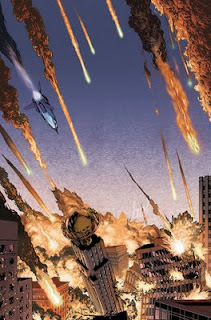 So some updates on current work first:

Comic Book Resources has an interview with Scott Snyder and I about the upcoming Project Superman mini-series. I co-plotted and am doing the script. It is part of the upcoming Flashpoint event from DC this summer.

You can read the interview here.

Of course besides having the chance to work with Snyder, I also get the opportunity to work with Gene and Art! so that's pretty amazing. Plus there's at least one rpg reference in the first issue. This issue will be out in June. 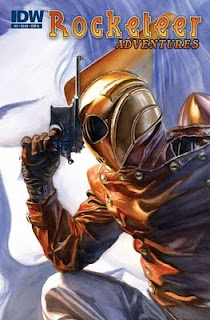 Also out in June is a story I did with Gene for the new Rocketeer Adventures from IDW. These anthologies allow creators to write up new short stories using the classic Dave Stevens characters. The pages look great- and this should be a pretty incredible book. Here's the solicitation text:

Rocketeer Adventures #2 (of 4)
Darwyn Cooke, Lowell Francis, Mark Waid (w) • Darwyn Cooke, Gene Ha, Chris Weston, Pinups by Geof Darrow (a) • Alex Ross, Dave Stevens (c)
This issue of ROCKETEER ADVENTURES continues to soar with a trio of stories crafted by masterful comics creators. Mark Waid and Chris Weston provide a pulse-pounding story of revenge set to a colorful backdrop of the opening of the Golden Gate Bridge, Lowell Francis and Gene Ha put Cliff through his paces in an-all action extravaganza that has him fighting tooth and nail for his very survival—plus a special guest star! Finally, Darwyn Cooke delivers the goods (as always!) with a tale that we won't say one word about—it's too good to even hint at and ruin the surprise! Plus, a pair of pin-ups, BOTH by Geof Darrow—his incredible piece was just too massive to be held to the confines of a single page, so he’s supplying a gorgeous TWO-PAGE pin-up!
*2 regular covers will be shipped in a 4-to-1 ratio (4 Alex Ross, 1 Dave Stevens sketch cover)
FC • 32 pages • $3.99 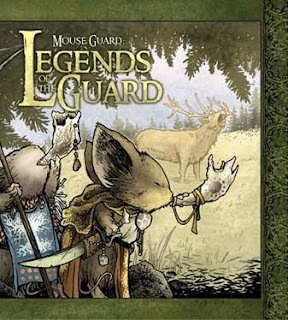 Finally, Legends of the Guard won a Gem award for Best 2010 Anthology. Even more interesting, it has been nominated for an Eisner Award for best Anthology. I only have one story in there, but I can claim an Eisner by proxy nomination...right?

GAME LINKS
*I've tried Loot a couple of times now- picking up Spirit of the Century and Maschine Zeit. I'm really happy with the service. Loot is essentially an rpg version of Woot or Tanga. I've been pleased that it has had things which I wanted to pick up, rather than exclusively OSR, Pathfinder or the like.

*Berin Kinsman has an interesting free pdf available called "The Tao of Rules Hacking" which you can find here. It is an interesting read and worth looking at if you're doing some rules rebuilding (as I've done recently).

*World vs. Hero is an interesting game with a kind of free-form two-player positioning. I'd submitted it as an rpg item for RPG Geek, but the decision was that the game presented itself more as an board game and so it went to the BG side. I'm not sure about that. Anyway, the author of that game has an interesting blog with some worthwhile insights.

*A really good article on player attachment from Casting Shadows.

*I can't recall how I stumbled on this article looking at the "table cost" of rules for rpgs. It has a fairly mechanical approach- but the key ideas hold true across the board. Really interesting fodder for thinking about games.

*Here's an article for writers posing the question "What if your characters don't want anything?". That's an interesting question to pose about players- especially given that earlier essay on player attachment. Sometimes players either don't know their motivation or else hide it so that they can't get tagged from it.

*Leviathans, the only miniatures game I'm looking forward to.
Posted by Lowell Francis at 12:35 PM