Action Cards: What the What? 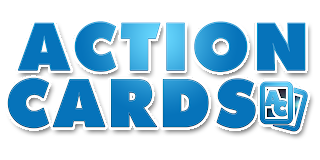 I'm finishing up prep and printing for my two Origins Games on Demand options. Both use Action Cards, the game I'm most comfortable with. I've talked about that homebrew before; it's what I've used for most long-term campaigns in the last decade and a half. You can see a brief overview of it here, though some details have changed. I've been working on a full, complete version of the rules and I'm about 95% done with the rough text. I drew this post from that to act as a companion piece to the overview. I discuss the basics, how Fate fits with AC, and where it came from.

WHAT IS ACTION CARDS?

Action Cards is an rpg using individual character decks as a randomizer. Each deck is tailored to a particular character and contains with several unique cards. When you test for an action, you draw a card and check the results. Most cards have results across four categories, while others have special effects, offer choices, or allow you to narrate the results. Your decks can be marked up, modified, or gain new cards over the course of a campaign. It acts as unique dice for your character. It evolves and changes with play.

WHAT DO PLAYERS HAVE BESIDES DECKS?
You have a character sheet to record skills, damage, aspects, and special abilities. Depending on how the GM sets things, this sheet can be minimal. You’ll also have tokens for fate points to spend and possibly dice for damage (depending on the options).
Action cards has two ways to create characters: standard and draft.

CHARACTER CREATION: STANDARD
In basic character creation you get a deck twenty-four card deck. Six have results pre-written in in the four areas, common to all decks: Social, Physical, Combat, and Mental. Eight have blank results. You distribute ratings among these: Catastrophic, Bad, Just Missed, OK, Great, and Amazing. How many depends on the campaign. Next you have six special cards all decks share. Finally each deck has four blank cards. You’ll create unique cards for your character- one all-around positive, two mixed, and one bad. After assigning results to your deck, you’ll pick skills and stunts based on the setting.

CHARACTER CREATION: DRAFT
For one shots or short campaigns, you can draft your decks. Everyone begins with a set of common result and special cards. You then draft additional result cards. In this process, you try to grab the best results for your character’s focus. You also draft two good and one bad unique cards to fill out you deck. Draft decks will usually be tailored to the genre and setting, with different effects and card titles. As above you finish out character creation by picking skills and stunts.

HOW DO YOU PLAY?
When making a test, the GM tells you the result needed to succeed and what kind of draw to make (i.e. a Great Physical pull). You draw and check if you’re happy with the result. If not you have the option to repull by using a relevant skill or invoking an aspect with a fate point. Alternately you can invoke that aspect to raise the result by one degree. You can use various means to redraw up to twice, but have to go with your final draw.

You usually reshuffle your deck after every couple of scenes and after every three rounds in combat. GMs can also call for a reshuffle if decks are getting low. You can spend a fate point to reshuffle at any time. The GM reshuffles their deck more frequently.

Many cards have catches or dramatic options on them. Unique cards may require you figure out how your action fits with the fiction. You always have the opportunity to control this narration, but the GM can also take it over if you get stuck.

WHAT DOES THE GM DO?
When running an active opposition- mooks, bad guys, monsters, etc- the GM uses their own 32-card deck. It contains several unique cards, but mostly result cards broken into four categories representing quality: Average, Trained, Skilled, and Elite. NPCs fit overall in one of these categories. They’re further tuned with Skills (redraws), Qualities (+1 to the result for something specific), Aspects, and Stunts.

OPTIONS
Action Cards works as toolkit. In a few places the GM or group decide how you’re going to handle things at the table (skills, damage). There’s a strong core, but plenty of ways to tweak what’s here. We’ve used variations for different kinds of campaigns. Small tweaks- like increasing to decreasing the time between reshuffles- can dramatically impact the tension.

WHAT THE WHAT?
Reading-- but not getting to play-- two games influenced me to put together Action Cards: Lace & Steel and Castle Falkenstein. The former has a card-driven dueling & repartee system. The latter uses playing cards for resolution. I’d also tried an early attempt at a CCG rpg, DragonStorm but the group didn’t like it. In the background I had my dissatisfaction with Rolemaster, Champions, GURPS, and my various homebrews, all of which I was still running. When I finally sat down to write up the game, I knew I wanted a few things:
Those elements have remained true throughout the various versions. We’ve bolted a ton of extra modules to Action Cards: action points & countdown initiative, combat styles, traits with global bumps, hit locations, weird deck manipulation, additional factors like mana on cards, wound levels, and more. And we’ve jettisoned those over time. Usually the changes have been to simplify elements. Some have added granularity (like our Damage options).

ORIGIN STORIES
We started playing Action Cards in 1999, beginning with a swashbuckler mini-campaign done for a friend’s group, and then two modern urban fantasy campaigns. From there I kept refining, tuning, and changing the game to fit many different campaigns. In 2011-2012 I tried to play around with Strands of Fate. I’d read Spirit of the Century & Diaspora but I couldn’t figure them out. I missed something. But Strands, a game I ultimately didn’t like, finally gave me insight into Aspects. That idea fit with many things I’d been trying to do with Action Cards and took over for a whole range of messy mechanics. Eventually I brought over other elements: action types to establish a clear language, stress & consequences, a set skill list, and stunts as an organization system for feat-like things.

Why play Action Cards?
…if you like the idea of a card-based rpg.
…if you dig the concept of marking up cards Legacy-style.
…if you like Fate but hate the dice.
…if you’re intrigued by the thought of card-counting and push-your-luck in an rpg.
…if you want toolkit relatively easy to tweak to various genres.
…if you like goofing with new systems.

The beta version I'm finishing up is intended to get the basics down in one place for Action Cards after years of play and multiple iterations. I've added options throughout the book. It is a toolkit. All of that with terrible layout and minimal art! So far I’ve only included a few of the campaign frames, enough to give you a feel for how they operate. They’re also the ones I have draft deck versions available for. A full version will have more. Even more importantly the next version will include a discussion of how to adapt the idea of Action Cards to a more conventional Fate game. I hope that will serve the additional audiences of GMs who like reading new setting material and people who really dig Fate but want to tweak it.

WHAT’S FATE HERE?
You’ll see other bits and pieces as well. We draw from the Fate SRD so several major concepts.

WHAT’S NOT FATE HERE?
So that's the basics. I hope to have a "beta" document (plus deck files) up on DriveThru in the next couple of months (before Gen Con I hope). I'm not under any illusions this is the greatest rpg out there. But it is the system I've tuned to my GMing style. At the same time, I've seen other GMs successfully tweak it to their approach. I want to put together a version for interested gamers which they can run or borrow ideas from for their own games.
Posted by Lowell Francis at 11:54 AM