Another day, another image from the archives. In the mid-1980’s I ran a Champions campaign called "Saviors." Originally my sister Cat Rambo GM’d it and then I shifted over to that seat. It was our Watchmen-homage campaign. The Dark Knight, Batman Year One, The Question, The New Statesmen, Miracleman, V for Vendetta, and a ton of other sources influenced us. In this world there’d been superbeings during WW2, but none since. The few supers who survived had died out or been killed. Many regarded them as myths. The actual campaign dealt with a new generation of contemporary non- powered vigilantes.  That would change as time went on...

The campaign stretched over several years real time, with a rotating cast of PCs and players. Art Lyon (colorist) drew this late in the arc. From left to right we have Guardian? (front), BUD (Big Ugly Dude), Bolo, Spinerette (NPC), Defender (NPC ambiguous patron), Public Defender (NPC), Fixer, Captain Danger, and Captain America. The pictures on the wall are all dead PCs. In the end Fixer and Guardian killed Defender & company, sold out the world to an evil corporation, and framed Bolo for it. Oh and prior to that Guardian broke BUD’s back.

It was a dark game, featuring the nuking of an American city. But the real world is often darker.

Eventually I came back to the setting, running a lengthy Cyberpunk-ish supers game set in the far-off future of  2017. That took place in the dystopian world the previous PCs had created. Much later I tried to run another version, but it didn’t work. The combination of Champions and the changing of the times made it not what we wanted to play. I’m not sure I could dystopian anymore; not sure I’d want to.

(This is a color scan and print from the days when color laser printing wasn't awesome. Hence the loss of fidelity). 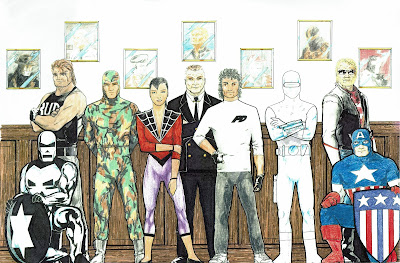 Posted by Lowell Francis at 9:59 AM