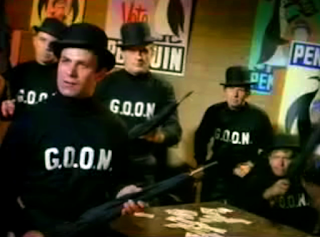 WATCHMAKER’S ANALOGY
7th Sea has smart game-tech that sticks with me. These mechanics don’t overburden players but instead encourage certain play. More than anything these strike me as clever bits that actually work at table. It’s as simple as calling the ranged skill “Aim.” I’ve always calling that Ranged Combat or Shoot. Aim works and feels right. There’s much to love in 7th Sea including novel takes on mooks, advancement, teamwork, and more. They’re bit that contribute to an awesome whole.

There’s been recent discussions the idea or mis-idea of something being a PbtA game. Do we label it that holistically or from the discrete components? Like many, I suspect it doesn’t matter much. But some games get it right, putting the pieces together so something greater emerges. Consider The Watch, currently kickstarting. It pulls together tech from many sources: a strong AW base, conditions (MH and elsewhere), a “day/night” split (Nightwitches), and adds to that new kinds of choices for moves. There’s more, but the final result is both amazeballs and wonderfully inevitable. They’ve done a great job of seeing sub-systems and picturing how they could come together.

Anyway I love thinking about sub-systems how they might work elsewhere. In this series I want to “inventory” the approaches to these niche mechanics. I’ll try to cite an example for each one. I’m hoping others will chime in with different mechanics I haven’t seen.

HENCH 4 LIFE
Feng Shui gave me my first and most enduring label for the concept of mass low-level foes: Mooks. That game considered the architecture of a fight scene: environment, challenge, motion. I demonstrated that, while not exactly window dressing, mooks existed threaten and provide satisfying punching-bags. I’d never really thought about it that way. I’d had agents or low-level foes, but they operated like any other adversary. They could drag a fight out or create problems through sheer die roll volume. Nothing like getting K.O’d by a lucky stray shot from a punk. To avoid problems, I usually focused on an equal number of adversaries or a single large foe.

New “mook” mechanics opened up my combat. I strated simply. In GURPS I declared certain minor foes took double damage. I could have just halved their Hits, but it proved infinitely more satisfying to tell the players to multiply their damage. After that Mooks became a standard element in my repertoire, allowing me to including many more foes without increasing fight length. We used minis, so it made things look awesome and terrifying.

Anyway here are eleven approaches I’ve seen in games. Some of these overlap; some represent primary approaches and others add-ons. I’ve provided a single example, I’m sure there are many more for each of these. If you see an approach I have considered, please leave a note in the comments. 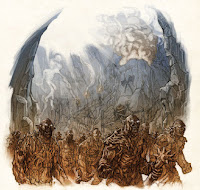 WAYS TO MODEL MOOKS IN RPGS
LOWER LEVEL (Baseline)
Used in standard level-based games. Lesser foes are simply lower HD or the like. Otherwise they work the same as any other monster or adversary. Certain kinds of swarms may have individual rules. Level difference means these foes represent less of a threat, especially for advanced PCs. They’re still dangerous at starter levels because of the relative ranges there. (Dungeons & Dragons)

ABSTRACTION
A whole group of foes is modelled as a single character. That group together might be equal in power to a single named foe. They may have access to different abilities based on the fictional positioning (i.e. can occupy more space). Can be used for more nebulous effects. (Fate)

COLLATERAL DAMAGE
Foes operate on a different scale from PCs. The PCs get an extra damage die to roll. They don’t have to hit with an attack. Instead each round, this takes out nearby foes of equal or less HD. Imagine it as the casual effects of combat: minions thrown about without the PC’s even blinking. Called a “Fray Die” in Godbound. (Godbound).

COLLECTIVE HP
Mooks attack and defend as normal characters. However, a collective mook group is reduced by one warrior for every X HP done. For example, a ten person group with 8HP each. The player targets one of the mooks and does 35 points of damage. The GM/player describes taking down four of them (and nicking a fifth). (13th Age)

EQUIPMENT
Mooks and henchmen are modelled as armor, hit points, or even weapons. This abstracts these forces into stats and bonuses attached to a primary foe or situation. Alternately may be part of a major foe’s skills, for example in building a dice pool they might throw in dice based on their henchgroup. (Exalted 2e’s Mass Combat)

INVULNERABILITY
Mooks cannot affect PCs until these minion do something: invoke an advantage, gang up, make a maneuver. Then they can cause an effect (damage, restraint, etc). Related, PCs may be able to buy defenses which shrug off attacks of a certain rank or below. (Mutants & Masterminds)

MANEUVERS
Not explicitly defined as “anti-mook.” Some games have options for multi-fire or split attacks. Usually a PC can try to hit several foes with a reduced attack and/or damage value. This makes the option less useful for significant or named foes. Instead it’s most effective in dealing with weaker targets like mooks. (Champions)

MORALE
The system includes mechanics for foes breaking, fleeing, or surrendering. These systems have been geared to remove mook groups from the table once they take significant damage. There may also be options for the PCs to attempt to activate morale checks. Judd Karlman reminded me of this when he ran Godbound. (Various OSR).

ONE-SHOT
Mooks generally act like other characters, but a single hit from a PC removes them. They attack and defend as normal vs. the players, but typically have lower skills. However they can still deal serious damage. (Feng Shui)

RISK OBSTACLE
A mook group defined as a challenge of X strength; it doesn’t act with individual members. Instead players reduce the strength of the mob through actions/damage. The remaining strength at the end of a round is dealt as damage to players. Squads may also have some special abilities triggered via a resource spend. (7th Sea).

TECHNIQUES
Mooks function normally, but the PCs can take build options: advantages, feats, powers, stunts, to take them out more easily. Do double damage, K.O. on a hit, spend a hero point to defeat a mob, etc. (Fate Versions).

VULNERABILITY
Mooks take additional damage from PCs. Could be flat number, multipliers, or extra dice. As mentioned above, an alternative to simply lowering the average HP of the foes. A variant is to have mooks take maximum effect when taking a hit or failing a save. (Mutants & Masterminds).

What have I missed?
Posted by Lowell Francis at 2:40 PM