A couple of friends in my gaming circle generously offered guest posts for this month, to help me round out the year with some different voices and ideas. Today's post comes from Steve Sigety, who blogs at Kaijuville. Steve and I have played together since- I think- the mid '90's. He's run Call of Cthulhu & AFMBE for me, and I've run CoC, GURPS, M&M, d20 and our homebrew for him.

Two Influences on my Gaming Life

Like most people I'm a product of my influences, and that is particularly true of my gaming hobby, whether it means video games, board gaming or tabletop role-playing games. The experiences I've had with elements of popular culture have affected how I play and run RPGs. These various cultural properties have taught me many lessons, and represent many different attributes. In this post, I'll discuss what a novel and a television series taught me about gaming.

If you delve deeply into Robert E. Howard fandom, eventually you will encounter the arguments about L. Sprague de Camp and his role as editor in charge of Conan and other Howard characters and stories. While I understand the fervor -- and when looking at his role in changing and adapting stories in order to gain ownership, I agree with the reasons -- it has to be acknowledged that de Camp played a vital role in popularizing Howard's work in the mainstream of popular culture. One reason that I will give de Camp a pass on this score that he is partially responsible for one of my favorite books, Conan the Conqueror. 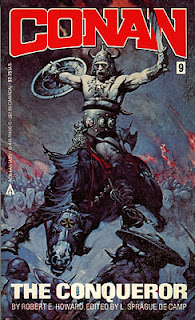 Howard didn't necessarily plan to write a Conan novel. Initially, he has submitted some short stories to a British book publisher. Denis Archer returned the stories because the British market wasn't at that time conducive to a collection of short stories, but if he had a novel... After reading that letter, Howard went to work on a manuscript. Archer went out of business before Howard could send it, and it was later printed serially in the pages of Weird Tales from December of 1935 to April 1936 as "The Hour of the Dragon". Published as a novel by Gnome Press in 1950 under the title Conan the Conqueror, it later became part of the Conan series of paperbacks edited by de Camp, starting with Lancer in 1967 through to Ace in the 1980s.

It wasn't until the Berkley Putnam edition of The Hour of the Dragon, shepherded by fantasy author Karl Edward Wagner in 1976, that Howard's version from Weird Tales saw print as a novel. This or the recent Wandering Star/Del Rey edition are the preferred texts, but I can't help but have a special spot in my heart for the Ace paperback. It became one of my favorite books growing up -- I'm fairly certain that I picked it up from among the shelves of books with similar Frazetta covers at the Waldenbooks on the second floor of the local (now demolished) mall. The paperback is comfortable and fun to read -- each page is jammed from header to footer with text but it never seems crowded. The font appears to be plain Times Roman, although a little more rounded and easy on the eyes. I've put books back on the shelf because of an uncomfortable text font. This paperback just seems like the perfect way to read pulp fiction.

A frequent criticism of Conqueror is that it's too derivative. It used the basic plot and some scenes from "The Scarlet Citadel" and ideas from "The Phoenix on the Sword", two early Conan tales. Certainly if an idea is successful once, Howard might use it again in his work. It also seems fair to think that Conan would have faced multiple challenges to his throne. Another criticism is that it's too episodic. While that may be a valid observation, I think it's one of the novel's strengths. This isn't a book full of meaningless dialogue and scenes where nothing of consequence occurs. Leave that for the multi-volume fantasy epics. This book moves. Things happen, and they're directly related to the plot. Al Harron recently discussed some of the plot elements of The Hour of the Dragon on his blog, specifically the motivations of the characters involved in the betrayal. Those were some points that I didn't really think about before.

Conan the Conqueror taught me several lessons about gaming, one of the first being about the episodic nature of events in a campaign game. I frequently try to plan and pace my games with a TV or movie feel, and thinking of each session as a TV episode can help. The scenes in Conqueror feel like different sessions of an RPG. Each separate scene could be fleshed out as a short story, but here they all tie together into the events of the novel. Another point is that the scenes are distinctive and the atmosphere is visceral. The Ace paperback was without illustrations, but they were unnecessary. From Howard's descriptions I can clearly visualize the back-alleys of Tarantia, the hills of Poitain, and the haunted catacombs of the vampire Akivasha under the pyramids of Stygia. The descriptions vividly brought these places to life for me. Finally, this was one of the first books outside of Dungeons & Dragons where I discovered vocabulary words like hauberk, cuirass, poignard, and burgonet. The only other work of popular culture that did more for my vocabulary was the Fantastic Four. 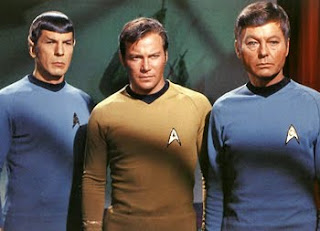 "Risk is our business! That's what the starship is all about!" -- Captain James T. Kirk
As someone who grew up in the late 70s and early 80s, I'm part of the Star Wars generation. I like Star Wars but I've always considered myself more of a Star Trek fan. As early as I can remember, my family and I would watch the syndicated reruns of the original series on TV.
Maybe it's because of my love of history, and Star Trek portrayed "future history". The crew of the Enterprise were real people, (mostly) from Earth, just like us. There was a chance that humanity would make it out of the 20th century and into a future of space travel, exploration, and contact with new life and new civilizations. Despite the dangers being faced, Star Trek shows us an optimistic vision of our possible future.

What Star Trek taught me, with respect to RPGs, was optimism in the face of danger and the value of cooperation. Those could be life lessons as well. It portrayed a future where competent professionals went about their business, doing what they do best, together as a team where each member had value as a person and skills that were valued. They were judged on their expertise and not who they were or what they looked like. The Medusan ambassador Kollos in "Is There in Truth No Beauty?" is from an alien species that is so mind-bendingly different in appearance that humans cannot look at them directly without going insane (a very Lovecraftian idea).

One of the best and most obvious instances of this philosophy occurred in the 3rd season episode "The Savage Curtain". After the alien "Abraham Lincoln" is beamed aboard the Enterprise there is this exchange between Lincoln and Lt. Uhura:

"What a charming Negress. Oh, forgive me, my dear. I know that in my time some used that term as a description of property."

"But why should I object to that term, sir? You see, in our century we've learned not to fear words."

Even though there are moments where it flared up again, at least in most of the Original Series prejudice is a thing of the past.

It is also worth mentioning that Star Trek was among the first dramatic TV series to have B-plots that directly impact the A-plot. S. John Ross referred to this in the Star Trek Original Series RPG Narrator's Guide and Ken Hite has mentioned it when discussing Star Trek in interviews. Will the crew discover the vaccine for the aging virus in time to re-start the engines before they spiral down into the planet's atmosphere? That's a great multiple-plot race-against-time trope of the sort you might see in an RPG scenario.

These are two pop culture influences on my gaming life that immediately came to mind. Others would include H.P. Lovecraft and the Cthulhu Mythos, giant monster movies, Star Wars and many more. What are your influences and how do they manifest themselves in your gaming today?
Posted by Lowell Francis at 11:44 AM