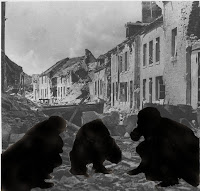 In a couple of weeks I’ll finally be starting my homebrew L5R campaign with a character and family campaign (you can see notes on this here). We have a party of five players; two of them have a number of obligations (family and otherwise). They often miss together. It occurred to me tonight that it might be useful to have a “failsafe game.” That way if we’re missing the pair we don’t have to skip or have these players miss important events or plot development. Tonight I had the three more regular players and we built the basics for the campaign.

I offered them three options, all of which involved the party as some form of law enforcement in an urban setting. A) A fantasy setting with the PCs as city guard dealing with rivalries and out of control adventurers. B) A modern game where the players serve as ‘police’ for the secret world of monsters and magic. CSI Diagon Alley. C) A steampunk game with magic and the weird out in the open. They settled on this last one and after some discussion we decided it would be an alternate history America, set in the late 1800’s.

I posted earlier on my idea of city-building using Microscope. It owes some inspiration to the Dresden Files City-Building mechanics I read recently. First we established a set of facts about the world in general. Then we did a series of rounds with players establishing:
As with Microscope these items are nested beneath one another. We did four rounds where the lead player established a theme, and then four rounds without a theme. After each rounds I had the player to the right of the lead player establish a group- a faction, conspiracy, or organization present in the city.

FACTS ABOUT THE WORLD


We had four rounds with themes: Bad Places, Getting Around, Secret Things, and The Law. At some point in the process we decided that the city, called Grey Reign, would be relatively in the location of Detroit. This would involve some slightly shifted real-world geography, but that would be easy. The city would sit on locks between two great lakes and have a canal system running through it.

THE NEIGHBORHOODS OF GREY REIGN
GARDEN OF TRANQUILITY
A lovely, lonely penal neighborhood filled with special trees and flowers. Soporific, they keep the worst criminals “pacified.” Guards on site have to be equipped with gas masks to protect them from the effect. Rumor has it that some guards have become prisoners after succumbing to the flowers and mixing with the prisoners.


GALLOWSHALL CORNERS
The governmental hub of the city of Grey Reign. This massive, maze-like building has expanded and now covers several city blocks. Covered walkways and connections have been used to absorb neighboring blocks and stores. It contains offers of government, order, and justice.


EMPIRE OF THE JADE TIGER
The colorfully named area which houses the city’s main rail station.


THE OVENS
A center of manufacturing and processing industry for the city.


HOLY HILL
The wealthy section of the city, named for a number of small but lavish shrines.


THE BRASS LOCKS
Ships locks used to pass between the two lakes and connect up with the canals of the city. The many warehouses for the city are here as well.


CENTRAL HUB
The city runs on canals which allow for traffic and travel through the city. The Hub is the huge network at the heart of this system. There are above ground waterways as well as tunnels and underground networks connected to this. One of the largest districts and crossroads of the city.


FACTIONS
Order of Theseus: Operators of the Magical Communications of the Maze-like Gallowshall. They’re voices from the squak boxes, no one has ever seen one.
The Constants aka Lich-Given: A dangerous group of magically gifted persons. They’re a secret conspiracy dedicated to controlling the city. They increase their power and sustain themselves by imbibing vitae distilled from the body of their fallen dark master, the legendary warlock-lich, Thomas Paine.
The Masked Lamplighters: Mysterious Guild who keep the city lit at night. They wear strange animal masks.
The Mockingbird Signers: A criminal organization of thieves, ruffians, and second-story men. Notable for their use of ghosts- controlling them or using bottled phantasms as weapons.
Vigilant Cartographers of Grey Reign Proper: They keep and publish maps and catalogs of civic badges. Theirs is a society of sleuths, explorers, artists, and some say, vigilantes. Misspelling the city’s name will get you beat up- a point of honor.
The Fist of Gallowshall: Enforcers of the law. The limits on their power is set by the Councilor and his cohorts in the Gallowshall.
The Artists: Tattoo artists who imbue their art with power. They may or may not reveal this to the client, and some of their gifts may be entirely random.
The Pragmatic Order of Forgiveness of Potential: Children of and former not-quite “Mad” scientists who gather together to support each other in ignoring the lure of their own shining genius.

THOUGHTS ON PLAY
It felt like it really went well- I enjoyed the process and everyone had a good time. We had three people who had played Microscope before (myself included) and one complete newbie. She had no problem getting into the swing of things and developing really cool ideas. The process went more smoothly than I could have hoped. We managed to do everything here in under two hours, and we could have easily done another round or two. It feels natural. I expect we’ll probably use some version of Fate (probably Kerberos Club) or World of Darkness for the game itself. Both offer ways to connect characters to place, so that will be useful.

I did notice that there’s less “interaction” between elements in this version of Microscope. I don’t think I’d realized how much of that there is normally until I played this. It really reveals some of the power and genius of the original game. Also we had a focus on the second level down- Persons/Places/Events, while we only had a few Rumors/History. I wonder if there’s a way to incentivize those elements. I’m not sure if you could do that with the interactivity question- unless you had perhaps more concrete themes (like people or places) from the Lens. On the other hand, it might be worth having one or two rounds where people have to put down Rumors/History. Alternately/additionally players might ask open questions about those people or places- story hooks they want to explore for later. “Who is the mysterious cloaked figure seen on nights of the full moon around McSweendon’s Pie Shoppe?”

I enjoyed it and it would be easy to come back to and expand. Nicely, while Vamps are out, I still have plenty of room to use Changelings and other classic types in the game. I’m really curious about trying to do this in or as a G+ hangout game. You could easily use Google docs to set it up. I wonder how well that would work.