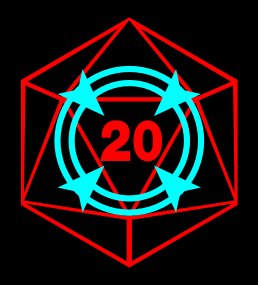 This episode we talk about technology and its use at the game table. We end up being a little more theoretical than practical. We're so embedded in the tech it can be hard to see its impact. The fact that we can have this conversation and others can listen to it is evidence of these changes. I have so many little things I take for granted at the table now- music, wikis, formatted handouts- I often forget how much work it took to equal that ten, twenty years ago.

I should note a couple of things about this episode. We record ahead of time, which means that things get past us. For example, I mention Storium in the episode. That started and  wrapped a successful Kickstarter after we recorded. I backed it, so perhaps we'll be able to talk about that later this year. We also mention Jacob Wood's "Accessible Games" in the podcast. We ended up interviewing him after this session, but we posted it earlier to coincide with his Kickstarter campaign.

21st CENTURY GAMING
Play on Target Episode Round Up

ROLL20
I mostly use G+ Hangouts and Roll20. I’m pretty happy with the G+ interface, or at least the version that’s up this week. It bugs me when they make interface changes which increase the difficulty. The constant shifts to the way you invite participants & audience confuse me. I like G+ for Changeling the Lost where I don’t really care about maps or on-screen information display. For that game I need to see the players. On the other hand for the M&M game we use Roll20, with Skype for the audio. We had some problems with Roll20’s built-in audio early on and shifted over. This group has used Skype for MMO playing for years, so they like it. That does mean that we don’t have cameras. That’s OK since screen space for maps is at a premium. All that being said, I enjoy the Roll20 tools, especially since I’m using only the most basic approach.

But others haven’t had as great an experience. Will Hutton has a solid post describing some of the problems he’s had: Five Ways Roll20 is a PITA. I kow some people have taken issue with his comments, but i think its worth looking at reactions across all levels: first impressions and veteran players. That points to think which can be done better- especially to reduce barriers to entry. I've rarely had technical issues myself- except for a couple of minor refresh problems- BUT I’m also using very minimal bells & whistles (and no native audio or G+ integration). Will Hutton’s point about handouts is a good one and echoes my experience. Running to the level I want using this tool requires more prep than f2f. As I’ve said before, part of the reason I run supers riffing on existing properties (Marvel, DC) is that I can usually find good illustrations to drag and drop onto the table. Hutton’s comment on set-up is right on the money for me- even though I’m not using character sheets, lighting, templates, or anything like that. Just using maps and tokens eats up more time than I usually like. But I’ve generally been happy with the results. Game in the Brain also has an assessment of using Roll20 for a year.

My new rules of thumb for assessing new tech tools:

1. It must be easy to prep- or have a hard part followed by coasting.
2. It must be easy to present at the table. It shouldn’t require fumbling around, get in the way of standard play, or eat up too much time.
3. It should offer a net new positive that couldn’t be created as easily with conventional tools. The time investment should balance with the benefit it offers at the table.

UNIVERSALITY?
A quick note- Josh makes an interesting point at the end of the episode, that game companies may hesitate from investing in particular apps or systems because they can’t be sure of what horse to bet on. I think that’s a fair concern. We’ve seen some Java-based approaches go the way of the dinosaur and Tabletop Forge die out in favor of Roll20. I wouldn't want to throw too much money at things. However I think there are basic and fairly universal resources which companies could put together: maps & tokens in jpeg or a similar format, fillable character sheets (not necessarily with drop downs), and a general template for presenting the game information on screen. For example, DramaSystem has some fairly wonky bits to it. A general template for presenting that info in a shared online environment would help. You could easily crowd-source that once you’ve set up a simple template. That’s less about App compatibility and more about showing players how they might best organize their on-screen information. As well, I can't imagine companies having in-house app developers, but there's a whole industry of people wanting to do or break into basic app development. I imagine companies themselves could reach out to services like Roll20, EpicTable, or Fantasy Grounds and suggest things.

I’M SURE RPGS WON’T BE RELEGATED TO THE INTERNET SLOW LANE
I wonder what the unintended consequences technology brings to the table, if any? We make the usual joke about regretting computers in the episode, but is there more beyond that? Long ago I expected that as easy and portable computers arrived we’d have more and more complex systems. The machine would handle the crunchy bits, just like a CRPG. But the problem lies in interface and input. Is it easier to do a roll, calculate on the fly, and look up the results on a table or to use an app and enter in the data for a Rolemaster attack? How much faster is one over the other?

I have an odd problem which comes out of the way I run my Mutants & Masterminds online campaign. Since we’re playing online, I want to use maps and tokens. Roll20 allows for that pretty well. However M&M doesn’t have the greatest map movement system- even the options in the Masterminds Manual are a kludge. But I want players to have some movement options and feel like they’re zipping along. So I ended up going with zone movement, ala Fate. The rank of your movement power determines how far you can move and still act. Everything is handled based on the players being within a zone. That means the situation's in relative scale to the map, rather than the powers themselves. So I’ve done a fight in a train station and one using a campus map cut up into zones. The only difference is that I impose greater range penalties for the larger-scale maps. It doesn’t make full sense, but it plays well.

However that approach actually means that most available battlemaps don’t work very well. Even Heroclix maps, which you would think would be great, end up a little small. Most tabletop rpgs constrain movement as a crunchy bit. Specialty characters get faster movement doled out as a feat or bonus. If you’re going to use those maps then you’re probably aiming for a tactical experience. You get something like the standard six-hex/yard move in GURPS. So many maps I find – even those I can buy- are often highly claustrophobic and tightly packed. They cover a room, an inn, a campsite, etc. I end up having to piece together and rescale many of them. That makes for some more work- something I hadn’t planned on.

Of course I couldn’t even have nice map pictures without the tech…truly first world gaming problems.

21st CENTURY GAMING
Play on Target Episode Round Up

If you like RPG Gaming podcasts, I hope you'll check it out. We take a focused approach- tackling a single topic each episode. You can subscribe to the show on iTunes or follow the podcast's page at www.playontarget.com.
Posted by Lowell Francis at 11:56 AM