The next portal for our OCI game will be Neo Shinobi Vendetta. I've been doing some pre-campaign planning for that before I turn to the mechanical tweaks we'll need for play. I pitched the game as Ninja Scroll meets Appleseed. Below are some of the details I've worked out so far. This setting is built on classic cyberpunk stereotypes and western-assimilated visions of Japanese cultural elements.

PREMISE: In Neo-Kyoto, Zaibatsu Clans battle for domination- served by tech-samurai, yogang yakuza, and deadly ninja. But the return of a shinobi family long-thought destroyed may shift the balance of power.

SCALE: Players take the role of trained ninja bearing strange powers. These come from a variety of sources: cybernetics, deep training, implants, nanowire, special hardware, viroware colonies and all kinds of weird future science. The setting will be science-fantasy, not hard sci-fi. The PC group will carry out missions while at the same time building towards their ultimate aim of destroying enemies who thought them defeated.

The characters will travel and act across Neo-Kyoto. While you might have a shared central base, your adventures will take you across the landscape of this enclosed metroplex. The background and places will be more thematic than specific.

CHARACTER BUILDING: PCs begin by choosing a template. This affects starting stunts, stats, skills, specialties, and refresh. They can then select X additional stunts/powers (depending on how I build this). The may also choose X and Y additional skills and specialties. They may trade refresh for additional stunts to start. Aspects will be handled in the usual exchange way.

THE SHINOBI THEMSELVES
There exist five orders of Shinobi- the history speak of bloodlines, factions and infighting that lead to this state. The five have warred upon one another since their inception. The settlement of the five great Zaibatsu, under the auspices of the Shogun, lead the Shinobi Orders to also align themselves. Each order tied itself to one of the Megacorporations. While they do not act as direct agents of that corporation, they undertake not to go against their interests. Instead, they act as 'for hire' operatives- and avoid striking their patrons.

The Shinobi train in many ways: physical challenges, virtual simulations, stimulus implants, and experimental engrams. This last one brings the carefully crafted advice, experience, and counsel of past ninja to minds of the newly indoctrinated. Somehow- by design or accident- a corrupt engram filtered through to a handful of new recruits. This revealed the truth. The Shinobi were not meant to be the tools of the Zaibatsu. Instead they had once had their own power, existing at the behest of the Celestial Emperor, the Mikado. They had their own agendas but also carried out the Will of Heaven. The shift of power which led to the organizational takeover of SHOGUN had splintered the Shinobi. But more importantly- they had been betrayed. The other ninja clan leaders had managed to subvert the meaning of Shinobi. At least three clan heads had conspired to ally themselves with the Zaibatsu- and had rewritten history in the minds of those ninja clans who did not agree.

This is a game about the revenge you’re going to take. 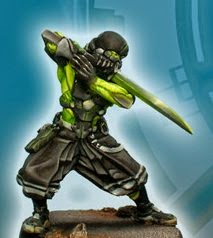 NEO-KYOTO
The Neo-Kyoto Metroplex stretches along the coast having swallowed dozens of cities and smaller settlements. It crosses all environmental zones from the icelands of the far north neighborhoods to the heat of the tropical south. Neo-Kyoto is the largest of the city-state metroplexes across the globe. Overland travel between them is rare- requiring venturing out into the wastelands and their dangers. The distance also makes air travel a dangerous option. Instead elites and transports use the space elevator, The Shin-no-Mihashira, to move via low orbit to similar facilities in those places.

The city is divided into prefectures and neighborhoods. Rapid transit systems for those with influence and cash make distances vanish. They see the city as connected and small. But the greater urban underclass or chonin know only their neighborhood and perhaps a few others in the same prefecture. Neo-Kyoto has few places with a singular character. Every prefecture has its shrine, school, theater, and so on of legendary repute. They blend together for the experienced urban dweller. They’re effectively generic. Great machines constantly move through, uprooting dwellers from neighborhoods and relocating them. The machines then renovate the area, sometimes repairing, sometimes tearing down, sometimes making strange changes to the usage. Teams of laborers live on those robots, servicing them The Workgogs operate at the behest of the Mikado, following his design instructions. Special sites like shrines remain untouched unless a punishment needs to be meted out. The restorers avoid neighborhoods with the Mikado’s blessing, often corporate key zones.

BUILDING NEIGHBORHOODS
To make things easy, we can define every neighborhood with four details. First, who controls the neighborhood or has primary influence? You’ll see a full list of the power players below, but the most common will be: one of the five Mega-Zaibatsu corporations, Imperial, Contested, Minor Clancorp, Templar, Anarchy, and most rare- Local.

Second, the primary use of the neighborhood,


Thirdly we assign a Quality or Niceness value to the neighborhood, representing wealth and investment. And then we assign some aspects to it.


KAMI
One force remains outside of the direct control of the authorities, the Kami and the Yokai. These emerged generations ago during one of the War of the Limitless Flowers. Many believe they represent old powers returned in modern form. The less spiritual focus on their actual forms. They see the Kami simply as free-roaming nanoswarms which take a solid presence from time to time. The soul of the Kami is simply an AI which has taken on a particular aspect drawn from classical sources. Whether this was an attempt to adapt, a rebirth of old forces, or a defensive technique used to limit them remains open for debate. The Kami have become objects of veneration and worship- depending on the neighborhood. Some kami exist as localized forces, while others seem to have greater power. Regardless, the kami remain as fickle and rarely seen powers. Their nature allows them to take many shapes and move from place to place silently. Temples and shrines to the kami can be found in every corner of Neo-Kyoto.

On the other hand, the Yokai have a definite form. They have also assumed a form and a role- echoing old creatures and monsters. They are not nanoswarms, but instead robots, androids, or other automatons which have taken on these personalities. If they have transformation capacities, they’ve shifted to appear like them. If not, they’ve jerry-rigged parts, mutilated themselves, or assume disguises. Picture a hauling bot welding plates to itself to look like a scaly beast. More dangerous are those Yokai with a human form and deadly approach. Some hunt the Yokai for bounties or revenge. Unlike the kami, the Yokai do seem to reproduce through some method. Exactly how they transmit their mimetic programming remains uncertain
.
NINJA POWER TYPES
The Shinobi have access to a number of special powers and abilities, drawn from various sources. Players pick a source for their powers. That gives some distinct advantages and limitations. They can then pick powers from the menu list. A few powers will only be available to some sources.

There’s a constant race of technology and incremental advancements within Neo-Kyoto. New devastating weapons appear and as quickly counter-measures are created. New forms of camouflage and jamming arise and the corporations devise cracks and disruptions just as quickly. This has been a game of cycles for generations.
Images from Corvus Belli's Infinity range

Posted by Lowell Francis at 1:37 PM