SUPER CAPSULE MINI-REVIEWS
I’d like to get through my backlog of smaller superhero support products. Good non-core supplements can get lost in battles over new editions and revisions. I’m always looking for books offering great superhero ideas and advice, regardless of system. For these micro-reviews I’ll note the relative balance of mechanical to non-mechanical material. I calculate character write-ups into the mechanical side of things. I’ll also note the number of these characters present, counting only those with full presentations in the game’s system. 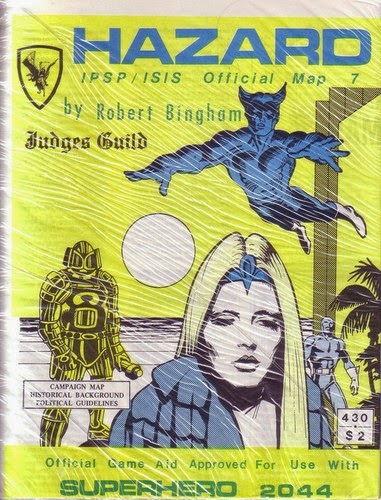 Hazard IPSP/ISIS Official Map 7 (1980, Superhero 2044)
Reading through Designers & Dragons' history of Judges Guild reminded me of this weird and unique product. Hazard (IPSP/ISIS Offical Map 7) may well be the first superhero rpg supplement. It’s definitely the first and last supplement for Superhero 2044. I bought it when it first came out years ago and lost it; Blue Tyson generously gifted me a new copy last year.

Hazard has several claims to strangeness: the source material, the topic, and the format. The game Hazard supports, Superhero 2044, gave gamers the first superhero rules. And weirdly, rather than presenting a modern game, it opted for a near future, sci-fi setting. Christian Lindke has an awesome history of that game which you can find here. I’ll keep linking to that article in hope that he’ll keep his promise and write more histories. S2044 presented a somewhat post-apocalyptic world- distinct and unusual. Instead of the US, players romp through the fictional island of Inguria, located just south of Japan and Korea. Hazard presents the larger Pacific Region, but oddly doesn’t provide a connection to Inguria or any real context.

Instead Hazard presets a quick and dirty overview of a changed pacific- focusing on Australia, New Zimbabwe, and a weird unexplained Novaterra. I’m still unsure if this last land mass comes from an alien invasion, broke off from California, or just exists in this setting. Hazard’s presented as a “tour guide” for subscribers to a fictional exploration organization. Through that it gives us a whirlwind tour covering the regions with a quick political overview, discussions of important cities, and a bizarre mix of factoids. There’s little in the way of headers for the main text, which makes figuring out the info even more difficult.

Some of the ideas here are interesting, suggesting “travel” adventures a hero team could engage in. You can pick out some hooks and suggestions for particular classes. There’s a half-begun section of ideas about how the tourist information organization itself could be presented in play. Australia in particular gets some call out attention. This focuses on the effects of radiation on the country- leaving the already deadly flora and fauna even more predatory. Kanagroos have evolved into a semi-sentient race now used as servants. I can’t quite tell if the material's a fond joke by a native Australian or more a weird bunch of stereotypes.

Ultimately Hazard’s undercut by the presentation, strange even for Judges Guild. It is a 22 x 24 quad-fold poster print. On one side you get the numbered hex map of the Pacific Zone- most of it consisting of the ocean. There’s little in the way of details or features- just a few cities marked out. Additionally the garish yellow and blue cover image eats up one of the eight panels there, blocking the middle of the map. On the reverse side is all of the text- in great long blocks running the full length of the page. The art’s mixed, with a couple of OK pieces and some really weak attempts. Two of the six panels there are taken up by unconnected illos and a catalog page for other products.


Bitter Pill: Fun for nostalgia, but not really useful as a modern gaming product.
Mechanics: 0%
Setting/Ideas: 100% (well, more like 40% if you remove the map and ads.)
Character Write Ups: 0 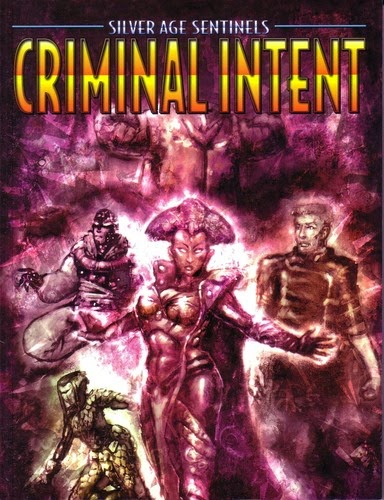 Criminal Intent (2003, Silver Age Sentinels)
I wanted to like Silver Age Sentinels more than I did. The Tri-Stat version looked kind of interesting, but wasn’t what I wanted in a point-buy game. The d20 version, on the other hand, felt tacked on. I’d already crossed that line with M&M so I wasn’t interested in another variation. Still the main SAS book had some intriguing world-building ideas- perhaps some of the sourcebooks would be useful? I received Criminal Intent in a trade (I think) and only just got around to going through it. It offers generally useful materials for GMs of any supers game- a consideration of villains without just being a monstrous manual of them.

The 128-page book’s broken into five major chapters. Chapter One “Anatomy of a Villain” covers the basic outlines of building a villain: considering motive, justification, opposition, and so on. It talks about assessing the “level” and scope of a villain's schemes as well as the campaign context. I like this chapter, which takes up a third of the book and offers some new ways to consider building your foes. Chapter Two on the other hand is pretty short- covering lone villains. Those are often the high-powered masterminds, but CI considers other reasons why such characters might exist. There’s good discussion of the implications of being a loner on the villain's behavior and ability to operate in the criminal underworld.

Chapter Three, as you’d expect covers supervillain teams. It offers a good breakdown of typical team patterns- though perhaps that could have been rounded out with more discussion of variations. The idea of team roles and tactics can be useful. I’ve often found myself simply throwing together groups because I like the individual concepts. The material here offers some new approaches. While it might be obvious for some veteran GMs, I like being reminded of these concepts in a clear way. The brief Chapter 4 follows that up with material on organizations (ala VIPER and HYDRA) and how they might operate. A distinct book on those would have been too much, but I’d still like to have seen more here. The last chapter offers a dozen villains, some hench-types, and a few plot hooks.

The book itself is nicely put together. I’m not as fond of the weirdly fuzzy cover image, but the interior artwork’s decent, consistent, and very ‘90’s in places. There’s a good mix of male and female images, with some refreshingly cheesecake male costumes. The layout’s decent and readable, with the body font being maybe a little light on the page. But headings and sub-heading break the text up well, there’s cool art for chapter breaks, and it shockingly offers an index. Crazy!

Bitter Pill: This is pretty good- and makes me want to track down more of the SAS support materials. It isn’t as generally useful for putting together adventures for the table, but it presents good food for thought. I can imagine rereading this before planning a new campaign. While I don’t think you can find this book in pdf format (due to GOO’s legal problems), cheap copies can be found on Amazon and elsewhere (though they oddly show a different cover image).
Mechanics: 15%
Setting/Ideas: 85%
Character Write Ups: 14 (4 female, 2 generic) 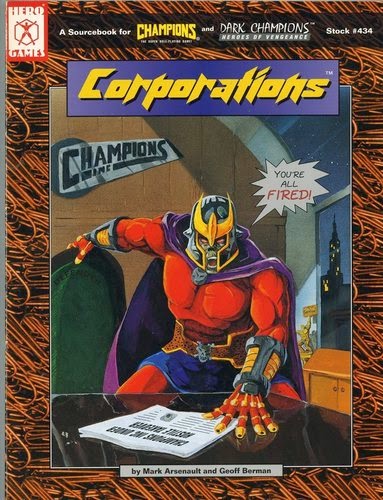 Corporations (1994, Champions)
Putting together my history of supers rpgs reminded me of a several oddball sourcebooks I meant to pick up. I’d forgotten about Corporations, written during the later part of Champions 4e’s reign, when Hero Games still had their distribution agreement with ICE. Authors Mark Arsenault (San Angelo, Sengoku) and Geoff Berman (Adventurer’s Club) put together what’s clearly a labor of love- and long-time study. Every once in a while you see sourcebooks like there- clearly crafted by someone who really loves the subject matter, perhaps even more than the game itself (GURPS Russia’s another one). Corporations does what the title suggests- it considers corporations in superhero games. That’s a staple of the genre- OsCorp, LexCorp, Halo Corporation, Kord Industries. That’s a great idea but is it useful for general superhero campaigns?

Corporations splits into two halves. The first presents sample companies and the second deals with what companies actually do in a campaign world and how to present them. The book has 26 corporation write-ups, each about 1-2 pages. They run the gamut tech, criminal, financial, etc. Some are marked out as existing in the Champions continuity. Each has a few stats, history/background, campaign use, slogan, alternate use, and scenario hook. These aren’t bad but could be better/more useful. A page with a reference sheet detailing these companies and areas of interest would be helpful. That would make looking up in play much easier (“What company deals in experimental petrochemicals?”). I really appreciate the book offering another take on each company’s use rather than presenting a monolithic entity. That opens up the ideas for GMs. But I wish the background stories were tighter in many places. There’s detail there, but only a portion of it would actually hit the table. I’d like more scenario hooks- written even shorter- and perhaps a couple of quick NPCs.

The second half of the book shows off the authors’ research- which is both good and bad. There’s a ton of nitty-gritty details on how companies and corporations actually operate (bond issues, organizational structures, regulatory functions). I’d like more of this tightened- or at the very least more examples of how this information might be brought into play. I especially dig the discussion of different ways to use corps in a campaign (patrons, adversaries, allies, etc). Some of that’s a little obvious, but it works as an idea generator. That could have been expanded, ala Villainy Amok. Throw out more hooks for each of those modes and perhaps even connect them directly to the example companies already given.

The art work and presentation holds the book back. The layout uses the typical dense text of the period and 4e Hero Games books in particular. There’s a ton of information, and much of it could use sub-headings to help break things up. There’s not as much art as usual for these books which compounds the problem. A few pieces are quite good, but others feel dashed off to fill in. A couple of the larger ones repeat. The cover’s particularly bad- with an oddly painted Storn Cook image, a weird orange border made of paper clips, and a prescient catch phrase “You’re All Fired.” Don’t buy this for the looks.

Bitter Pill: I like, but don’t love this book. I think it could be most useful as a resource for quickly coming up with companies for future plots. Or if a GM planned to make companies and corporations a cornerstone of their campaign. Not available as a pdf, but I found a cheap copy on Amazon.
Mechanics: 5%
Setting/Ideas: 95%
Character Write Ups: 5 (All Male)
Posted by Lowell Francis at 4:29 PM