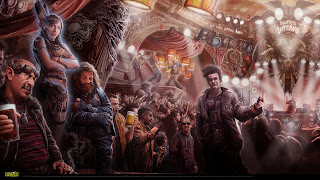 It has been cool to see GMs discuss different approaches to conveying setting to players. I added a large comment to Tuesday’s post, but I wanted to pull that out and add a couple more thoughts. This is an important GM question: how to they get a setting across, when & why is that important, what do you gain/lose by doing it one way?

Aside: One commenter suggested I’d left out “"Let the players find out through play." I think that’s what I meant by the “Puzzle Piece” approach, but I could have been clearer about that.

MY PROCESS
In putting together this list, I tried to be relatively neutral. My approach has shifted over the years. I used to be heavy into writing up backgrounds, timelines, and pantheons. I sunk hours into gazetteers for different campaigns. I changed because I began to minimize my prep. Actually, I shifted more because Sherri pointed out the time I spent on things which didn’t hit the table directly. I didn’t need to fully flesh those things. A lesson I've learned over and over: “Don’t paint what you can’t see.”

Let me snapshot the last five years of running and what I’ve given to the players as the “text” of the game. I’ll leave aside what’s done actually at the table, except to say that if players suggest things I make an effort to integrate those. My players know that if they want to go in a new direction, I’m going to assist them in that.

In the last five or so years, I’ve run twelve campaigns. By that I mean games lasting 10+ sessions. A couple of other campaigns overlap into this period, but the bulk of their sessions fall outside 2010 to now.

Of those, we created seven campaigns by via collaboration. In most cases that meant using Microscope to create the setting. We did single development sessions, usually with I a seed or a starting point (hunts, refugees). For two of those, we built a city rather than a timeline. I then went through what we created, organized it, filled in a few missing gaps and then presented that to the players. In one case, I supplemented that with an additional info document (23 Things About Abashan). I used that document both as my campaign prep and player-aid prep. I tried not to do much more campaign building on my side beyond that. (Also in that case we've used a wiki where players can add items to in exchange for exp).
For the two non-Microscope collaborations, I used other structures. In our Legend of the Five Rings campaign, I wrote up a two-paragraph synopsis of events since the last campaign. The group then worked together to create a new family for one of the clans, which they would then play. I built that mostly on John Wick’s Blood & Honor mechanics. The only other handout was the rules.

For our Superhero campaign, I asked everyone to pick an existing comics character to do a “Year One” version of. I used those choices to create the world. I wrote up several different teaser one-sheets- a couple on the history of supers and the rest covering known NPCs (heroes, villains, officials). That ended up a little heavier- perhaps 10-12 pages of material. OOH I also used that as my GM prep and didn’t do much campaign prep work beyond that.

I built four other campaigns myself. For three of them- Star Wars, Scion, Changeling the Lost- I did nothing in the way of handouts. Most info I conveyed in character creation verbally or through the CC choices. For Star Wars I simply defined the canon (original trilogy). In one case I overdid it. For my wuxia campaign I wrote up a ton of material and dumped that on the players- over time, but still too much. I like what I wrote, but the game ended early because of scheduling conflicts—so that was work lost. As well, having that material meant that the world itself was more convoluted than it could have been.

The last campaign is my multi-genre OCI game. So far we’ve played through four distinct worlds for about 6-8 sessions each. In one of those we used Microscope as the basis. For three of those settings, I tried to restrict myself to a brief pitch, insight through character creation options, and a document with “23 Things” about the setting. Again, I used those documents as my own GM planning time, so they weren’t just for the players. (City of Ocean, Neo Shinobi Vendetta, Masks of the Empire). I like this approach because I do some brainstorming, keep most of the entries tight, and can seed weird stuff for later. The lists also don’t seem to overwhelm the players.

There I'm creating more player material, but I hope I'm not wasting effort/energy since that's also nearly all my campaign prep for these games (beside system tweaking). I have a goal now: when doing campaign planning, I try not to write for my own use. Beyond the set up I restrict my additional pre-campaign prep to short lists (locations, people, things) and some sketches about possible incidents & events. In a perfect world everything else would be for me and the players and wouldn’t be overwhelming.

CHARACTER CREATION
Another approach I missed in my list is setting information conveyed through the Character Creation process (thanks to everyone who caught this). Games can use the player’s CC choices to show what exists in the world- different races, distinct classes, nature of powers like magic. Clever designers can work in additional factoids and details. This approach can illustrate setting tone: more social options might describe a more complex world, heavy combat abilities suggest more physical conflict. One commenter pointed out that equipment lists can even give a feeling of the setting. Traveler’s restrained projectile weapons say something about that universe vs. the more out-there lists from Star Wars or Gamma World.

WoD is pretty good for combining setting and character building. The Clans have short, evocative images and descriptions. Vampire the Masquerade’s set up expands and develops the simple pitch of playing modern vampires. Some editions of Legend of the Five Rings do a great job of distilling the background down to the character choices. The combination of colors and restricted choices make it clear who the different clans are in the world-and the tension between them. Many games with complex backgrounds use an “archetype” presentation to explain the essential choices. Playbooks may be the endpoint of that.

Weapons of the Gods' Loresheets offer another device I’d forgotten about until someone mentioned it. Loresheets cover details of the setting: groups, myths, key NPCs, nationalities, philosophies. Players can “buy into” these stories at the start. This connects them to the setting and invests them in it. It’s cool how that monetizes the setting. However, at least in the case of WotG, there’s a ton of text to get through. If players want to make informed choices, they have to plow through a lot of stuff. There’s a similar problem in L5R’s ancestor mechanics.

13th Age's Icons mechanics also fall into this category. The game reduces key factions to a set of key figures. Players then establish their relations to them at the start. The pitch for each can be done quickly and it invests the players in knowing more. 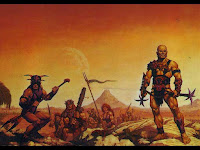 PUBLISHED SETTINGS
I lumped together homebrew and published settings in my list. But they have distinct differences- a set canon, great amount of material, player access, and so on. But the main useful point is that someone has to be able to grok the setting and then they have to figure out the best way to get others to grok something about it.

Game books have three different audiences. One, players who might play in the setting. Two, GMs thinking about seriously running it. Three, NPRs or "Non-Player Readers" who know they won't actually get this to the table but are reading the books for entertainment and inspiration over play. I think each of those audiences has a distinct set of needs. Some designers consider that- and I’d point to Legend of the Five Rings and early Shadowrun as great examples of that: a wealth of material, condensed player summaries for archetypes, and colorful visual design to grab attention.

On the other hand some settings I love as an “NPR” because I don’t know how to even start to get that across to the players or even get a handle on for myself. Iron Kingdoms falls into that category for me, as does Mindjammer and Weapons of the Gods.

And bottom line: some games exist where the players won’t get the full immersion and experience unless they actually do some reading and exploring. On the sci-fi side Hans Messersmith suggest Eclipse Phase falls into this category. The related Transhuman Space as well. For fantasy, Dark Sun and Houses of the Blooded have many distinct conventions and details. GMs need to recognize that and figure out the most condensed “homework” for their players. And designers need to figure out how to best assist them.

Suggestions? Additions? What Do the Different Approaches Bring to Your Table?

Selling the Setting (or God...Please...No More Backstory...)
Posted by Lowell Francis at 11:47 AM