Origins Stories: Running, Playing, and Eating at the Con (Not Necessarily in that Order) 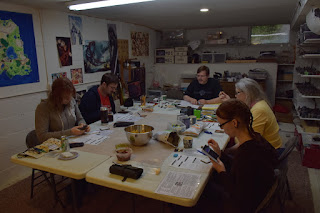 My Origins started several weeks before the actual show. We were lucky enough to host the EuroGeek RPGGeek contingent as they toured the “lovely” Midwest. Sherri and I took advantage of this impetus to do a major clean up and reorder of the house: we cleared the previously messy back basement, rear porch, and sun room; I patched, sanded, and repainted sections of the woodwork; I stripped and re-caulked the tub; and I cleaned and refinished the floors downstairs. We looked at our various linens and towels only to realize the most were eight years old and some we'd actually brought into the marriage in the '90's. So we finally bought new ones...soft, comfy new ones. Finally we loaded up the house with miscellaneous food treats, working to accommodate the various requirements. We made vegetarian chili, three salsas, and three kinds of cookie dough. We also laid in a great deal of beer- which ultimately led to my tire blowing on the highway (a story for another time).

Long story shorter: IT WAS AWESOME. THEY WERE AWESOME. I HAD AN AWESOME TIME.

You can read Jules' write-up of the events here: an overview, the boardgames we played, and the session of Guards of Abashan I ran for them.

They arrived late on Saturday and on Wednesday we took off for Origins. Bad planning on our part meant Sherri couldn’t go with us. And as amazing as Origins 2015 was, it would have been mega-awesome with her there as well.

Note: I didn't take pictures, so I pilfered everyone else's.

Since this is my 992nd post I’m filling these entries with countdowns as we head to 1000, therefore.... 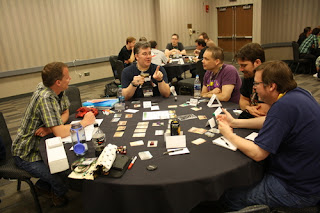 1. I had a really solid time at Games on Demand Gen Con 2014. In fact, I’m pretty sure I said it was the best con experience I’d ever had. Origins topped that. Some awesome came from having a larger pool of friends and people I knew around. More came from my being less tense and more willing to play in interesting games. At this GoD I tried an Aliens hack of Torchbearer, Hope Inhumanity, and Wrath of the Autarch (which I’ll come back to). I got to play with some amazing people, including Dana Fried and Kira Magrann, both of whom I knew from my G+ feed.

2. Both my sessions of Action Cards went off. I had great players in both sessions, including Steven DesJardins, who’d played Guards of Abashan twice online and got to run his rogue again. Pamela Alexander and John Alexander played in both sessions. They owned the table and gave me great feedback on elements of the system. I also got to run f2f for Rich Rogers- something I was immensely nervous about. I loved running these sessions and learned a lot.I've been running a long time, so I'm always happy when I pick up new approaches and concepts.

3. The dealers hall was the weakest part of the show. I picked up paper versions of a couple of rpgs I wanted (Monster of the Week 2e and World Wide Wrestling). I also finally broke down and bought Agents of SMERSH, a board game Id wanted for some time. It had been OOP whenever I'd hunted for it, so took the plunge. Most other things I had on my list just weren’t there: ding & dent board games; older Ars Magica stuff; mats for Wings of Glory; Mutant Year Zero; and the Stone Age expansion (sold out).

4. The food’s amazing at Origins: varied, reasonable, and easy to get. Unlike Gen Con each meal isn’t a trial. The North Market continues to amaze with excellent curry and decent BBQ. The “Slow Foods” place served me the weakest meal (which I can only describe as a salt burger with salt). I’ll skip that in favor of something else next time. I also went to a Mongolian BBQ place twice- which managed to sate everyone’s food proclivities. While there I fanboy’d at Tom Vassal while he waited for the rest of his party to return to the table. The only bad food moment came in discovering that Barley's no longer carried Blenheim Ginger Ale.

5. Both of my hotel roommates were Pathfinder dudes. I heard a lot about Pathfinder that weekend and I made sure to check how their events went. Notably neither of them ever asked about my games or what I played.

6. I got the chance to talk to Phil Lewis several times. He told us about his project, Wrath of the Autarch. I’d seen the cover image from that pop up in my feed several times. To paraphrase his description it's a card-driven, kingdom management, troupe-style game, powered by Fate. That pretty much ticks off everything on my personal list. I got the chance to see some of it in action Thursday evening and I dug it. It has amazing ideas and mechanics running through it. And I’m not just saying that to be polite and because he gave me a print out of the rules. I run a seasonal, family-level Legend of the Five Rings campaign using Action Cards. I’d struggled with a handling development, resources, and trade. I came up with some quick fixes, but WotA has a set of smart approaches that I’m going to steal adapt. I also love the way the game establishes problems through the Deck of Fate elements. Sherri and I spent an hour going through the book the evening I got back from Origins. I’ll be backing this project the moment it pops up on a Crowdfunding site.

7. For years I’ve heard that Lady Blackbird’s amazing. The hype made it sound up my alley, but for some reason I’d hadn’t given it more than a cursory glance. We played it on Friday. It kicked ass. That’s all I have to say.

....Well, I have a little more to say. Getting to hang out a bunch with Rich Rogers was a highlight of the convention. He’s sharp online and just as sharp in person, as well as funny and generous. He’s a dynamite off-the-cuff GM and I picked up many things from watching him. He uses his physical space really, really well and fully engages with his characters. Plus he threw around several pop culture references that I got while others did not, so that’s ego-boosting. His rare rants were artisanal and perfect. Rich played a ton of games and also ran Goblintown and Ghost Lines in addition to Lady Blackbird. I've been thinking about the latter game ever since he evoked the setting at the table. Rich is a cool dude and I can see why Dr. Tom the Frog hired him. 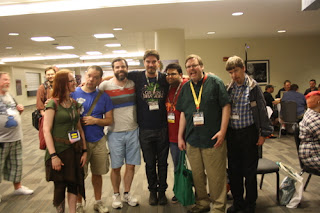 8. As well I got to play Microscope and a short game of Dread, both of which I dug. I met many amazing gamers; I’m probably going to overlook many of them- Matt Downey, Rishi Agrawal, Nicholas Hopkins, Justin Rogers, Jonna, Jan, Jules, Jonna’s friend Alex, Mick Bradley, and on & on. You can see me screaming for some reason in the picture. I saw other amazing people I knew from G+, but I'm terrible at introducing myself to strangers...

9. Based on comments from Origins (and some pre-Origins requests), I’ll be getting together a Beta-version of Action Cards in the next few weeks, hopefully by mid-July. That will include basic system mechanics, character creation, and general guidelines aimed at players familiar with Fate. I’ll likely post that on DriveThru, including the various deck set-ups I’ve put together. I have a GM deck, Consequence cards, standard play sets (with player-fillable cards), and draft sets for a couple of genres.
Posted by Lowell Francis at 4:07 PM