Road to the Slaughter Bowl 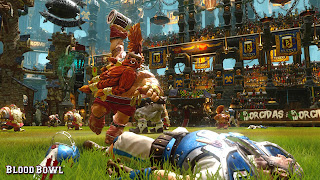 Below you can my initial Threeforged rpg, a roughly sketched thing that died early. In it players take the role of an underdog high fantasy football team going on the road, dealing with new & hostile places, and duking it out on the field.

Of those two were in my top thirteen, but none in the final seven I voted for. One I skipped reading, and the other two I thought were decent, but not great. It's weird to see how different your taste and judgement are from other people. I'm hoping once everything's done we'll see the stats on the voting. I'd like a sense of the numbers and distribution.

As I mentioned before, my Stage One entry never got finished. I'm not sure if that happened in Stage Two or Three. I'm guessing the former, since the larger number dropped there. Is it good? No, not really. I has potential I think, and we only saw one or two Threeforged entries covering road trips and performances. We had an open mandate for Stage One (beyond the word limit). I wanted to give the next designer a clear premise, the general shape of play (on road, in town, on the field), and a novel mechanic for resolving the matches.

In retrospect, I wish I'd done from visual examples of play. The mechanics might have thrown someone off. I'd wrongly assumed given the simple formatting restrictions that we weren't to use illustrations or advanced formatting. (I feel bad about that since I ended up doing a disservice to my S2 & S3 entries). On the other hand, the fact that I threw in a mechanically dense, probably more trad, sub-system could also have been off-putting. But let me leave the hand-wringing aside. I think there's an interesting idea here and something I'll probably come back to. The key will lie in how interesting, fun, and fast I can make that "Game Day" mini-game. It has to occupy a significant place, allow all players to contribute, offer choice, and be affected by earlier events. So that's a tall order.

PREMISE
A team of high fantasy underdogs hits the road to make their mark in Slaughterbowl. They face dangers on route, at their destinations, and on the field. Monsters, discrimination, powerful gamblers, cheating mages, ready indulgences, and outlaw opponents.

TEAM
Players first decide on the kind of team they want: rivals to a premier team from their nation; an unexpected race (Halflings); a good team fallen on hard times; a patchwork crew from all over; trying to raise money to save their village? This should show the tone and style of game they want.

Each picks talents, reflecting their role on the team. These are abstract. Some reflect off-field play (like Talent Scout, Eye for the Opposition, Good with Fans). On-field abilities directly tie into The Big Game. (recovering from an injury, gaining a team morale when they’re scored on, etc). 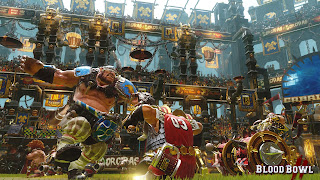 PLAY
The game has several “play areas.” Travel: adventures on the road, survival, monsters, finding their way, random encounters. In Town: lodging, dealing with locals, sizing up the enemy, celebrating, finding practice space, dealing with fans, establishing reputation. The Big Game: a push your luck subsystem to resolve the event and dole out accolades & injuries.

OFF THE FIELD
Standard action tests. The GM sets a difficulty for the action and the stat to be used. Players roll dice equal to their stat and try to beat it. If they succeed, they gain something. If they fail, they take a condition.

ON FIELD
Game Day has it’s own subsystem- combining skill rolls and choices. There’s an element of push your luck. This offers a showdown, with different game flow. You need d6s of several different colors and some arranging system. I suggest a Boggle tray (they have 4x, 5x, and 6x, sizes). Look in second hand stores. Alternately use leftover board game sprue.

The GM puts together the opposing team’s challenge: d6’s in several Offense (Black), Defense (White), Opportunity (Yellow), Fight (Red). They roll and arrange those in the grid. These represent the opposing team’s strengths players have to deal with. Players get a minute to examine this and discuss (longer as they gain in experience). Then the countdown begins and players cannot communicate by speaking, drawing, or writing. They’re on the field and can only communicate via gestures

In turn, each player takes an action. They may influence any die with an open side. They can:


Actions require a skill test. Players can roll any stat for these. They must match or beat the value of the dice they’re affecting. If they fail, the opposing team can either a) make an immediate attempt to score, b) add +1 to their next attempt to score, or c) Inflict an injury. An injury affects the stat used and means the player may not roll on it for the rest of the half. The opposing team also gets a chance to take an action after all PCs have gone. At this time they may do one or both of the following (in any order):
…try to Score or try to Injure
…and swap the color of any non-green die to another (roll the die); in this case they must also swap a second non-green die in for a green die (roll the die).

To attempt to score, the player must have at least one opportunity die. They roll a number of dice equal to one of their Offense stats. They may also roll & spend any additional opportunity dice they have. If this number rolled beats the total showing on the remaining White Defense dice, they score a point. If it doubles that, they score two. After any scoring attempt, failure or success, the GM rerolls all Defense dice. If the scoring attempt succeeded, the GM may add either a White or Red die to the board in an open slot of their choice.

When the GM attempts to score, it will be against the person who failed roll or a player of the PC’s choice (between turns). That player rolls dice equal to one of their Defense stats plus any opportunity dice they wish. If the value of the Black dice showing on the board beats that, the GM scores. If it doubles that, the GM scores 2 points.

Attempts to injure work like scoring, but compare Red dice to the player’s roll. If the GM succeeds, the player has to take an injury on one of his play stats.

Players may always spend team morale to add a die or reroll one. Every time the team’s morale hits zero, a player takes a Mental condition.

Once all Opportunity dice have been spent, the game hits halftime. Reset the dice and play again
.
ON THE ROAD STUFF
Gaining bennies, facing challenges

THE TEAM’S CREW
NPCs with special abilities, can gain or improve their crew: coach, medic, agent, roadie, etc. Each should have a set of Indulgences with ratings as well.

RECOVERY
Players take injuries or conditions in the course of playing: mental and physical. Actual harm, well that they can easily take and have seen to by the team physiker. The other stuff’s harder. Curing that requires a Screw Up or Helping Someone Out. A screw up means they play out a scene just buying into one of their indulgences and raising the value associated with it. On the other hand, they can try to fix themselves or one of the NPCs. This should require rp and tests, but should either reduce the PCs indulgence # or make the NPC better.

GROWTH
Play skills can be improved. Possibly a mechanic for feats outside of play.
Fame
Money


I'm not married to the dice version. I have to think about this further: maybe cards?
Posted by Lowell Francis at 11:14 AM