Here's the final part of my rundown of my Top 100 RPGs. As before, these aren't necessarily the 100 Best RPGs, but they're ones I want to play. We'll see if that changes in a year. Games marked with (*) mean I want to play the setting/premise, but I don't want to play with the existing rules. In some cases, there aren't any rules right now: I just want someone to write up a cool game based on that. I'll comment on more items than on previous lists, since this is the top 25.

25. Tianxia
24. Mutant: Year Zero
23. Wuxia Hack*
As I've posted before, I want a game that simulates the soap opera feeling of the Wuxia TV shows and movies while offering room for interesting action. I need to go back and work on my PbtA hack some more. Hans Messersmith suggested a dynamite way to handle playbooks. Characters chose from personality archetypes: Student, Loyal Servant, Teacher, Outsider, Rebel, and maybe Retired/Isolate. While in that playbook/role they gain some benefits and can gain an advancement. When an event occurs which shakes the character's identity, they can move to another playbook. The precise shift (like from Loyal Student to Rebel) would have a name and gain them a distinct benefit. That's the rough outline.

22. Lucha Libre Hero*
21. Fading Suns*
20. MERP/One Ring Tolkein*
I've been running fairly continuously for our Sunday group since the mid-1990's. We started with Rolemaster and have been through six campaigns in just under twenty years. Right now we're nearly at a climax for L5R. Several times we've floated Middle Earth as an new campaign option, but it's always been slightly outvoted. That's much to the chagrin of Alan, who loves the setting.

And his extreme Tolkien knowledge actually makes running a ME campaign a little daunting. I I'll have to really brush up on the material. I'm torn about actual time setting. On the one hand I dig the classic Middle-Earth Roleplaying '1641' period, just after the Kin-Strife. Arthedain still stands, and there's slightly more room to explore if I want the players to tour the realm. On the other hand, the recent One Ring material offers a compelling (and easier) approach set closer to the time of the novels. I'm unsure. 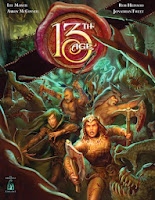 19. 13th Age
18. Legend of the Five Rings*
17. DramaSystem*
I've spoken before about DramaSystem and Sherri's offered a counter-point. After some play and some rereading, I know the whole it doesn't work for me. I love the character creation mechanics and how it builds the relationship map. I think the Series Pitches offer an amazing way to distill and present a campaign concept. In recent years when I've been campaign building, I've reviewed these structures (and those of Kingdom). And some of the series pitches are amazing and adaptable (I reworked Heroes of the City for example). I'm a little more ambivalent now on how scenes work. I like the transactions and the way the game measures social power. Sherri likes that less, and the loaded nature of every scene bothers her. Rich Rogers made a good point to me about the way the scenes disrupt flow, forcing a step away to assess victory before moving forward.

And the procedural side? That I don't like at all. I've looked at some of the streamlined options given, but they still seem to be stuck on a needing some crunch and fiddliness. I know the game splits the two sides apart for a reason, but I'm not sure I want that. I think we either need something heavily handwavy for "action" scenes or else something which more organically connects to the drama side. I think maybe Aspects and Fate contests might work for that. Right now I'm still figuring that out. (Examples: Malign Universal; A War on Christmas, Mutant City: HCIU; Heroes of the City; Rust)

16. Mage: Sorcerers Crusade
15. Scion*
14. Rippers*
I'm not sure why I dig this concept so much. Maybe it's the Victoriana trappings, maybe it's the weird fantasy corruption. Maybe it's just that you can cut limbs off a monster and bolt them to your hunter. I think you could do a fascinating reskin with Monster of the Week. Whatever system I'd use, I'd want to develop an approach offering more interesting social and building aspects. The Kickstarter for a 2nd edition's out now, but the price point's a little higher than I like. I suspect there's enough background material in the original to make it work.

11. Hot War
A lot of investigation games on these lists....huh. Am I stuck in a rut? I've encountered several players who say they don't like mysteries and investigations. I need to think about that. Anyway, Hot War's newest game in my top 25, I only found out about it a couple of months ago. It's a little dark, which means I probably won't be able to run it with my f2f group unless I reconfigure. I have a one horror and grime-hating player in most of those games. It might be something to try online, but I've found investigations and mysteries even harder to run in that context. 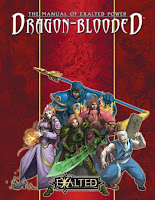 10. Feng Shui*
9. Exalted*
I like the idea of Exalted but hate two things: the system and the Exalts. Well, not all the Exalts. Weirdly, I like the Dragon Blooded. They're ostensibly among the villains in the setting. And they've got a crazy, autocratic, infighting-based society. But they also make sense to me. They're trying to maintain stability and order. They have ambitions and passions which make sense. They're closer to mortals than any of the other Exalts. Most importantly, in order to survive and succeed they need to work together. That's huge- everyone else besides the Sidereals seem too dude-bro for my taste.

8. Changeling the Lost*
7. Base Raiders*
I love this concept: not just for the idea of dungeon-delving into abandoned villain bases, but for the broader world. There's a culture that's grown up around this raiding, characters have very distinct reasons for going in, everyone has a meaningful background. We get a world with a superheroic past, but room for characters to make a mark. Add to that resource and building systems and you have a game I seriously dig. The actual mechanics of Strange Fate, eh not so much. They're OK, but not precisely what I want. I've thought about other systems to run this with. I like Worlds in Peril, but the abstract level it operates on might not blend with this. At the very least I'd have to retool the origins and goal playbooks. There's also my go-to supers game, Mutants & Masterminds. They have conversion rules for it. But I wonder if M&M might even be too crunchy.

6. Microscope
5. Kingdom
I keep meaning to write a review of this game. I can't quite put into words what I love about it. I've always been a fan of realm management. Kingdom distills that down to the essence: a group facing crises. I love the way it presents the set up, and how it forces the players to agree and disagree. Everyone wants the kingdom to survive, but each player has a different sense of what that means. The mechanics and roles take some getting used to, realizing that doing some things may require a sacrifice and a shift in position. The rules can feel wonky to new players, and usually a first session will only face one "Crossroads." I'd really like to play this where we plan on having more than one session.

4. Fate Core (Burn Shift; Wild Blue; Eagle Eyes; Romance in the Air; Venture City Stories)
3. Mutants & Masterminds
2. Fate Accelerated
I like Fate a great deal, I have a good time running it so I'm always a little sad when I see folks writing about how they hate it or it's broken or whatnot. Sometimes they describe the game they've played and I think "Man, that's not my Fate." That's not a case of needing an excellent GM to make the game work, but needing to not have a crappy GM. For others, Fate doesn't offer what they want out of the game or it doesn't handle things in a way that makes sense to them. I can dig that.  Me, I like a Fate game that moves the mechanics to the back. Say what you're doing and I'll tell you what you need to roll. We don't have to slow down to tag everything on cards or whatnot; we can catch things on the fly.

I didn't dig Fate Accelerated at first, but now I've come to appreciate the simplicity of the Approaches. Some don't like how it structures Stunts, but that can be easily modified, just build new ones. Look at Fate Core for example. If something seems too potent break it up into parts or have it cost more stunts. Anyway, I enjoy Fate, but many of those I play with don't; so I'll reserve it for special groups and one-shots.

1. Action Cards
If you've read my blog, you'll know Action Cards is the homebrew we've been playing for a decade and a half. For most of the games I've marked with an "*," I'd use AC if we're playing f2f. Online it's a little harder, but I'll figure that out eventually.  It's a little bit of a cheat, but so what.