Here's the third part of my rundown of my Top 100 RPGs. As before, these aren't necessarily the 100 Best RPGs, but they're ones I want to play. We'll see if that changes in a year. Games marked with (*) mean I want to play the setting/premise, but I don't want to play with the existing rules. In some cases, there aren't any rules right now: I just want someone to write up a cool game based on that.

50. Glorantha*
49. Ashen Stars*
48. Cthulhu Invictus/AD 43*
47. Road to Slaughterbowl/Bad Bard’s Tale
My #threeforged entry didn't make it through the third stage, but I still love it. I want to figure out how to put that together and make the playing of the central sporting event a compelling mini-game while still being easy. Alternately I want to take some of those mechanics and run my fantasy "band on the road" game, Orclectric Lyte Orkestrar.

46. Lady Blackbird
45. Durance
44. Hunter the Reckoning
This appear higher than Monster of the Week. Why is that? MotW's a solid game and has some dynamite mechanics. Plus you have a host of clever fan-made playbooks. Combat's fast and easy. There's lots of room to fashion a world. If I wanted to do that Luchadore/Supernatural TV show mash-up I'd probably use MotW. I might even use that system to do this game.

So what grabs me about this game? I'm not completely sure. Some it's nostalgia. I like the way it provides an off-kilter entry point to the World of Darkness. It's a game that suggests the reality presented in any one of the games might look completely different from the perspective of another. That's a fantastic concept. When I ran Changeling the Lost, I made Promethean's a background fixture. They're so strange and dichotomous that  the former couldn't grasp the logic of the latter. And that was great. That's the same thing happening in HtR.

But even more, Hunter focuses on the cost- or at least the best supplements do. Forces beyond their control drive the PC's to this task. It takes a toll on their loved ones. Inevitably it destroys those relationships. And the PCs may well be insane. They have visions, see people as monsters. I love that uncertainty. 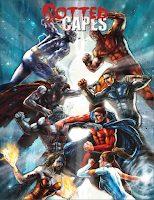 40. Keith Stetson’s Kingdom Management Prototype
Last year at Metatopia I got to play this. It was awesome. I want to see more. I can't say much more than that.

39. Unknown Armies*
38. Rotted Capes*
37. Masks
36. Mummy the Resurrection*
35. Rolemaster Standard System
Don't judge me. I ran Rolemaster for many, many years. I went through updates and edition changes. When they went to RMSS I hung on and ran several games. But I dropped off before the next shift, to RMFRP, hit. Some of that came from buyers' fatigue, but more came from a desire for less complexity in my games. I wanted systems I could hack more easily. I've spun that tale before.

But over the last year I've played in Shawn Sanford's RM Classic campaign on off Mondays. It's goofy fun and each fight feels like it could be the one where I get my arm lopped off. If old Rolemaster is a patchwork of randomly sized pieces, then Standard System has cut things to a regular size but used weak thread. You can see the gaps- the compromises made in an attempt to create unity while maintaining variety. And I kind of love that. If I actually ran this, I'd follow a suggestion made on one of Hans Messersmith's threads: create easy to pick up and evolve playbooks for classes. I think I'd go further and collapse skills down into categories, with the ability to specialize. I'd also unify the maneuver chart and include the hard bargain for success option. 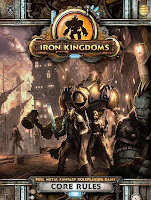 34. War Against the Chtorr*
33. Night’s Black Agents*
32. Mage the Ascension
31. Adventure!
30. Shadowrun*
29. Mutant City Blues*
28. Iron Kingdoms*
When Warmachine came out, people in our group still clung to WH40K. I bought most of the preview sets and tried to convince others to try it out. I managed to get a few of them interested, but the money they'd sunk with GW kept them from picking another game up. It didn't help that the only rules were scattered and hard to pull together. Everyone liked the models, but not enough.

Over the following years I bought some more minis, picked up the main book, played in a Unisystem version, and generally kept my eye on the setting. I liked the world-building, but I'll admit I started to lose a grip on the story and continuity. Magic, mecha, steam-stuff, blunderbusses, goblins with wrenches, Russian analogues...that I could keep straight. The "extended universe" of new factions (and Hordes) lost me. But when the Iron Kingdoms core book came out I bought it.

That thing's more like a textbook than any other rpg I've read. There's so much backstory and detail, and it hits you with that first. That's a strange choice, like an Umberto Eco novel. You have to make it through the first section obstacle course to get to the good part. I'm not sure who the audience is. Not new gamers. I can attest they'd get lost even if they knew the setting a little. Veteran Warmachine folks? They already know the setting. There's so much cool stuff there, but it needs to be teased out. I think you need clear playbooks ala AW or nation archetypes ala L5R. That would be my first task. Finding a way to present the material and setting simply and clearly. After that I could figure out mechanics.