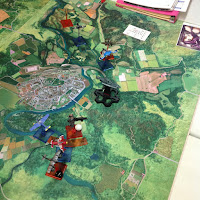 TO YOUR PLANES
We’re six sessions into our Sky Racers Unlimited campaign. The players have hired on as pilots aboard a massive sky vessel taking part in a transcontinental race. You can see the campaign world background here. In short it’s an early 20th Century disrupted by the rule of a cabal of Mad Scientists. They’re gone but the world has only just begun to recover. It’s a mix of Crimson Skies, Great Races, Alt History Post-Apocalyptic, Sky Captain, and general pulp tropes. We use another variant of Action Cards, our card-based & Fate-influenced house system. In particular we’re using minis for aerial combat, which I’ll come back to.

STORY SO FAR
We did a session of character creation and then opened with the PCs aboard The Osprey De Acero. The party got called up to deal with a group of dragons! The monsters had torn through the “A” team of pilots. The PCs distinguished themselves, fighting off the last beasts, and found themselves promoted to the lead role. They also learned that one of the seven competing sky-ships, The Glorreiche Reise, had vanished on their trans-Atlantic crossing.

The party settled into their new role- establishing connections and meeting the crew. The PCs had all been orphans, most of them Demi-Humans who had grown up in a facility managed by Goldens House, who owned the sky-ship itself. So they had a shared background, although they’d had very different careers as a Courier, a Monster-Hunter, an Operative, and a Pirate Radio personality. The characters made some friends and a couple of enemies thourhg their interactions. The Captain made sure they participated in social events, including a grand feast with members of the Russian sky-ship.

The race got underway and the PCs flew forward recon scouting. Just before the lost city of New York, they picked up a weak SOS. It seemed to be land-based, but when they responded, the signal cut out abruptly. The frequency matched that of the Glorreiche Reise. They radio’d back and Captain Al-Taneen briefly debated. She decided to divert her vessel (and lose her place in the race) to support the group checking out what could be a trap. The players spotted a sky-bus from the lost Glorreiche Reise, captured by a group of Sky-Pirates. The party snuck into the clandestine airfield on foot and rescued the survivors. They then flew the slow passenger craft out, under heavy fire.

Back aboard the ship they learned much from the handful of survivors. In particular it seemed that the Glorreiche Reise had been done in by sabotage and that someone had alerted the sky pirates ahead of time. The players recruited the survivors into the crew, even a slightly shady fellow they roped in as a “spy” in the criminal underworld. They also noted that the Chinese sky-ship which had been ahead of them would have received the SOS, but had ignored it.

Next the Sky-Ship had to pick up the European Middleweight Champion and transport him to Baltimore. There he would fight the American Champ in a showdown intended to raise the the Osprey De Acero’s profile in the race and her massive ballroom and broadcasting facilities. That led to discovery of mafia involvement, killing an assassin, conflict in Baltimore with Spanish Revolutionaries, breaking into a Syndicate warehouse, and finally using their planes to conduct a daring rescue operation atop a speeding train. 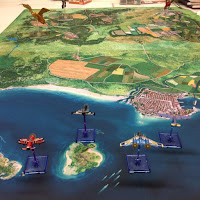 MECHANICS
The game’s gone well- I dig the setting and playing with the pulp tropes. The most significant change has been the miniatures and dogfighting mechanics. We’ve done two fights with that so far: a skirmish and an escort mission. I was really worried, but they’ve been fun and fast. They haven’t eaten up the whole session. Here's my original post on the system and my more final version and plane sheet.


Overall I’m quite happy with things.

THE SKY-SHIPS OF THE GREAT RACE
Below are my notes on the vessels.

THE SILVER TRAVELER
Captain: Budek Vazdoka, first among many with the grand White Russian contingent. Part of a group that wishes to install a dynasty over the current revolutionary set up.
Key Characters: Iris Piip, said to be a former Security Services officer and older than she looks.
Key Aspect: Russian Collective vessel sent as a Great Work to put quiet to the disturbances in the workers paradise.
Other Aspects: Nimble flight squadrons, strong connections, rowdy parties, vast wealth, brewing rebellion, problematic design, political infighting, hidden sections.

THE SHENGFENG (Victorious Wind)
Captain: Teng Zhiyuan (m), a veteran officer of the many conflicts among the warlords of China. Sided with the current Imperial fragment and gained great staus.
Key Characters: Feng Ah Cy (f), a daughter of the current Emperor of the Xiaong Dynasty, one of the largest provinces outside of Cabal control. Borders on Korea and holds portions of that.
Key Aspect: Many “Chinas” exist. The Warlord-Emperor of the largest province hopes that a victory here will demonstrate his region’s superiority.
Other Aspects: Fast vessel, robotics technology, quiet infiltrators, striking appearance, rivalry with the British.

THE CENTURY’S VERDICT
Captain: Dame Cornelia MacArtain, veteran and decorated hero from the raid on Bryde Island.
Key Characters: Artgal O Tuathail (m), Deadly Pilot with Fake-Out Bionic Eye
Key Aspect: The English suffered the worst of the Aurichalc activities, leaving the other provinces in a postion of authority. The marriage of the Crowns of English and Scotland cemented this change in power. But many still harbor resentment and the efforts of the Century’s Verdict are to make clear a new era has arisen.
Other Aspects: Well Rounded Flight Squadrons, Wondrous Entertainments, Anarchist Underground, the Spoils of Bryde Island, Sense of Superiority

HUNTER RESOLUTE
Captain: Sara Matsedisho, late changing Demihuman who already had demonstrated promise when she changed. She has made many sacrifices for her success and will not let them go to waste.
Key Characters: Sibren Kapic, the Wraith, legendary and mysterious arc pilot with a record 37 Kills in Continental skirmishes.
Key Aspect: A collective, trans-Atlantic effort. It joins together some of the new West African Industrial city states with some American East Coast communities. They hope that significantly increased travel speeds will raise up both economies.
Other Aspects: Deadly flight squadrons, American Connections, surveillance drones, pressure to succeed, experimental engines. 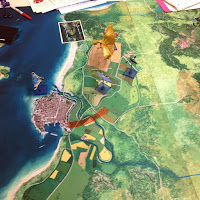