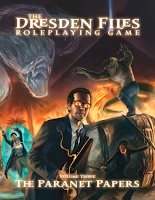 TESTING PLAY
Recently I got to playtest the new Dresden Files Accelerated aka DFAE.

And that’s made me kind of fall in love with the Dresdenverse. Kind of.

Let’s me set the stage though. A scan of the blog shows I dig Fate. That wasn’t always the case. When I first read the Fate rules I did not get it at all. I began with Diaspora. It’s awesome and I love the planetary system-building material in. But I couldn’t grok the mechanics. I got it mechanically, but not how that actually played. Next I tried Spirit of the Century. Nope; still lost. Then I went to Strands of Fate. There it started to clock, despite SoF's weirdly reversed and overelaborate iteration. I had the basics but had trouble when I ran it for Sherri. Finally Legends of Angelerre and then Fate Core cleared that up. I saw how it worked. The realized system did many things I’d already incorporated into our homebrew, Action Cards. But it also brought the awesomeness of Aspects...which I then adapted.

So like Fate. And over time I’ve come to appreciate Fate Accelerated. At first I didn’t, but Sherri kept advocating for it.  My eyes opened when I ran a couple of sessions of Changeling the Lost FAE which went smooth as silk. The system simultaneously got out of the way and supported the play mechanically. I like FAE because it’s close to another RPG system I dig: PbtA. They intersect, coming at the same  base play space and system, albeit from different directions. PbtA focuses on the emulation first and avoids speaking mechanics. FAE presents the mechanics so clearly that they’re almost invisible. It names the +1 Hold and +2 Forward as Aspects, narrows to narrative stats, and offers cost to succeed resolution. I’m not saying they’re the same, but they smoothly transition.

OK, so that’s my main bias out of the way. Here’s the other one.

YOU'RE AN IDIOT LOWELL
I have to seriously qualify that. My exposure prior to getting the DFAE playtest doc included only the first two Dresden novels and a half-dozen episodes of the TV show (two of which regurgitated those books). It didn’t grab me. But I picked up the Dresden Files RPG books anyway. I had a hard time getting through those. I loved the city-building mechanics; that was and is awesome. But as a relative Dresdenverse newbie, the rest lost me. I could see where a setting enthusiast would enjoy it. But felt overwhelmed, especially by the magic system. I never got further than partway through the first book. And I went at it a couple of times.

So I went into DFAE with trepidation, drawn by the enthusiasm of a couple of the players.
And DFAE made me love the Dresdenverse. Maybe not for reading, but definitely for gaming. The way the playtest rules presented the material grabbed me. It broke things up into playable chunks, with background emerging from the character archetypes. Each added new colors to the picture. As importantly, they suggested new questions and ideas. And I got to come up with answers. The material, unlike some rpg writing, opened the world up to me rather than closing down to a single interpretation.

13th Age takes explicitly takes this approach. In their new GM Resource Book, they say “Instead of telling a single story and filling in the details, we aim to make GMs and players feel excited about having tweaked or improved ideas to make them their own. What might seem like incomplete design in other games or game worlds is the product of deliberate exclusion in 13th Age design.” The DFAE material does that. Because it left that room I became excited considering what I could use or transform within the setting. So we got my PC, who owes a little bit to Unknown Armies. He fits within the context. For my plot I introduced a new lost Court of the Fae, destroyed and written out from the records. I introduced a Knight of the Autumn Court and it fit fine within the context of the material. Sherri rethought the role of the Winter Knight and that worked too.

DFAE allows entry into the world while reducing (but not eliminating) the barrier of canon. So my Dresdenverse will vary. Just like my Glorantha and Rokugan may vary. It sent me back to the second Dresden Files RPG volume with new eyes and an appreciation for the material, now that I had a road map.

What Else Did I Like about the DFAE Playtest materials?
Keep in mind this is based off an early version so things may change.


There’s more, but those are the highlights. Bottom line: as a Fate-fan, this deepened my appreciation for what the system can do. As a Dresdenverse denier, this got me excited about the setting. I’m looking forward to the final version next year.
Posted by Lowell Francis at 2:09 PM