IT HAPPENED ON A NIGHT LIKE THIS
Friday October 21st marks the 10th Anniversary of Pelgrane's GUMSHOE rpg. To celebrate that I’ve updated my overview of the system, originally put together Jan 2012. I’ve included some new games, shifted some editions, and added major supporting product releases.

Below is a guide to the various lines of GUMSHOE products, arranged by date of initial publication. I've provided a brief description of the premise and what new ideas each iteration brings. As well, you'll find a link to the core book for the system, reviews for that core book, and links to other products in that line. In the case of Trail of Cthulhu, I've provided a link to the Gamer's Guide to that RPG.

BASICS
Pelgrane Press has used their GUMSHOE rpg engine across a number of game lines. The mechanics of that system uniquely focuses on mysteries and problem solving. Not a generic system, GUMSHOE instead has a set of base mechanics and ideas tweaked, shifted and added to for each version- aiming to offer the best genre emulation.

Investigative abilities include fields of knowledge such as Ballistics, Forensic Anthropology, and Streetwise. These have a rating which serves as a pool for use of that ability. Possessing at least a one rating shows the character has expertise. When a player uses that ability to examine a scene, they do not have to roll. Instead, if there are core clues present which can be found by that means, they locate them. Core clues are those which move investigators to another location or major plot element. Points may be spent from an investigative ability to gain additional or extra information, at the GM or player's suggestion. These help fill in the picture and give that investigator the spotlight for play.

So for example, the core clue is the location of a shady doctor. The GM might present the clue via a couple of abilities. A player with pharmacy might note a pattern to the prescription drugs. One with accounting might be able to quickly go through nearby papers. Another with electronics might be able to pull up GPS details on a cell phone. Any of these can suggest another avenue. There may be more in a location. A spend can add to the overall picture. Foe example a Pharmacy spend might give the group a better sense of what the doctor’s dealing in, what their reputation is, or how their overall operation might work.

General abilities cover areas where players can risk failure- Athletics, Health and Shooting for example. Use of these abilities is uncertain and success or failure can have a dramatic impact on the story.  In this cases screwing up offers a spotlight moment, asks for player choices, and shifts play. General abilities also have a rating which represents a pool. To make a test, players roll 1d6. If they wish they may spend from the relevant ability's pool and add that to the roll. Players must meet or beat a difficulty set but not revealed by the GM. General ability pools require special circumstances to refresh (end of a story, time in a hospital, etc).

GUMSHOE now has an SRD for gamers and designers. It is available as both an OGL and a CC license product. For more details on this, see this post on the Pelgrane forums. So far we’ve only seen a couple of products take advantage of that: Against the Unknown, The Derelict, Just a Game and Spookshow.

On Horror: Several of the GUMSHOE games offer straight horror or at least horror-tinged mysteries. Go with Esoterrorists if you want an organization battling against an occult foe. Go with Fear Itself if you want unprepared innocents trapped in a horrific situation. Go with Trail of Cthulhu if, well, want Cthulhu.

The Esoterrorists (2nd Edition)
Premise: Players take the role of agents for the Ordo Veritas, a benevolent conspiracy. They battle against the Esoterrorists, a network of radicals and maniacs dedicated to breaking down the membrane between this world and the supernatural outside. They do this by crafting terror and manifesting otherworldly creatures. They operate like a terror network, with a focus on fear and publicity.

System Additions: This book sets up the basic GUMSHOE rules, with expert agents operating in a modern setting. The second edition significantly expands that material. On the rules side it cleans up the presentation and clarifies points. It adds a few new innovations, but keeps things simple and direct. On the campaign side, it massively expands the background, explains the concepts more fully, offers more developed campaign set up, and presents several fully-fleshed scenarios. Everything's very well-done and presented. I would recommend this as a first Gumshoe game if you're working with a group unfamiliar with Call of Cthulhu (otherwise Trail of Cthulhu might be better).

Fear Itself (2nd Edition)
Premise: Players take the role of characters, perhaps victims, in a modern horror setting of slashers, creatures and maniacs. Fear Itself aims to simulate modern pop horror, especially cinematic horror of movies like The Ring, Pulse, and House of Wax.

System Additions: The list of abilities has been modified to reflect the lower relative skills of characters in this setting. The rules also include very basic psychic powers- with dangers associated with those. Characters can start from a list of stereotypes, and/or choose special Risk Factors- drives which explain why the character remains in the story rather than fleeing. Additional rules for stability appear as well. The new edition takes the original slim volume and massively expands it. It offers better guidance for different kinds of campaigns and one-shot play, clarified rules, monsters, and example scenarios.

Trail of Cthulhu
Premise: Investigators against the Cthulhu Mythos. Adapts the key ideas of Lovecraft's work and the rpg traditions established by Call of Cthulhu into GUMSHOE. ToC notably moves the timeline forward, setting the game generally in the 1930's, rather than 1920's.

System Additions: Retooled ability sets to fit the genre. The rules offer two approaches to campaigns and mechanics, Purist versus Pulp, with the latter offering the players more of a fighting chance. Characters now have Drives which guide their behavior and choose a Occupation to start. Occupations determine starting abilities, credit rating and special talents. Stability has now been paired with Sanity as two distinct abilities. Those rules, including madness mechanics, have been expanded.

The rules offer a significant discussion of the Cthulhu Mythos, followed by an extensive bestiary for creatures from there and elsewhere. Rules for setting-specific magic and tomes appear as well.

Mutant City Blues
Premise: An event ten years ago resulted in 1% of the population gaining super powers. Players take on the role of officers with powers dealing with "heightened" crime and criminals. A predictable structure and pattern to the superpowers allows for investigations based on meta-forensics.

System Additions: An extensive set of super-powers, some of which operate as investigative and some as general abilities. Unlike other superhero games, powers must be chosen along certain lines. These lines make up "The Quade Diagram" a resources for players to figure out which powers associate with which evidence. Other abilities and rules focus on the police procedural nature of the game.

Ashen Stars
Premise: A far-future sci-fi setting in which players take the roles of "Lasers," freelance law enforcers. These operate in the Bleed, a region of space once controlled by an empire known as the Combine, now left to its own devices. Navigating between disparate planetary cultures and races, the Lasers balance ethics and the need to make a buck. Moves the idea of mysteries forward more broadly to problem-solving.

Night's Black Agents
Premise: Players take the role of spies who have been "burned" by their company. The reason: their discovery of a massive vampiric conspiracy behind the scenes. Now the PCs must remain alive while striking back at the monsters. Play is about survival, building resources, and putting together a picture of your actual foe. 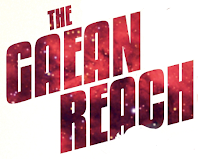 The Gaean Reach
Premise: Based on Jack Vance's science fiction, in particular "The Demon Princes" series of novels. Players become hunters seeking vengeance on the mysterious and elusive Quandos Vorn. They have to seek their quarry through investigation, infiltration, and deception. The game take place in a golden-age sci-fi universe more of imagery than hard technical details. It has the slimmest version of the rules so it might be a good entry point for those looking for a “problem solving” vs. traditional mystery game.

System Additions: Players use a system of build cards to construct their characters. The group defines the details of why they're pursuing their quarry. The Gaean Reach also adds a version of the Taglines system from Skullduggery and the The Dying Earth Role Playing Game. This allows players to gain benefits by integrating premade phrases into their play. The basic GUMSHOE system on offer here is relatively light, with some interesting new takes on abilities. It doesn’t have the deep sci-fi mechanics of Ashen Stars, focusing instead on a more narrative approach.

TimeWatch
Premise: Players are members of TimeWatch, recruited from across history to fix and maintain the one true timestream. Missions may require the team to head to a particular date to fix an obvious change. On the other hand missions may also be more subtle, requiring the characters to investigate and piece together the specific sabotage.

System Additions: TimeWatch offers a set of character archetypal competencies, for those who don't want to build from scratch. This includes non-human options (androids, disembodied brains, intelligent psychic dinosaurs). The game offers some interesting time-themed abilities with additional effects (Paradox Prevention for example). Because it has to cover a broad range, it has a slightly slimmed down ability set. Chronal Stability offers an additional damage track. It obviously includes material and rules for handling time travel, reality shifts, and destroying the timeline.

Bubblegumshoe
Premise: The first major GUMSHOE product not released by Pelgrane. Bubblegumshoe covers teen detective dramas like Veronica Mars, Nancy Drew, Mystery Team, Brick, and beyond. As you can see from the list there’s a large range of tone available. The players run teen sleuths in a town, dealing with crimes, parents, and the social intrigue of school.

System Additions: It has a slightly slimmed down list of abilities. That’s complimented by a relationship system. On the one hand this offers a map of connections and a hook for play. On the other PCs can draw on connections to fill out their abilities, like calling on a friendly uncle cop for insight on a forensic question. Bubblegumshoe also de-emphasizes traditional combat. High violence and guns end games rather than being a go to option. Instead we get the Throwdowns, a detailed set of options for social conflicts. Generally there more material on the human side of mysteries, using NPCs, building a town, etc.

Ken Writes About Stuff
A series of short essays by Ken Hite produced monthly by Pelgrane Press. These alternate between discussions of Cthulhu Mythos creatures (odd issues) and deeper looks at places and ideas for GUMSHOE (even issues). These are amazing and diverse. Each focuses in depth on a particular topic. I recommend checking out the list to see if any hit your interests.
Posted by Lowell Francis at 10:36 AM