What the What? Valiant Universe RPG 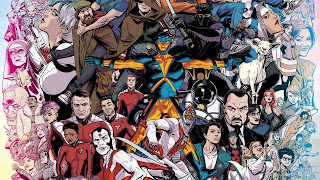 So Valiant, huh? Apparently that’s a comics line. I’ll start by proclaiming my stupidity, which I come by honestly. By the early ‘90’s I’d stopped buying comics, maybe a year or two before Image launched. I missed the entirely of the ‘90’s- over-the-top character designs, pouches, collectors editions, variant covers, 53 different X-books, and finally the bubble and collapse.

I only returned and learned what was happening in the Big Two in the early ‘00s. I bought some comics, not many, and filled in my knowledge with blogs and choice collections (Starman for example).

So I hadn’t really realized there’d been an original Valiant comics when I saw people talking about the new Valiant Universe line. It really only popped up on my radar when the Wait, What podcast mentioned it. Then the Valiant Universe RPG came out. As I’ve documented I love superhero rpgs. I took a look at the quickstart, but my brain failed me. I didn’t know the characters, so I had nothing to grab onto. When core book landed, I kept my eye on the Valiant Universe RPG. But other games floated to the top of my buy list.

Then we got a new and exciting Bundle of Holding. It contains several pieces of the Valiant Universe RPG plus a host of starter comic collections for the line. I’ve just gone through all of this, so I’ll give my initial impressions from a place of ignorance about the universe. This isn’t a review- more an overview and description to inform your decision.

You can find several different flavors of the VURPGQS on DriveThru, each with a different character focus and sample adventure. It looks like those feature different stories than those in the core book, so that nicely extends things. The Comic-Book Play Guide is very well done- we’ve seen other superhero rpgs do this before, but nothing on this scale. It’s worth reading through. The designers have done a good job of showcasing main and corner case rules there.

CORE BOOK
Right away you’ll notice the nice graphic design. It’s clean and open, making good use of the Valiant artwork. I liked MWP’s Marvel Heroic, but the design could be a little dark. This avoids that problem. You’ll also see we start with the characters and organizations of the universe. Each gets a couple of pages of backstory. These write-ups avoid mechanics, only offering some tags/cues (which I’ll come back to). The game’s focus firmly stays on the Valiant Universe and it’s a good sourcebook if you’re interested in that. Despite that, it does include mechanics for making your own character.

The main body of the rules run from pages 42 to 59, and that includes some discussion of comic arcs and stories. It’s amazingly tight. Character creation’s only nine pages. So what’s the system like?

It uses variable dice for the stats ala Savage Worlds (d4, d6, d8, d10, d12). It does the same with powers ala Marvel Heroic. It also reminds me of MHRPG with its broad treatment of power effects, but doesn’t do the same kind of pool building. Powers provide a fiction, and some can have mechanical effect (on armor). So it’s a little like Worlds in Peril. It does allow for some mechanic effect specifics (dice replacement, die keeping, increasing armor, etc).

Generally players roll their stat die for challenges. They can roll a relevant power die, but then drop the lower result. They add modifiers to that result and compare it to a d20 roll by the Lead Narrator (the GM). Modifiers are open-ended and an arbitrary LN choice. There’s one exception: if the player rolls the same number as their Luck stat, they automatically succeed. In combat, the LN’s d20 challenge die is replaced by the appropriate dice of their foe.

Everything has Cues from PCs to the villains to the story itself. These are quick descriptors (one or two words). They’re much tighter than Fate’s aspects. They don’t seem to have a mechanical effect, instead acting as prompts. Character “dispositions” are more like aspects, though again no apparent mechanical effect. Tags are like dispositions, I think, but it’s unclear what they do. I think they’re just color. Everything seems coded to offer players hooks for their scenes.

Valiant Universe also has a Plot Point system. PCs earn them for good narrations. Like Marvel Heroic, the Lead Narrator also earns PPs. When players spend one, the LN gains it. You can use PP’s make a change to the game. Any change. It’s hugely broad. Oddly it’s mentioned (and the play examples show) players can spend PP’s to create negative changes for themselves. But there’s no mechanical incentive to do so. The system focuses on story over detailed resolution or mechanics.

THE TWIST
Here’s Valiant Universe’s big hook, though. Scenes are divided, as you’d expect, into turns. The Lead Narrator describes the situation/problem and the players take a “narration” of their action. When everyone’s done that, a new turn begins until the scene’s completed. So far, so good. Here’s the interesting tech:

“The LN starts a Scene and is the LN for every turn until a Scene is accomplished. Once a Scene is finished, the player to the right of the current LN becomes the new LN. The new LN starts the first turn of the new Scene by providing a narrative of the current situation, and so on, as described above.”

The LN also has a character, so they always get to play.

It’s wild concept, making this really a story game (at least in my head). I can see it working with the way they’ve got the adventures structured: a series of event briefs written out which have to be solved. If there’s a drawback, it’s that these run on railroad tracks. How you solve a problem remains open, but you’re always starting the next scene with X events established. On the other hand running without an established would be more challenging and require more negotiation for a game. The rules talk about the “Yes, and…” of improve and it’s going to require a lot of that. But there’s little discussion of how to build those stories.

The rest of the book contains full-write ups for 36 characters from the comics, plus abbreviated notes for 48 secondary characters and mooks. Finally there are Event Briefs (adventures), built for particular characters or teams. You could use these with your own PCs with some adaptation. There’s also a longer campaign linked adventure at the back.

THE COMICS
The highest level of the Bundle contains ten comic collections- the first four issues of different series. I expect more will be added. Given my absolute naiveté about the line, I’ve gone through each collection and read the first issue. Here are my impressions. I’ve ranked them from least excited to most interested:


I’ll finish reading all the collections (except Harbinger). I’ll probably pick up more of those last three books, definitely more of Rai. Overall I’m pleased with the comics. They’re more than worth the price of the bundle and give a decent sense of the Valiant Universe as a whole. I do wish we’d gotten a Faith collection, but based on the strength of these I’ll pick that up on my own.

There’s also The Valiant Universe Handbook 2016 #1 included. It echoes the classic Marvel Universe Handbooks. It’s a good resource for the rpg. I wouldn’t read it until after you’ve finished reading the collections.


If you like superhero comics, it’s worth picking up this collection-- especially if you haven’t checked out Valiant. If you’re a superhero rpg fan, it’s also worth getting. The rpg itself offers a massively loose, improv-heavy, superhero story game. It’s unlike anything out there- more open than Marvel Heroic or classic Marvel Superheroes. But even if that approach isn’t your bag, VURPG has a ton of good resources and ideas. There’s even a large campaign module I didn’t even cover above. Going through everything I spotted plot point and character material I’m stealing for my Mutants & Masterminds campaign. That makes it worth my time.

Full disclosure: I received a free copy of this bundle.
Posted by Lowell Francis at 1:00 PM