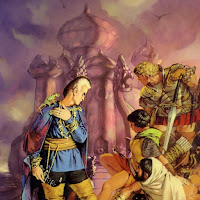 BEARS DON’T DO TINY CRITS
As I posted a while back, I try not to work on my Gauntlet 2-4 shot games any sooner than two weeks beforehand. It keeps my sanity and structures my schedule. So obviously I’m going to break that rule right now.

In December I have six sessions of Rolemaster on the schedule. That’s broken into a Thursday and a Sunday run of three sessions each. We’ll be playing using Slumbering Ursine Dunes and Fever-Dreaming Marlinko, an exciting Slavic-flavored setting for Labyrinth Lord.

I'm running three sessions of Slumbering Ursine Dunes with Rolemaster in December. The Dunes offers a point-crawl fantasy exploration game set in a Slavic-tinged world. We may even stop off in Fever-Dreaming Marlinko. We will play from pre-gens, rules will be taught, sessions run about 2 1/2 hours

*Wait, go back. Did you say Rolemaster?*

Yes—if you haven’t played it, you’ve probably heard of it. Here’s a chance to check out what’s groovy about it without getting too far into the complexities. I’ll have a simple one-page cheat, we’ll use nice Roll20 characters, and the GM will take care of most of the combat look-up & resolution. I ran RM for years and I’ll be using my simple version of several elements. I’ll be fun.

Come and try it out! If not for the system, then for the setting. It has Slavic Werebears!!! What more could you want!

I’m super excited for this. As of this writing, I even have a seat available in the Sunday. But consider signing up for one or both series in any case. We have waitlists available and seats might open up between now and the start of December. 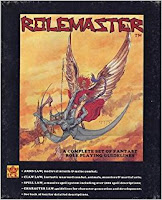 MAKING MY BONES
I ran Rolemaster for many, many years. When I first bought it, they printed the rules on parchment and cardstock. That didn’t even really consider itself a system, just pieces and parts that could be fused together. Faith and willful ignorance of system gaps glued that game together. Over the next two decades I stayed on through multiple reformattings and eventually a massively revised edition, Rolemaster Standard System. RMSS finally burned me out. I gave away all of my copies and materials.

But then a couple of years ago Shawn Sanford ran some Rolemaster for Sherri and I. We saw some of the bits and hilarity that made it such a distinctive game. Super trad, super chart-filled, and super full of crunch. Trad I can handle-- that’s just a flavor. Chart-filled I can manage—I got good at making RM flow quickly. Crunchy I can deal with by sanding down the rough edges. So that’s what I want to look at today. What do I need to do to make Rolemaster simple and accessible for a three shot game with new players?

Note: most of this is inside baseball for folks who know Rolemaster.

WHAT DO THEY NEED TO KNOW?
One goal will be to reduce the info the players need to manage. A RM character sheet has a ton of detail, but not all of it actionable at the table. For example skill and combat values come from multiple sources (base rank, stat bonus, levels, items). But only the final value is really relevant at the table. The details come into play mostly for advancement.

The same thing for characteristics. Each of the ten stats has a value, potential, racial bonus, and base bonus. Some give development points for advancement. All we need to know for a three shot is the final total. While I’ll have a full character sheet with the details the player sheet will be minimal.

What else has to be recorded to make this workable? Profession, Race, Level, Armor Type, Defensive Bonus, Hit Points, Maneuver penalty (for some armor). Cutting things down to that makes it easier to spot what you need to know. Unless you’re a magic-user, but I’ll come back to that.

WHO GOES FIRST?
Initiative’s always been wonky in Rolemaster. Throughout the Companion series we saw multiple versions, most involving complicated action costs and point spends. Some remain among the craziest, most convoluted things I’ve ever read. For my version we’ll go with one of two approaches. A) Everyone rolls at the start of a fight and we rack ‘em up. I’ll probably have players roll d100 plus Quickness bonus. B) An even easier roll determining which side goes first. Winning side, then losing, then mooks. Rolemaster puts emphasis on missile weapons going first, so in the case of the former, they’d get a bonus to the roll. In the case of the latter, we’d break it up into phases (all missiles and then all melee).

MOVEMENT/MANEUVERS
Rolemaster has a complicated Movement/Maneuver system. If you need to roll for a non-attack action, there’s a table cross-referencing difficulty and roll, resulting in percentage of accomplishments. In play, we always eyeballed results, rather than stopping off to work through that. Rolemaster Standard System added an innovation of easier action result charts. They still had different ones for each category of skills (so about 30), but they shared a basic format. For our play, I’ll adapt that. Players will roll d100 plus relevant skill modified by difficulty.

I may simplify this more, but in the end I want something I can call quickly and players can pick up on. 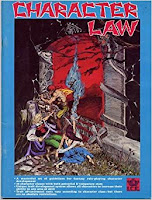 INFINITE SKILL
Basic Rolemaster has a tight set of skills, all action or combat elements (Perception, Stalk/Hide, Maneuvering in Armor). But it also has a list of “Secondary Skills” as optional elements. This consists of about 40 skills. They’re…varied-- Contortions to First Aid to Herding to Rowing (and Sailing) to Tracking to Wood-Carving. These arrived in later editions of Character Law as a way to broaden character development. Then Rolemaster Companion II added a complete and compiled 20 page skill list. When they reworked Rolemaster into the Rolemaster Standard System, they leaned into that. Now we had a multi-page character skeet fat with individual skills.

For a three session game, I don’t want to worry about that.

Instead I’m going to put a short list a “Secondary Skill” listings on everyone’s sheet. I’ll distribute bonuses across those. When a player wants to do something and they want to declare knowledge of it, they can name a skill and write it in next to the bonus of their choice. We’ll then decide on a associated stat for it. This will let players define their characters on the fly, make skills effective, and create an interesting set of resource choices.

ARMING YOURSELF
One of the largest challenges to running Rolemaster comes from the combat charts. Weapons have individual charts. A successful roll usually moves players over to an additional critical table (Slash, Crush, Pierce, Heat, Shock, etc). That’s the cornerstone of the system and why it’s dismissively referred to as Chartmaster.

But that’s also the secret sauce.

Those charts are great, wild, and fun. Over the many years I ran it weekly, I got good at looking things up. I did it quickly. When I played online with Shawn Sanford, he had players read their own weapon chart, but he handled the Crits. That worked since the table consisted of mostly RM vets. For what I’m doing, it isn’t as great a choice. I don’t want to dump that in new players’ laps. I also avoiding an app. I’ve tried those before but they’ve been slower than handling it by hand.

So what I am going to do it a little meta, a little behind the curtain. Since I’m making pre-gens, I’ll be choosing characters’ weapons. For these, I’ll go with the most common types (Broadsword, Dagger, Battle Axe, Longbow, etc). I can keep that pool manageable rather than having a dozen different weapons (Scimitar, Falchion, Main Gauche, Rapier) to flip through. 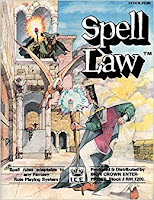 WHAT HO, MAGIC?
Magic in Rolemaster’s complicated. Like really, really complicated. Just buying spells involves investing in lists of spells at level ranges. Spells cost power points. Casting a spell’s a maneuver—with higher success modifying the target’s resistance. Elemental attack spells have their own tables and often specific critical types. Ideally I want to reduce the workload on the PC spellcaster down to: what do the spells I know do, what do they cost, what do I have to roll? I think that should be easy. I can make easy, individual cheat sheets for this.

A little more complex is the issue of spell prep. See RM has a delightful restriction of spell casters. Spells usually take three rounds to go off. Two of prep and followed by an activation round. Yes. Three rounds. However, if the level of the spell’s three to five less than the caster’s level, they can cast it with one round of prep and one of activation. Given PCs will be level four, that means only first level spells.

However, there’s a mechanic to cast faster—it just means that you have a nastier effect if you mess up your casting. There’s also a mechanic for casting spells higher than your level. I have to figure how to write those options clearly. Other variations exist, but I want to cut those down to a manageable set.

I suspect magic will be the most involved section to work through.

OMFG THIS ISN’T ROLEMASTER
Maybe? Maybe not? I’m sanding off the rough edges, but frankly the changes fit into two categories. A) a focus on limited sessions of play . That means hiding the character creation and non-play elements away. B) the kinds of changes I usually made when I ran anyway, like easier initiative.

So there it is—and though it may not seem like it, I’m super excited and looking forward to this. I’m almost giddy with the thought of rolling those percentiles and dishing out exquisite damage. Delicious!
Posted by Lowell Francis at 4:12 PM