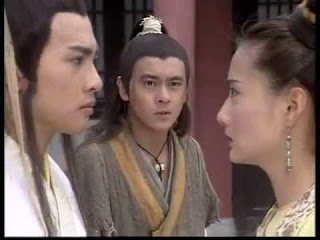 I've been working on the complicated and fraught relationships for Hearts of Wulin PbtA. I want these to be the bread & butter of the melodrama. Each entanglement represents a complicated connection with a person, group, or institution. They're all triangles, with a third party creating problems. I hope to work these like Flags in other games, with players being able to highlight them.

Characters will begin with three entanglements, one of which must be romantic. I've created examples, but I hope players will make up their own or remix these.

ROMANTIC
Note that love here can be strong & passionate or a passing infatuation.

Posted by Lowell Francis at 3:11 PM