I declare this samurai week for no good reason. I love tales of the samurai- in movies, books, board games, video games and RPGs. I've run a few samurai-based campaigns, using different systems each time. This list assembles chronologically the major (and minor) RPGs of the genre. I've focused on the idea of "samurai" rather than a historical setting or secondary elements. That means I left off books like the excellent Wu Xing: The Ninja Crusade since it focuses on ninja. I've also skipped Steampunk Musha and Gareth-Michael Skarka's forthcoming Far West since samurai feel chrome there. I struggled and ultimately decided to omit Kagematsu. In that game only one person plays a samurai, so it doesn't quite fit.

I based my chronology on the pub date of each game's first edition. That offers perspective on how products in this genre evolved since the release of Bushido 1e in 1978. I lumped some things together (all of L5R, both Usagi Yojimbo games). Since I collect samurai games as resources I've tried to focus my comments on the each game's utility for the 'generic' samurai GM. I'm sure over the course of this list I'll miss some important games. if you've found some or these things more or less useful, tell me in the comments. 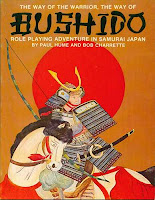 1. Bushido
Bushido originally came as a bundled booklet set, not unlike the D&D White Box set or Traveller. I briefly owned a copy of that incredibly difficult to read version. My experience really began with Bushido's third edtion from Fantasy Games Unlimited. Around here FGU had a reputation for complex and arcane rules systems (Aftermath!, Space Opera, Daredevils). As the time I still focused on easier systems, mostly from TSR. But I bought this and kept trying to figure it out. We never played Bushido as an extended campaign in our group. Instead I remember playing several one-offs with my friend Gene Ha and his younger brother Donn.

The amazing thing about Bushido is how well it holds up. It remains a superb resource for anyone running a samurai campaign. I return to it for inspiration. You can see Bushido's DNA in many of the best samurai game descendents- in campaign structures, honor systems, approaches to magic, skill breakdowns and so on.

2. Land of the Rising Sun
A fairly substantial booklet game, I only saw LotRS a few times in game shops. Apparently Lee Gold of Alarums & Excursions had run a Japanese-based Chivalry & Sorcery campaign for years before being convinced to write up her notes. The rules are apparently complete, so if you like the old school detail of C&S, you'll find much to love here. There's an interesting discussion of game pacing at the outset- something I never considered- and how that favors one kind of character over another.

The game itself is old school in many ways, with random tables for everything, from race to class to background. While it has many interesting details and concepts, you have to wade through tons of hyper-specific dross. LotRS feels like a GM's homebrew notebook from the early days of gaming. I like the smithing and crafting systems, bizarre stealth mechanics, divinity & the afterlife, and businesses. But much of what's given here can be found elsewhere. 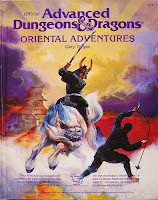 3. Oriental Adventures
OA was a crazy, exciting mess when it came out- smashing together many genres in one book. We certainly loved the various bits offering cool new stuff for AD&D. However, we never considered it as its own campaign setting, but rather as new rules and options we could jam into existing games. Bushido had floated around in the group for years, so a comparison was inevitable. OA paled as a samurai game, but won as accessible and wild junk for a fantasy campaign. Kara-Tur in the Forgotten Realms would weakly try to capitalize on these ideas. Interestingly we really started to integrate the material when Big Trouble in Little China came out the next year. WotC revisited this concept later with 2001's Oriental Adventures. That brought some of the systems to D&D 3.0 with a more coherent approach, blended with the set up for the d20 version of L5R. I think there's some great ideas in that later version (particularly the races) but it ultimately isn't that useful.

4. Land of Ninja
This is an odd game. When Avalon Hill bought the rights to Runequest, they must have imagined a tentpole game which could be used across many genres. That was an interesting approach for the time, but Land of Ninja and Vikings suggested a more historical bent for the system. That made the line seem stodgy and caught up in the historical & wargamey roots of its company.

The boxed set itself feels like a kludge. Typos and strange layouts abound. Despite being co-authored by Bushido's Bob Charette the material is scattershot. I never feels like there's a coherent approach or clear setting for the game. Kevin Ramos' art, which I like in other contexts seems strange here. Still there's a lot of good background material offered- useful for GMs of other samurai games. If you're hunting for a cultural primer, you could do worse. The scenario book is GM friendly as well. The hand drawn map of Japan's excellent.

When Mongoose got the Runequest license they published Land of the Samurai. I flipped through and thought it seemed thin, but I haven't fully examined it. 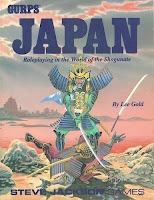 5. GURPS Japan
As Eric Aldrich points out in his excellent review (A watershed moment) this was the first GURPS 'history' books. It set the pattern for many sourcebooks to follow. As a samurai and GURPS fan, I picked this up immediately and was underwhelmed. It is decent, but like several other samurai supplements it feels fragmented and incomplete. GURPS Japan tries to cover so much ground that any particular concept gets superficial attention. A good deal of the book cover GURPS mechanics and details. In the whirlwind tour we also get discussions of alternate samurai genres and later period games.

I liked it, but certainly wanted to see more. GJ went through another edition, but I can't say how much that revised and developed the material as I only owned the first. Trivia: we ran a samurai miniatures game at Gen Con '88 or '89 using the GURPS mechanics- an ambitious and (in retrospect) stupid plan.

6. Ninja Hero
We used Ninja HERO as the backbone for the our most consistent samurai campaigns. I ran a short samurai game and later another GM used it for a ninja setting. I hesitated putting NH on the list since it isn't fully devoted to samurai games, but there's enough source material offered to make it useful. It presents a solid way to handle combat and maneuvers, without extensive and complication new sub-systems. Still as you can imagine with a HERO product, the combats moved slowly. Game systems have advanced on since this came out, but Ninja HERO really encouraged my interest in the genre. Because of this I created a fully fantastic non-Japan samurai inspired setting (using resources like GURPS Martial Arts and The Palladium Book of Weapons and Castles of the Orient). So I was ready later when AEG came out with its samurai-centered Asian culture mash-up, Legend of the Five Rings. 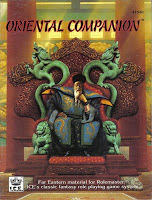 7. Oriental Companion
Rolemaster had always had a serious focus on martial arts- with systems for katas, ranks and styles mixed throughout the system. High level Monks could be among the most dangerous characters in the game. RM grew to become one of our two core games, along with GURPS, after we quit AD&D. ICE decided to parallel HERO games in creating "genre" books. In the case of Rolemaster, these were a mess. Classic RM already suffered rules bloat with the Rolemaster Companion series. The genre books didn't offer a coherent approach, instead they said "Here's a bunch of rules and sh*t, enjoy!"

The Oriental Companion exemplifies that mess. To begin, why call it an "Oriental Companion" when you're focusing on samurai-era campaigns? They use that strange term throughout. The cover presents a Chinese Dragon Emperor- but there's nothing covering non-Japanese themes inside. The material presented echoes every any other samurai-themed rpg with little novel or new. I only bought this as a RM groupie. Bizarrely, as I'll mention below, I spent significant energy adapting L5R to Rolemaster, but Rolemaster Standard System. When I ran an extended campaign using RMSS this book ended up little help.