TWILIGHT OF THE SAMURAI
Today I finish up the list I began Monday, tracing the evolution of the samurai RPG. We begin with the big hitter, a game that introduced many elements now core to samurai campaigns. For the first part of this list, see Samurai RPGs: Kami & Katanas (Part One). 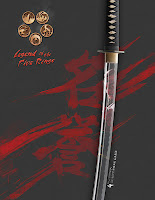 8. Legend of the Five Rings
It is fair to say that L5R changed the face of samurai gaming. Samurai RPGs before this had fantastic elements, but clung tightly to Japanese historical roots. Even the Oriental Companion was that way if you searched & replaced "Oriental" with "Japanese." But Legend of the Five Rings went in a new direction, creating a world influenced and adapted from Japanese themes and modern high fantasy, mixed with a peppering of other cultural details. It didn't always work; the treatment of the religion in particular cut off interesting options. But the material as a whole held together and was compelling. When the CCG came out, I immediately began planning how to do an RPG with it. My samurai miniatures rules (Ge Koku Jo) came out of a desire to play L5R skirmishes.

Then AEG published the RPG. First edition was and is a mess, but it had awesome stuff. The setting really worked; maintaining clan balance and offering interesting options. You can see my overview of that edition here: Samurai Fiction: A Game and Setting Worth Returning To. Of course I could not leave well enough alone. The mechanics felt too light for my tastes, so I spent hours adapting it to Rolemaster to add crunch. It was fun, but by the time I finished I started to become jaded about mechanics-heavy games. Then L5R moved on to a second edition, moving the meta-plot forward and irritating me (as you can see from my overview Metaplot Samurai Theater 3000). But I ran another campaign, this time adapting it over to Storyteller because I'm a dork and can't leave well enough alone.

I still love first edition L5R. Mechanics aside, it has the strongest set up and material. However I have been pushed recently by those whose opinions I respect, suggesting that L5R 4e is awesome and even better than 1st...

9. Usagi Yojimbo Role-Playing Game
Usagi Yojimbo's one of the great underrated comics, universally praised and deserving of wider audience. Gold Rush Games published this slim adaptation of the comic in 1997. It used a streamlined version of the Fuzion system they invested in. I picked it up and while it was generally well done, there wasn't that much I couldn't find elsewhere. It had a modest amount of UY background, including a new comic, and some general material on samurai games. But it didn't offer anything new I could bring to campaigns. On the other hand, I haven't seen the newer game adapting UY. Usagi Yojimbo uses a completely new rpg system, this time from Sanguine Productions Ltd. That one's twice the size and apparently still in print. 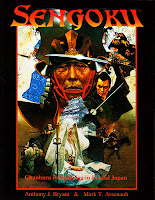 10. Sengoku: Chanbara Roleplaying in Feudal Japan
I really wanted to like Sengoku. I picked up the hefty first edition hoping to find material to borrow or even a system I would fall in love with. But I didn't care for the Fuzion system in its extended and elaborate form here. Sengoku offered some interesting bits and material I could lift: names and clan concepts, some history and background. But overall I was disappointed. It felt like a messy jumble. With L5R starting to blow the doors off of samurai gaming, it arrived at exactly the wrong moment. If Sengoku had come out a few years earlier it might have appealed more to me. There is a second, revised edition of the rules which I haven't seen. It may be that they made changes and additions which push this game to a new level.

11. Legends of the Samurai
I've read through some of the parts of Legends of the Samurai, a historically aimed d20 adaptation. There's a core book made up of several smaller sections, each available as pdfs. The d20 movement meant that just about every niche received an OGL sourcebook. In retrospect, samurai games got off lightly (Rokugan Campaign Setting, The Quintessential Samurai). This particular version is based more in historical Japan, with fantastic elements added in- like Bushido or Land of the Rising Sun. New classes, new feats, new skills, new magics, new prestige classes. It pretty closely follows the model of d20 sourcebooks, giving players all the mechanics to emulate the genre. I really didn't see anything here that stood out for me.

12. The Blossoms are Falling
I hoped to like Burning Wheel more than I do. Many smart and creative people enjoy it. It has some striking concepts, but the presentation and system premise never worked for me. I slogged through the rules, but it never hooked me. Knowing that, I still picked up The Blossoms are Falling in a math trade. I thought perhaps it could change my mind about BW or at the very least could offer some interesting ideas and materials to use elsewhere. Like many other games on this list, it takes an alternate approach to historical (Heinan-era) Japan aka Nihon. It has some modest historical detail and some game fiction. The former's too light and the latter's not something I usually enjoy. I wanted to like the "Clan Burner" material- I think the idea's great, but it is more a list of questions than something significant for gaming. Unfortunately there's very little here than hasn't been done elsewhere and better. BW fan may find some useful resources here, but I wouldn't recommend this for the general samurai GM looking for ideas.

13. Ronin: Oriental Adventures in Tokugawa Japan
Wow...rarely have I had a harder time reading a gamebook than going through Ronin. Three columns, almost no gutters, badly handled full-justify text...gah. What you get is a wall of text. The book has a great deal of material on historical Japan of the Tokugawa period, but I can't imagine actually being able to do more than skim. The first third+ of the book covers background material before we ever get to mechanics or any explanation of what the game is about. We shift from history to mechanics on honor with little transition. Apparently this is a d20 3.5 game, but you wouldn't know that until you were in the middle of it. It might be for Pathfinder- that's how RPGNow lists it. It covers the check boxes of d20 supplements: new classes, new class powers, new skills, new feats, new spells. The material given here is richer than Legends of the Samurai, but it is nearly impossible to read and follow. It desperately needs to be reformatted for ease of reading. If that happens, it could serve as a decent resource for samurai GMs.

14. Blood & Honor
The writer of the L5R RPG returns with another take on samurai. Blood & Honor offers an interesting take on the genre: loose, fast, and player controlled. Broad actions and swift death rule the day. I like it on its own and would make a solid short-run campaign system. But even more than that it presents a great set of tools to use in other games. The Clan Creation system here works and gives interesting options. Unlike Blossoms, the structure gives weight to the choices. I like the idea of collaborative clan building and of seasonal actions. I've I were to do a broader-scale samurai campaign I would shamelessly rip this off. The advice on role-playing and gamemastering alone is worth the price of admission for me. I originally bought this as a pdf and then had to buy a paper copy because I found it so useful.

15. Iron Dynasty: Way of the Ronin
I really love the insanity of this setting. It uses Savage Worlds to do "heavy metal oriental action." Smashing together samurai, wuxia, steampunk, and mecha it creates an insane medley. There's a ton of great stuff and simple ideas here. The layout's clean and the art's excellent. I'm a sucker for weapon illustrations. The mechanics don't take up a huge amount of the book. Instead well over half covers the setting, concepts, and adventure hooks a GM needs to get things running. I can imagine running Iron Dynasty as is- or, if you were truly nuts, bringing some of these ideas over for something like a future L5R game. This is one of the few books that makes me sympathetic to the Ronin as a campaign concept. Here the old ways have begun to be smashed by the new machines and technology, and the Ronin stand as representatives of freedom and old values. It requires buying into the fantasy (and imagining a fairy-tale version of the society), but it could work. 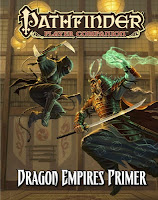 16. Dragon Empires
Dragon Empires is the Pathfinder setting bringing together various Asian Themes, not unlike L5R. It does appear that DE keeps those themes and influences a little more distinct . Pathfinder's Ultimate Combat supplement added the samurai and ninja classes which get a work-out here. I'd also say that the Chinese and wuxia influences are more front and center over L5R. The Dragon Empire has many nations, giving plenty of room for adventuring and a series of adventure paths associated with it. While that does expand the GM's options, it removes one of the strengths of L5R's set up: cohesive and deeply linked set of backgrounds with established relationships and a central code of behavior and society which joins everyone together.