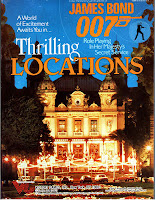 In the tradition of my earlier post about what was on my wishlist for GUMSHOE, (The GUMSHOE Companion: RPG Wishes), I present a list of five other rpg things I'd like to see created, done, or produced.

1. CHILLING CITIES
I really like Night’s Black Agents, and I look forward to running it. I like the globetrotting nature of the spy-genre- with the quick cut/wipe to a new exotic locale. The core book offers three cities done in brief (a page or so): Bucharest, London, and Tunis. One of the most useful old-school spy rpg supplements I owned was Thrilling Locations for the James Bond007 RPG. Pelgrane needs to do an updated version of that for NBA. They could pick a couple dozen cities from various continents, so that GMs could mix and match the travel plans of agents. Each city could be detailed with: map, basic cultural concepts, useful elements for creating the character of the city, local security and heat, places of interest for sexy spying, places of interest for horror and the awful, and perhaps one or two NPCs with hooks (done in The Armitage File's Stalwart, Sinister, Innocuous styles). Such a supplement could also be useful for other games like The Esoterrorists, Spycraft, Delta Green, and Conspiracy X. You could go rules/mechanics light. This kind of supplement would really push me to run a Night’s Black Agents campaign. I could supplement it with Wikipedia and travel guide info, to complement the game-focused ideas here.

2. THE G+ REVOLUTION
I suspect we’ll be seeing this soon, but I thought I’d put the idea out there. I would like to see a gaming publisher create and release G+ tools alongside their game system. This could be a character creator, turn tracker, rules reference, quickstart version, and reference sheet. Optionally if the game has some set maps or images, those could be offered in some way. This could be done in conjunction with Tabletop Forge and/or Roll20 for the easiest access or the company could build their own app. I play a good deal of face-to-face gaming, but I know anecdotally that this segment is increasing and will continue to. The first company that really takes control and presented value-added game material like this could gain some audience share. Or not, given the relative loyalty and fickleness of gamers. For my part, I know I would check these kinds of things out as they could make running a G+ game easier.

3. DUNGEON ARCHITECTURE DIGEST
Last night we took the bucket down into the depths of Undermountain, GM’d by the excellent Greg Christopher. And by depths, I mean the first level before we turned tail and ran. Let us say that Undermountain may not be the most structurally sound edifice ever created. There’s a problematic arrangement to the corridors, lack of smart through access for wandering monsters, and several zones which probably need serious reinforcement to avoid collapse. From the PC’s standpoint, at least one room could have done with a safety rail.
What I would like to see is a blog which provides an architectural critique to classic dungeon, castle, and ruin maps from modules. Places where the run of the corridors make no sense, areas without load-bearing supports, items on upper floors which don’t make any sense in the context of lower levels. For example, the pool on the upper levels which given the depth of the next level down ought to be leaking into the Kobold’s room. Questions of space, workplace safety, access, symmetry, and aesthetics could be considered in such a blog.

4. LIGHT WOLF
So White Wolf, as far as I can tell from the press release, is no more. That seems an odd choice, but clearly pitching away years of accumulated product identity and good will was a reasonable cost for actually gaining control of their properties. Beyond publishing plans for World of Darkness- New and Old- Onyx Wolf announced that they would be creating new editions of Exalted and Scion. These are two great settings with, at least for my group, problematic and dense systems. However the world background in each makes the games worth playing.

I’ve been running Scion with a FATE homebrew (you can see more on that here). It would be awesome if 'White Path' would consider publishing a “rules-light” version of each of these product in parallel with their core publication. They could keep the battle-wheel, ticks of time, detailed charms and whatnot for the base rules. But as well they could do a narrative focused approach which grinds down those rough edges. They could use their Storyteller Adventure System as a basis perhaps. Or more interestingly, they could do what other companies have begun to and create a sourcebook/version using another system like Savage Worlds or FATE. They could hook different market segments that way- perhaps offering a print core book reworked, and then online or pdf conversions for later supplements.

5. TRANSMISSION SUPPRESSED
I mentioned this before in my reviews of  Suppressed Transmission One and Two. I’ve been listening to Ken Hite and Robin Laws' awesome new podcast, Ken and Robin Talk About Stuff. It remains fun and focused across the four episodes so far. But it reminds me yet again that there’s no easy way for me to purchase the old Suppressed Transmission articles from Steve Jackson Games. I have both collections- and those are great, but they’re only a small portion of the larger body of work. The print/pdf books offer added value content in the form of annotations and those are awesome. But I don’t need those- I honestly would be happy with the articles themselves.

It seems the only existing option is to buy some of the electronic versions of back issues- but you can’t even get most of those since they were in the weekly online zine. I can’t understand why SJG can’t simply bundle the electronic versions of those articles together and sell them. They don’t need to do a full print version- and they don’t need to spend time on layout. I can’t imagine converting those to a collected pdf format would take many work hours. SJG could put together a quick pack, sell those and still have the option of doing and better and expanded version later. I think the phrase is “Shut up and take my money.” I just want access to those great articles again.
Posted by Lowell Francis at 3:15 PM