Raid on Innsmouth: The Miniatures Game 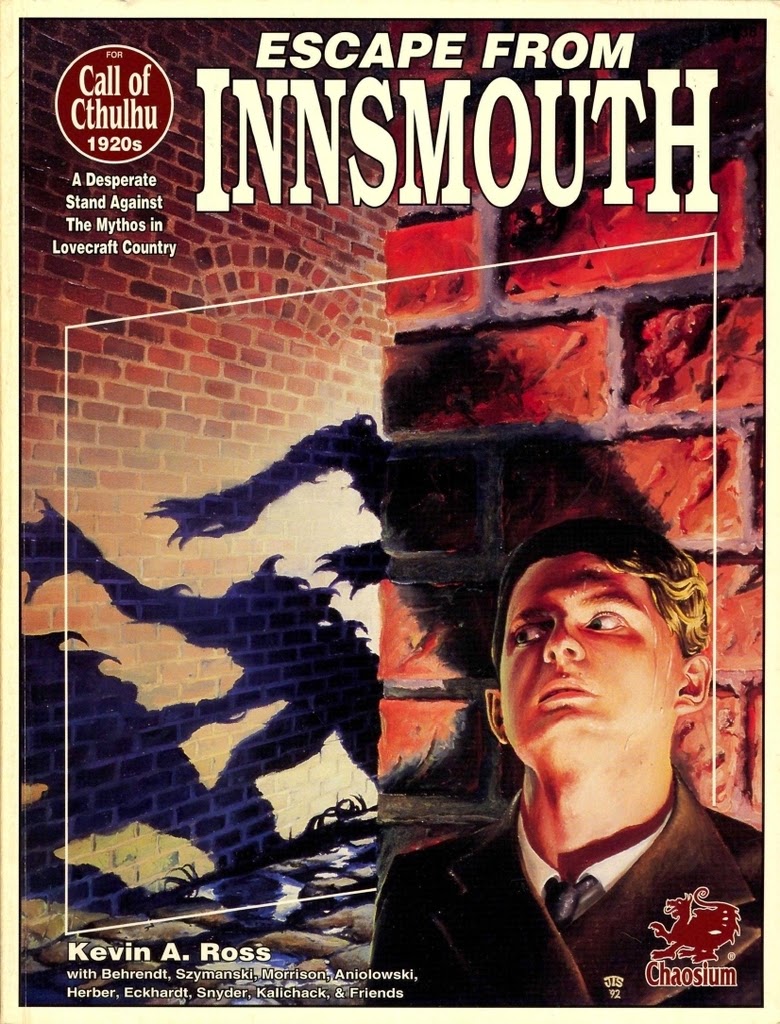 Sketches for a game I want to play, but don't think I'll ever have time to put together. I wrote this up a couple of years ago. I know we have Escape from Innsmouth the BG, but this is a little more about the later Federal Raid (with the assist of idiotic brave investigators).


J****- you were talking about how much money Cthulhu stuff makes on Kickstarter.

Here's an idea someone needs to do- a Cthulhu miniatures game, but with a very specific map and set up. The game includes a big Zombiecide-esque map- maybe modular, maybe printed on a roll. You do the Raid on Innsmouth.

Both sides get to tune their forces. The cultist/natives get to choose their cult, their magical resources, their traps in town, etc. The 'heroes' get to make up their forces- balanced between Feds and knowledgeable investigators. You need the later to deal with heavy problems and you need the former to actually deal with magic.

Event decks for each side- tuned to the factions chosen (ala Dropzone). Have a ticking clock ala Arkham Horror which puts pressure to finish the game. Decoy markers, special scenario rules, quick movement and fast resolution.

Get someone to do the minis and the money prints itself. Or if you're DiY'ing it, there's plenty of older decent CoC figures. I have about a dozen and a half Deep Ones from Grenadier and RAFM.

Skirmish level game- perhaps up to two dozen figures on either side. Standard figures should be moved in small squads (maybe 3 figures as a standard size for mooks and individual for characters.)

Ideally you want something which can be played in under two hours. You want it to be a little more boardgame like so average play time should be 90 minutes to two hours.

Innsmouth Natives: Locals, Deep Ones, Hybrids as mooks. Sorcerers, Elder Deep Ones, and High Cultists as the character types. They also use decoy discs for much of their movement and revelation. Need to have uninvolved citizens who can suck up hits, create distractions, cost points if they’re killed by the authorities. Depending on the scenario, there could be additional rules.

At the start of the game, players agree on a scenario. This sets the map and the basic details for the game (additional rules, cards, events, etc). However the Innsmouth Players then select a twist which modifies this and gives them additional rules, abilities, etc. This has a point cost for them- so they’ll have more or less points to spend on units, equipment, etc.

Each side has a command deck. Let’s say about 50% of that is standard for each game. But players can then tune that additionally with special cards based on a point cost. Some of these could connect to the scenario, some to troop types, etc. I like the idea of being able to play a card which modifies a particular unit in play- revealing that they’re actually something else. Equipment would also be shuffled into the deck, to pop up at special times. Cards which allow you to search the deck.

I was thinking that you want a fast and responsive game. So perhaps we modify the IGO/UGO structure of play. We want players to be able to take several actions when it is their turn, but perhaps not all of them. So here’s an idea, borrowed from the Decipher LotR CCG. Let’s say the Investigators go. They can take a number of actions up to the value of their Command Rating (or something else). Actions include moving, shooting, special actions, playing a command card, resolving a melee. The only mandatory action would be to resolve melees. No unit/figure can act more than once in this “round”

Might also need a mechanic for seizing the initiative- perhaps the # of actions choice passes somehow. Perhaps setbacks change this, perhaps they have to use a card.

Use d10s for rolling because they’re fun and give you more room to play with the design, but they’re not crazy wild like d20’s. Alternately unique eight-sided dice, but that’s kind of a waste of effort.

If it works, somewhere down the line you do the modern Delta Green version of things.
Posted by Lowell Francis at 9:34 AM