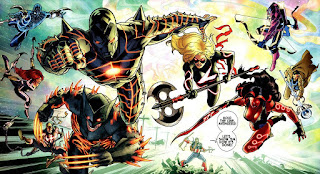 1. Super Saga
I’m thinking about a different kind of superhero campaign frame. Recently Rich Rogers has run a series of two-shot rpgs linked together by their locale: Gauntlet City. He had the players involved make up neighborhoods for it. When you play, you create a character from that part of the city. So far I’ve played Ninja Burger, InSpectres, and High Strung. I love the conceit of a shared world to connect online games.

Here’s what I was thinking: short-run superhero games, maybe four sessions. They would all be set in the same world, but using different systems. Some of the games might take place in the setting’s past. For example Cold Steel Wardens presents a kind of late ‘80’s/’90s pastiche which would be interesting to try. Rotted Capes or Base Raiders could be used for an awful future. Hero High or Masks could cover the youthful training of characters. I would probably use the same pre-gens across games and systems.

I want to try it for the chance to closely compare how these systems play. I could reasonably run Mutants & Masterminds, Champions, V&V, Marvel Heroic, Masks, Worlds in Peril, ICONS, or Venture City Stories, some with a little relearning. I could also try games I haven’t run or played like Cold Steel Wardens, Daring Comics, AMP, Valiant, Capes, With Great Power, and Capes, Cowls & Villains Foul. I think four sessions would be longer enogh to get a feeling for the game. It would also players to jump in and out. I’d have to see what kind of interest there is in online supers games. I might test those waters after Origins.

2. Gap Year
In the next few weeks, we’ll be returning to our Mutants & Masterminds campaign, or at least that setting. Last time I ran a “Year One” M&M campaign with newly emerging superheros and PC versions of existing comic characters. The team of Mister Miracle, Iron Man, Nightcrawler, Thor, and Mr. Freeze battled through three extensive campaign arcs and 50+ sessions. For this new one, they’ll be making up “legacy” characters (like Teen Titans, Young Avengers, Infinity Inc, and New Mutants). We’ll also be taking up about 18 months after the end of the last campaign.

To cover what’s happened in the meantime, we’ll be using Microscope. I've used it repeatedly for campaign and city creation, but never to cover between campaigns. I’ll bookend our timeline with the big event from the campaign climax as the first era (Vandal Savage’s Attempt to Turn the Earth into Apokolips Stopped). I’m still working on the title for the last era. Some of the players had written up character postscripts and I’ll try to keep those in continuity. But what we create at the table with trump that.. I’m a little nervous about how that will turn out. Doing this has meant holding off any serious planning until we do that collaboration. 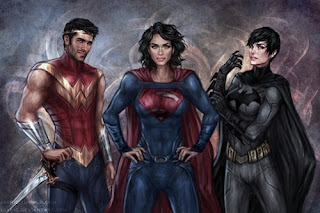 3. Masks & Worlds in Peril
I had a chance to play Masks a few weeks ago. I’d backed the Kickstarter but hadn't read the rules. It’s a PbtA game about teen superheroes. (If you’recurious Rich Rogers has been recording sessions of it). Sherri and I enjoyed the session. I liked how it pushes certain interactions, but also didn’t feel like it forced those. It has fun interplay, though like many of these games overly aggressive players cna undercut this.

It’s particularly interesting how vastly different it feels from Worlds in Peril, the other PbtA supers game. It’s not only that they take a vastly different approach to powers: sharply focused for archetypes vs. an anything goes toolkit. They have a different scope as well. Masks has a tone and specific genre everything’s aimed to support. On the other hand, Worlds in Peril wants to be like M&M, V&V, and Champions: a generic supers game useful for anything. You can see that in the player interaction elements. Worlds in Peril essentially has a Support/Hinder move and a generic approach to bonds. Masks, as befitting teen drama supers, has many moves about player interaction, social dominance, and leverage.

I’m beginning to realize how many PbtA games have a PvP element. Not directly battling, but muscling for control, pushing dramatic actions, and stepping into one another’s space. It adds to the tension by giving mechanics for resolution of those conflicts. Unlike video games which add PvP to make up for content, in Masks-type games it deepens things. Unlike the other PvP game I know—DramaSystem—it doesn’t necessarily reward players who “lose.” DramaSystem ends scenes by looking at who has narrative power and who gets a bennie for making concessions. Most PbtA games keep moving, without the need for this scene assessment.

4. Who Watches?
I’ve been thinking about that semi-PvP element and superhero gaming. Urban Shadows puts those rules front and center as well as the concept of factions. I wonder if you could do a gritty Iron Age supers game using those rules? I remember we played several Dark Champions, Watchmen-style campaigns in the ‘80s-‘90s. The PCs often had different agendas and ways of dealing with crime. That ended up more in the fiction than at the table. But it might be cool to figure out how to simulate such tensions. Imagine a Gotham-style city choked with clashing costumed vigilantes with allegiance to different power groups.

5. Choose Your Side
I’m cautiously optimistic about Captain America: Civil War. By the time you’re reading this you may have seen it (or skipped it if that’s your bag). I didn’t care for the original comic series and related event books. Civil War fails in the comics because of the extensive and entrenched history of the world. Characters behave irrationally, people forget events, and it weirdly feels out of tune. On the other hand, the movie has less of that baggage. We’ve seen the birth of the Marvel Universe and the cataclysmic events that might give rise to registration and control. It feels like it flows logically. But I think as a premise it works for a supers game (with some caveats).

A Civil War-style campaign arc would have to come early in a setting’s history. It could make a good first arc, with the PCs as new heroes in a world which has had superbeings for a relatively short period of time. It could also work as a great second arc, with events and decisions building off choices from the first. If the PCs' battles created collateral damage that could support a case for capital "C" control. Alternately, a “reset” setting could work. In Base Raiders all of the Alpha-heroes and villains have vanished. That shift might give governments the room and power to impose restrictions.

You’d want to talk about these issues with your players. How would they feel about it and what side would they fall on? You’d neeed to be clear about the terms. Is it just registration with secret identities put at risk for hacking or blackmail? Or is it some more serious control: government training and use? Players generally dislike authority, but I’d want to collaboratively figure out what we want to see at the table. Comic stories get to fudge things, but what are the limits? Do non-powered crusaders or gadget heroes count? Or is it just about powers? Is it based in fear of mutation- and if so how is that defined?

6. Villains Escape (Again)
I’ve seen super-prisons a couple of times in my games. You can see one in the Captain America: Civil War trailer (undersea as opposed to hyper-dimensional in the comics). I recall a multi-GM campaign where the players spent a long time helping design Eschaton, a superbeing prison for the Lunar surface. This came in response to a series of super-villain breakout scenarios. It had become ridiculous with the most recent prison happening to have villain equipment and costumes in an adjacent cell-block for easy access. In any case, it was Champions so we spent a ton of points on building the facility.

Then the GM who specialized in the jail-breaks waited until just after completion to activate a villain’s plan to release everyone we’d captured. At that point the other GM revealed that the prison hadn’t been built in space. It had been built undersea. All of this had been a lure and a ruse.

Have I missed any?
Posted by Lowell Francis at 3:54 PM