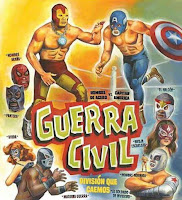 I want to suplex a werewolf.

That’s where this concept starts. If you’re down with that read on.

At Origins last year I bought World Wide Wrestling on Rich Rogers’ recommendation. I trust his opinion and had friends who I thought might get a kick out of it. I'm not a wrestling aficionado. I didn’t get around to reading it until a few weeks ago. And that’s (probably) the dumbest thing in this whole post. WWW is awesome. It took me a second read to get the shape of play, but it clicked for me when I did. Immediately I wanted to play it.

And of course I had an idea for super-complicated and over-the-top WWW campaign.

TONIGHT'S MAIN EVENT
We start with a regional Wrestling circuit travelling from town to town. They’re below the radar. You won’t find them on big broadcasts, but maybe Public Access or through hand-traded videos. Fans know them and kept up an active online community that basks in how low-rent they are. Somehow the organization keeps going year after year. A mysterious arranger sets up matches, recruits new talent, and dictates the general shape of battles. As with a conventional WWW game we have a mix of PC and NPCs wrestlers as well as other colorful figures.

After the match, the other half of the story begins. These wrestlers aren’t just coming to town for the competition. They’re here to deal out a Monster Beatdown. Or a beatdown to a monster. Mummies, Draculas, Mad Scientists, Time-Travelling Gorillas, Animated Voodoo Dolls. Whatever the problem they pin it down. The PCs know the score and have taken on this responsibility. They have to keep it a hidden- only a couple of others know (like the strangely effective nurse). They’re secret heroes, but perhaps not quiet ones. Sometimes their investigative activities cause complications for the Show, and they have to deal with anger from not-in-the-know management or other wrestlers.

The game alternates between a session of World Wide Wrestling and a session of Monster of the Week. Both are episodic so you can get a complete story done in a session. Here’s the brilliant suggestion Rich made. You split the GMing duties. One person handles World Wide Wrestling event while the other plays. Then they switch off for the monster hunt. Each GM has room to play off and build on threads crafted by the other.

Thoughts on the Story Side
1. Generally you’d have to accept a certain amount of cartoony-ness with this. The stories on the WWW side can be tough and deal with tensions between the characters. But you’d have to go with more unreality. Think closer to Hulk Hogan’s Rock n Wrestling than WCW Raw.

2. You could also say it’s a fairly Lucha Libre set-up. That blends absurdity with in-the-ring drama and character rivalries. You could go more fully down this route. Rather than standard wrestling the PCs are luchadore. In which case Lucha Libre Hero becomes a useful resource.

3. If you don’t do that, some of the fun would come from explaining why the wrestlers were wandering around in the graveyard at night with shovels and folding chairs.

4. On the Monster Hunting side things would be closer to Scooby Do, Goober & the Ghost Chasers, or any of those "travelling around solving mysteries" cartoons. See also the lightest episodes of Supernatural and "The Cautionary Tale of Numero Cinco" from Angel.

5. Maybe there’s a larger supernatural conspiracy- leading to a throw-down with the Biggest Bad. I like the idea of their being a rival wrestling company who seems involved with the darker side of things. They could be behind it, just muscle, enjoying the chaos, or even actually monsters. The PCs would have to have at least one match. Alternately they’re all part of a larger wrestling group with different “teams.” Their mysterious patron/benefactor might be a divinely inspired “Charlie” or Mr. Roarke.

6. At least one of the Monster of the Week sessions would have to end with a fight in the squared circle.

7. Keep the WW playbooks as they adapt the various MotW books to those. So the Jobber has a version for both games. Alternately, split it even more. The MotW characters have cartoony archetypes built: Leader, Brains, Face Man, Mechanic, Supernaturalist, Bait, Grizzled, Sneak, etc. Most of the weapon/attack elements get rewritten to be HtH. Trim and focus the new playbooks.

Thoughts on the System Side
1. Keep the WWW playbooks as they adapt the various MotW books to those. So the Jobber has a version for both games.

2. Alternately, split it even more. The MotW characters have cartoony archetypes built: Leader (Professional), New Kid (Mundane), Sneak (Crooked), Brains (Expert), Grizzled (Wronged). A few other archetypes come to mind: Face Man, Mechanic, Supernaturalist, Grizzled, etc. I’ll have to look at some of the alternate playbooks (including the Luchadore which was the first one I played in MotW). We'd reconfigure character and team questions.

3. Rewrite most of the weapon/attack elements to HtH. Players would add colorful names to any of their combat/attack moves. Maybe some improvised weapons elements. Trim and focus the adapted new playbooks. We don’t need everything there. Weird perhaps becomes Wrestling? Especially if you suggest players have secret techniques or magical masks. Have to figure that out.

4. One of the big conceits for Monster of the Week is figuring out the way to actually hurt the Big Bad. That might require special wrestling moves or at least those in combination with some elements or ritual.

What do you think? Other ideas or suggestions? What else could we add to this?
Posted by Lowell Francis at 2:32 PM