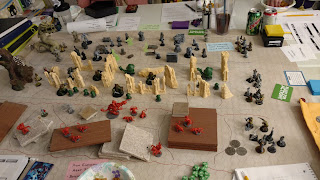 Just before Gen Con we had the final session of Guards of Abashan. As a face-to face -fantasy campaign, naturally we had an epic final session. In this case a massive battle for the PCs, supported by allies and friends they’d made throughout 2 ½ years of play. The conflict took place in three parallel realities. I used several tricks to make that work so I’m sharing those as a fight online you could drop into a campaign.

I’m sure others have run similar fights, so feel free to add other twists and suggestions.

BACKSTORY
You can connect this fight to any plot or location involving spatial distortions, parallel dimensions, or magical anomalies. In our game it came about as a result of tampering with time magics. In the lead up, the city the PCs guarded became fragmented, with different neighborhoods shifting to past eras. Even within that they could detect changes and strange alternate histories. Seeking the source led them to the Onyx Graveyard, a place they’d explored before. However when they got there, they found it wasn’t onyx, but jade. Even as they traverse it they saw different timelines and landscapes flicker around them.

As you might imagine they had to stop an eldritch ritual inside a fallen temple. When they entered the grand chamber, they beheld a host of enemies and the Big Bad at the far end. But even as they watched, that switched to a different, but similar chamber with other enemies and another version of the Big Bad. And then again once more it changed to a third before finally returning to the first one. The group pressed forward trying to coordinate their entry, but to no avail. As they entered, the shifting energies randomly transported them different battlefields. 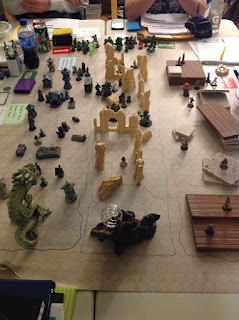 BATTLEFIELD
My version used minis and a map, but there’s no reason you couldn’t handle this more abstractly. I’ll come back to that.

For our Guards of Abashan session, I drew three long hallway-like battlefields on the mat. I used a different color for each, to make referencing them easier. In our game, it would have taken four or five rounds to move from one end to the other if they had straight, uninterrupted moves. I set up distinct terrain for each map as well-trying to make them as different as possible: great stone slabs & weird angles; a strange volcanic landscape; and finally overgrown ruins.

Each had a mass of foes towards the middle, a smaller reserve (including lieutenant or named foes), a Mid-Boss type foe and one of three versions of the Big Bad. I tried to coordinate the color of the map and terrain to the foes to reinforce the identification. Given the alternate realities, I reused enemies they killed earlier in the campaign. That heightened the stakes. Bottom line: all of this is an excuse to pull out lots of different adversaries, call back enemies, and use whatever terrain you have at hand.

If I wanted to do this with something like Dungeon World, I’d probably draw three boxes, each broken into a starting, middle, and end zone. If players wanted to press forward, headless of the enemies, they’d have to Defy Danger. But even then they’d still have the foes in their new zone. If you’re doing this online or have an erasable sheet, you can simply represent the PCs with a character name or symbol. You don’t have to get fancy. As well, each battlefield should have an environmental move or two to keep them distinct. 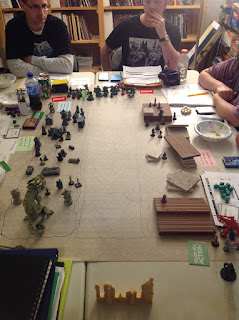 IN COMBAT
At the start of the fight, I distributed the PCs evenly but randomly across the battlefields’ entrances. I did the same for the NPCs they had with them. I wrote NPC names down on index cards and handed those to the players in the zone with them. Rather than run all the NPCs, player could chose to have them a) lock up minor foes (# depending on NPC power); b) fight foes (done with a quick resolution); c) aid a PC (granting them a benefit); or d) create an effect (depending on the NPCs powers). If they chose a) then the NPC would be safe and hold X enemies for the duration of the fight. If they chose any other option, then the NPC was on the table for me to injure or kill off.

The players had a goal: get to the Big Bad at the end. As they pushed forward, I activated the Lieutenants and Mid-Bosses to slow them. Several foes had ranged attacks, making just flying a risky proposition. The dimensional nature of the fight also made teleportation dangerous; if they’d done that I’d have randomized where they went: location and battlefield.

Which brings us to the interesting swerve. Players can accidentally trigger a switch of battlefield. In my campaign, the players have individual character decks. When they drew their “Play the Draw” card, they finished their action but then teleported to relatively the same spot on another battlefield. You could set this to a fumble, the use of some ability, a soft move, or something else. It helps mix things upIn our game those shifts created a complication in that the healers ended up away from those who needed healing. . Though I didn’t, you could easily have the NPCs shift randomly as well.

If players want to take the time to figure out a means to control their jumps from one battlefield to another, you might let them. My party was under the gun right from the start, so they didn’t.


That’s the bare-bones of it. We had a good time with this set up. I’m sure other GMs have done similar linked dimensional battles. If you have questions or suggestions, leave those in the comments.

Posted by Lowell Francis at 3:03 PM