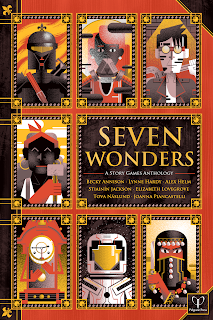 NEW TO ME
I ran twelve new games this year. That meant learning these well enough to manage at the table. How well I succeeded remains a matter of debate. I enjoy figuring out new games and calculating the minimum I need to know to not crash & burn. As with most of my rp work I’m trying to find the path of least work. Two of these games I ran as campaigns, a couple for conventions, but most are part of The Gauntlet Podcast’s TGIT Hangouts.

For that I’ve focused on running two Thursday sessions of “new to me” games. I put priority on with a sample adventure and/or pre-gens. If I see something new & cool come out, I’ll try to get that to the virtual table (hence City of Mist and Coriolis on my list). I’ll be running this series in 2017, starting with Feng Shui 2e, Chill 3e, and 7th Sea 2e. I don’t think I’ll double the number of new games I run in the coming year, but I’m going to try.

Before the Storm
One of the Seven Wonders anthology games I reviewed earlier this year. It’s GM-less, so moderated more than GM’d it, but it counts. Since I planned to take it to Gen Con, I ran one session for my home group. That gave me perspective teaching it. I ended up running just a single session of it for Games on Demand. It’s a good game. I love the premise: a group gathered on the last night before the final battle, dealing with all of their fears and feelings. This goes in my one-shot collection. Tangent: Before the Storm uses playing cards and I had a Dragon Age pack that really fit the setting.

City of Mist
Noir Mythic Superheroes Powered by the Apocalypse. I ran two sessions of this game while it was in Kickstarter. It had an excellent and complete quickstart packet. As a result I backed the project. I’m looking forward to seeing what the final release looks like. I wrote up my thoughts on the sessions here. We recorded two actual play videos (first and second). I talked about it on Episode 77 of the Gauntlet Podcast. 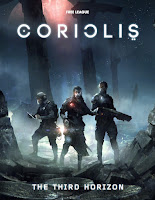 Coriolis
Another Kickstarter I backed. I took the plunge for two reasons: my experience with their other game, Mutant Year Zero, and the evocative setting. Coriolis describes itself as “Arabian Nights” in space. While I am a little nervous about potential Orientalism, the production and material looks good. It feels like Fading Suns done with another cultural template (i.e. not high medieval Europe). I ran two sessions from their excellent quickstart packet. I talked about my experience on The Gauntlet Podcast Episode 81. I’ve also posted the AP videos (session one, session two). The final book’s apparently at the printer so I hope I get it in the next couple of months.

Crowsmantle
My game and my first attempt to hack PbtA. In it grown-ups return to the secret fantasy world of their youths and find it changed. I tried to get closer to the simplicity of Worlds of Dungeons with this. I don’t think it worked, in part because we had a strong genre feel that I could have exploited. I made several mistakes: the first being how I structured the campaign. I’d do it differently next time. As for the mechanics, I needed more “build-your-own” move examples or handled it as I did with The Last Fleet. There players told me talents they wanted and I wrote those up. Despite all that I’m glad I ran it.I recorded the sessions and I’ve written a longer post about it. I talked about it on Episode 58 of The Gauntlet.

Cryptomancer
One of the best surprises of the year. As with Godbound, I went in unsure and came out ordering a hard copy. Cryptomancer’s tag line- fantasy hacking- intrigued me, but I’d been burned before. Miraculously it delivered that and more. I ran two sessions which we recorded (first and second). You can see my full write-up and review here. Long story short: if you’ve seen the game and had a spark of interest, it’s worth picking up.

Legacy: Life Among the Ruins
A post-apocalyptic PbtA game aimed different play level than most games. Players have a family (with moves) and a character (who has influence/control within that family). I ran three sessions, one for the character creation and two for play. There’s a lot to like here, but I’m not sure it holds together. We found it hard to shift between levels. I’ve thought about other approaches: starting much further away with the family level, but I’m not sure how to get to scenes between players. That’s where the fun is. Still I think Legacy’s a neat game and worth checking out if you have an interest in new takes on PbtA or community-based games. You can see my write up on that here and the two AP videos here (session 1, session 2). We talked about it on Episode 72 of The Gauntlet.

Mutant: Year Zero
So good. Mid-year we wrapped a fantasy campaign using Action Cards we’d begun in early 2014. I put four new games before the group: Mutant: Year Zero, Genlab: Alpha, Urban Shadows, and The Sprawl. MYZ won, though the other three tied in points. I wasn’t sure how it would go. We moved from game of high competency to one of serious struggle and danger. The players took to it- especially the tools for developing their Ark community. We’ve just finished session seven and we have one more left in the year. I’m enjoying it and the group seems to dig it as well. I like how the metaplot is rolling out and the society has evolved. We've talked about it a couple of times on The Gauntlet.

Mutants & Masterminds 3e
I switched over to M&M 3e from M&M 2e. I really liked 2nd edition, but I’d knew third had made interesting changes. It has, but I’m still not entirely sold on it. Or rather I feel like I struggle with the rules from time to time. Part of it comes from the crazily complex system of conditions, each with different mechanics and names. I like to keep things moving, so tracking conditions’ effects and recovery bugs me. Don’t get me wrong, 2e had lots of conditions. But this version uses those as the key building blocks so they’re everywhere.

On the plus side M&M 3e moved to universalizing result checks and modifiers. That simplifies but butts up against the conditions. M&M 3e also shifts to a completely effects defined system (ala Champions). Previously we had a mix of effects and pre-built powers. It was messy, but made pick up and play easier. Finally in retrospect I wish I’d had players tell me what they wanted and built the characters myself. Yet despite my uncertainties with the system, I’m digging the campaign. We used tools from Microscope and Masks to develop the world and the characters. That’s helped deepen things. 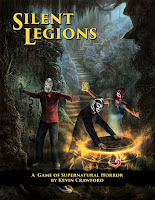 Silent Legions
I’ve only run one session of this OSR-style Lovecratfian investigation game. It has a simple system, the same one powering many of Kevin Crawford’s other releases (like the amazing Godbound). Because I dug the one-page Luchadores frame at the back I’m running that. But Silent Legions isn’t just a CoC-style investigation game. Instead it’s a toolbox for creating your own Mythos -- elder gods, aliens, cults, relics, tomes-- and using them in a sandbox horror game. It isn’t a Cthulhu game, instead it gives you amazing random generators to build something that feels like one. That means players will always be uncertain about what they’re facing. They have to learn the mythos themselves. Crawford smartly gives examples and walk-throughs for using the many table sets in his book. I’ve seen other collections of tables skip this. The examples help and pull everything together. Neat game worth buying for anyone doing horror.

Threadbare
I ran several sessions of this- both at Gen Con and home. I like the “Stitchpunk” premise of toys in a strangely post-apocalyptic landscape. The demo pack’s light on the setting or digging into the implications, so I’m looking forward to the final project. I backed this on Kickstarter before I’d even read the rules. It has a neat starting scenario (“Furry Road”) that made each session distinct. I will probably run this again.

Worlds in Peril
I’d played a couple of WiP sessions in a short-lived online campaign. We had a great GM and solid players, so that colored my memories. I wanted to run it since I’d finally GM’d some PbtA games and had my KS-backer hardcover sitting on the shelf. Worlds in Peril makes all powers abstract and a function of the fiction. That means a lot of wiggle room and discretion with their use. That’s combined with a broad set of moves and a condition system. Conditions track damage and can have additional effects- again depending on the GM’s discretion. It’s looser than City of Mist’s approach to that mechanic. I had a good time running WiP, but struggled. I’m not sure if that’s style, unfamiliarity with the mechanics, or my trad supers background interfering. Regardless, if you’re looking to play “comic book” superheroes with PbtA this works. I talked about our games on Episode 79 of The Gauntlet and recorded the AP sessions for YouTube (first and second).

World Wide Wrestling
MTV launched during my formative years. I watched more of it than any other TV channel. So I saw the “Rock-and-Wrestling” era begin with Cyndi Lauper and Hulk Hogan. And I hated it. That dislike stuck with me; I’ve avoided pro-wrestling. In the last few years my attitude has softened. Matt, from my M&M campaign, has contagious enthusiasm about wrestling. Plus many comic book blogs frequently went off on WWE PPV events and happenings. I picked up World Wide Wrestling on Rich Rogers’ recommendation and told Matt about it. He asked me to run it.

I wasn’t sure, so I played in a session Nathan Paoletta ran at Origins. It hooked me immediately. Even eliminated in the first round, I had a great time with my character. I came back home and ran it online and f2f- digging every session. It’s my game of the year. I talk about that on The Gauntlet’s Best Games of 2016 episode.

What Do I Want to Run in 2017?
A longer Coriolis game when it arrives. Godbound either online or f2f. Urban Shadows for my f2f group. Dragon Age or Cryptomancer, not sure which. Tianxia for someone, maybe just as a couple of sessions. Tales From the Loop for Sherri. More 7th Sea than just the two-shot I have scheduled. If I could figure out how to do Wrath of the Autarch, I’d consider that. I’d like to try a streamline approach to NBA, Ashen Stars and/or Mutant City Blues. They’re all good options.