Both Guns Blazing: Playing Feng Shui 2 (Part Two: Everything Else) 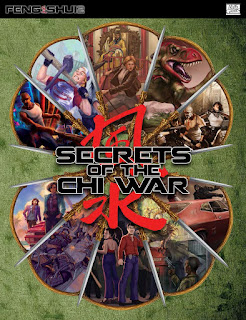 This is the second part of my consideration of Feng Shui 2. Part one here.

THE CONTEXT OF PLAY
I ran Feng Shui 2 online with Google Hangouts and Dice Stream. Since I didn’t need maps, I skipped Roll20. However Dice Stream wasn’t a perfect solution. Since you can’t color code the dice for positive & negative, we split that between the first and second die rolled. This worked OK until a die exploded, then you had to do some more visual tracking and math.

On my side of the screen I used the Sylvan Master app for Feng Shui 2 ($3-4 iirc). It’s pretty amazing with a complete collection of the archetypes, automated shot clock, die roller, and built in modules for several adventures, including the one at the back of the core book. I pulled that up, dropped in the characters, and chose the fights. It calculated the opposition automatically.

In theory that ought to be awesome. In practice it felt clunky. For one thing, Sylvan Master’s Apple app, so I had to run it on my hand-me-down iPad. It worked well, but that meant players couldn’t see the initiative tracker. That interfered with their sense of enemy numbers and hid the turn order. In turn that meant they couldn’t make choices based on that and weren’t sure how long it’d be in real time before they acted again.

That’s an execution issue on my part. But while Sylvan Master’s an amazing app, it has a couple of minor issues. Once I set up the PC group, I couldn’t find an easy or obvious way to remove someone. We lost a player between session one and two. Since the opposition’s keyed to the number of PCs, the fight became more deadly. About halfway through, I finally spotted how to drag characters down to the dead pool, listing them as KO’d. I ended up rebuilding the party between fights to eliminate the excess PC. Sylvan Master also lacks an undo function in certain places, particularly after resolving an attack. If I screwed something up, I couldn’t find an easy way to step back and fix it. My fat fingers got targets wrong, missed bonuses, and entered incorrect numbers. That snowballed quickly and I couldn’t rely on the values in the app after a few goof-ups on my part.

As I mentioned in the last post, if I ran it again online, I would use Roll20. There’s a custom Feng Shui set up for it. It doesn’t have Sylvan Master’s built-in archetypes or automaton. But it has character sheets to enter those in. You could have an image of the shot clock, with tokens for characters. Plus you could more easily display additional images. Most importantly, it has a built-in FS2 die roller.

That being said, I’d probably try running Feng Shui 2 again f2f first. There’s a certain delay you get running online that probably hurts Feng Shui’s momentum. You’d have the tactile benefit of actual dice, making explosions more interesting. It does have a double-edged sword with the Shot Clock. If you have a flat clock with tokens on it, those tokens have to be large enough to read at a distance. The whole thing has to be visible and within arm’s reach of the GM. On the other hand, you could have an upright clock. That’s the solution I used with Scion’s Battle Wheel: a steel sheet with magnetic tokens. But it still didn’t work great. If I stood it up facing the players, I had to reach around or turn it to change things. If I held it up from time to time, that got intrusive and meant players didn’t always see it. This would all be easier with Augmented Reality…

THE GOOD & THE BAD: QUICK HITS
A few short comments…


OTHER WORLDS
If we broadly define Feng Shui 2 as a “Hong Kong-Style Action Game across Multiple Genres,” then I can only think of a few other available games covering the same ground. On the one hand we have Hong Kong Action Theater. The second edition uses Tri-Stat. I don’t know it, having only looked at the wuxia supplement, Blue Dragon, White Tiger. On the other hand, there’s Action Movie World, a game which embraces the action movie meta-conceit (you’re playing actors playing characters in an action movie).

Outside of that your options get smaller. We have a number of Wuxia games, focusing just on classical rather than contemporary Asia: Dragon Lines, Qin, Dragon Pool, Legends of Wulin, Qin, etc). I’ve even tried my hand at a less than successful hack for this genre. Our other option would be generic: d20 Modern, HERO, GURPS, BRP, Savage Worlds, Fate. Of those, I’d probably lean towards the last two. I’m not conversant enough with SW to tell if they’ve got a HKA-esque setting out there.

As far as hacking it? I’m still not sure. I’d usually go to one of two systems for that: PbtA or Fate/Action Cards. The former could be useful if I want play out the emotional and melodramatic elements of Hong Kong action films. So maybe focus on conditions and bonds? But I’d also want visceral combat. That may be a little more difficult to hit. Single test resolution would be too fast; a Hit Point-based approach would need to be balanced. Fate’s a good option. Tainted Dingo suggested using Jadepunk’s approach. That’s not a bad idea. There’s also Tianxia, but that has a strong setting baked in and might be hard to adapt. Finally Michael Barford suggested hacking Lady Blackbird and now I’ve got that in my head.

GAME ON FIRE
I’m rambling on about this because there’s so much to love in Feng Shui. It makes me happy as I read through it: fun, flashy, cool, explodey. But the mechanics felt rough. I suspect if I steeled myself and ran it for several sessions, it would smooth out. It’s less a question of the game and more about how I approach things at the tabletop.

It’s also interesting to put this in the context of older games getting new editions: Feng Shui 2, Unknown Armies, Kult, Chill. How do they maintain continuity with the old game, while embracing new approaches? If you change core elements like the Shot Clock, then it wouldn’t be Feng Shui. At least I imagine that might be the reaction. On the other hand you have a revised game like 7th Sea which heavily retools the base mechanics and even some of the crucial setting conceits. It’s managed to do that and succeed.

I’ll be curious which roads other re-makes take...
Posted by Lowell Francis at 2:15 PM