Play Anything: Other Side of the Screen in 2016 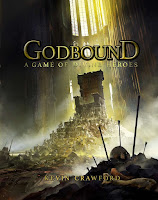 In 2016 I managed to play (not GM) more sessions in a single year than I have in at least a decade. I played more different games than I ever have in a year. I had 39 sessions spread over 21 games. Most offered solid experiences. At least one I have absolutely no memory of. I had the most sessions with Rolemaster (nine). It could/should have been more, but everyone’s schedules kept colliding. I present my list below, followed by some “awards” for the year. 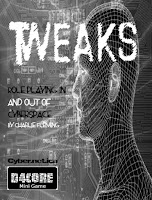 Game Where I Was Most Out of Sync with the Other Players at the Start
Tweaks
I had a character concept I thought fit with the setting. But I hadn’t listened well or really thought about the set-up. My guy ended up being incredibly difficult for the GM to hook in and I did no favors with my play. I had a lot of backstory in my head I didn’t get to the table, so I seemed more off than interesting. We fixed that for the second session, but I still feel crappy about that first one.

Game Which Made Me Immediately Order the Hard Cover
Godbound
I don’t know what I thought this’d be when I agreed to play. Maybe fantasy OSR with a couple of additional feats? Instead our characters had the awesome right out of the gate. Not in a power-gamer way, but more play at a different scale. It gave me most of what I wanted Exalted to be. The book itself compounded that. It has great material and amazing campaign generation tools. I hadn’t checked out Kevin Crawford’s work before. Godbound’s the pinnacle, but it got me to look at Scarlet Heroes, Stars Without Number, and eventually Silent Legions. Godbound’s great and if nothing else, you should download the free copy.

Game Where I Used the X-Card
Belly of the Beast
Rich offhandedly said they used teeth for currency. Nope. Welcome to my nightmares.

Game I Had Most Head Canon About
High Strung
I dug this game about garage bands trying to make good. In particular I liked my character. We had a pushy player in session one, but I finally got some serious spotlight in session two. It took us a long time to grok the mechanics, and even by the end I don’t think we had it completely right. I’d like to go back and maybe tweak this to how I had it in my head. A travelling band game’s one of my “White Whale” RPGs.

Game That Left Me Hungriest for More
Touch of Evil
This collaborative horror rpg has a weird and wonderful scene-framing structure. You move through stages with different structural effects and limitations in each. The designer said it needed several sessions to work. I can see that. You move along a road with branching choices. We only managed the first several steps.

Game I Thought I’d Hate, but Then Dug
1%er: The Outlaw Motorcycle Game
I’ve no desire to watch Sons of Anarchy. It has no appeal; the romanticizing bugs me. Even if things go bad for the characters, it offers more gloss than cautionary tale. But that’s my own hang up and tastes. I signed up for this because I wanted to play more Gauntlet City Limits (see below). Despite my reservations, I enjoyed both sessions. I loved the other players’ choices and moves. It had a great PC dynamic, but beyond that the system clicked. That surprised me.

Game Which Ended Up Being Very Different Than I Expected
The Sprawl
When I read The Sprawl, I got in my head a vision of a highly abstract mission game. Any particular scene resolved with a single roll. An operation would be a series of narrated obstacles. A single check settled any combat. Don’t ask me why I thought that. When we actually sat down to play I had a moment of cognitive dissonance. The Sprawl is abstract, in the PbtA mode. But it isn’t like- I don’t know- Kingdom or something. I enjoyed the sessions but it weirded me out a little. How could I so misread based on expectations. I went back and found that yes, The Sprawl is more granular than my imagined version. I want to run it now so I can see exactly how it works under the hood. 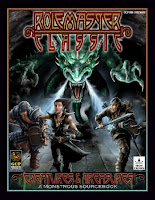 Game Where I One-Hit the Big Bad
Rolemaster
Let me tell you about my character. [insert long-winded description]. And then I rolled open-ended twice on the Large Creature Critical Table in the Magic Weapon Column. I got a 250+ and blew the giant sorcerous lobster apart!

Game with Best Action Sequence
Ninja Burger
I can’t really do it justice. But essentially our stealth food-delivery agents got called in to drop off an order in the middle of Die Hard. Awesome office-themed carnage.

Game That Wasn’t My Cup of Tea
Swords Without Master
Not sure exactly why. We had a couple of players I enjoyed and would play with again. But we also had one who kind of didn’t get it. And had the X-Card been on the table, I would have hit it a couple of times. The play felt fitful; stops and starts that didn’t hold together for me. I know many smart people dig this so I want to give it another try. Does my reaction come more from that session or the game itself?

Game with Most Engaged and Active Play
The Shab al-Hiri Roach at Hogwarts
I played this at GoD Gen Con. Every moment I felt energized and excited to see what came next. Great group who did a superb job of playing off one another. I hope I gave a good impression of myself. I had such a good time I fear I jumped in too often. But that may be my usual social anxiety. Anyway, a fun game with a satisfying story arc.

Game Made of Joy
Golden Sky Stories
I’d been wanting to try this out, but I hadn’t looked closely at what you actually did in play. Our role as animal spirits in a rural Japanese town surprised me. As did the conflict resolution approach. But the session sucked me in. We had an enthusiastic GM who kept things moving. It offered a great last game before we headed out from Origins on that Sunday. I’m still thinking about how to do a Harvest Moon hack for this.

Bonus: Cool Idea
Gauntlet City Limits
Rich Rogers created a “shared universe” city for his Tuesday night online games for The Gauntlet. Players in any session make up a neighborhood, building it up piece by piece. He’s run a bunch of games in this setting: ICONS, InSpectres, Don’t Rest Your Head, Cat, and more. It’s a smart approach that makes use of the medium. You have an episodic structure where players can drop in and out. But there’s a reward for those who play several games. They pick up on the references and connections. They can also bring in elements of their created neighborhood. A good thing that he’s continuing in 2017.

Any awesome, ambiguous, or absurd games you played in 2016?
Posted by Lowell Francis at 1:24 PM