PAM ALEXANDER
This week I interviewed Pam Alexander for The Gauntlet. Pam served as Lead Author for Dresden Files Accelerated. She worked with an amazing team of designers and authors including Morgan Ellis, Ed Turner, Leonard Balsera, Richard Bellingham, Clark Valentine and Brian Engard. I’ve already posted about how much I dig this new version of Fate Accelerated, despite not being a Dresdenverse aficionado. Other the other hand, Pam is an expert in all things Dresden, as you can hear in the podcast.

You can listen to the podcast here (or find it on iTunes). We’ve also been putting out parallel shows on YouTube, for those who use that as their listening service of choice. These are audio only, but they work for folks like me who listen to episodes via their PS4 on their TV.

DFAE IN THE WILD
I ran three sessions of Dresden Files Accelerated online for The Gauntlet. I’m also just starting a separate mini-campaign for the summer (shifting from Detroit to San Francisco). We posted the videos and got a good reaction, so I’m putting up those links. It’s a good way to see how DFAE operates, how I run Fate, and my mystery-building process.
SESSION ONE VIDEO

A couple of people asked me about my mysteries. How did I go about planning and managing the story in the three sessions? I’ve scanned my notes and put them in a single pdf. You can check that out here. Some notes on those notes:

Pages 1 & 2: These are all about establishing the structure and threats. I quickly wrote these after the first session. I’d ended on a cliffhanger that came to me in mid-game, so now I needed to figure out what that meant. I took the factions we’d established in character creation and fleshed them out just a little. I also added names to anchor the actors. I spent, at most, an hour on this right after the session.

Pages 3 & 4: The meat of the ideas. I did this prep just before session #2, and again tried to spend no more than an hour. I think about these things all week, but when I sit down to prep I keep myself to a maximum time. Usually it takes less. 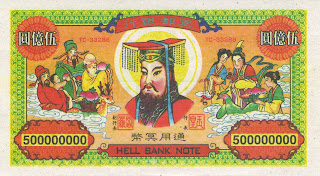 I knew we had a Hell missing. I started by figuring out Hardesty Cho, the manager, and why there was a Hell there. I wracked my brain to remember every goofy detail about these things from readings of the Inspector Chen Series, The Girl with the Ghost Eyes, and the Dark Kingdom of Jade supplements from Wraith the Oblivion. I recalled the Hell Money I’d gotten as a kid from Archie McPhee. I connected that with the real world fact that a major casino sat where Detroit's old Chinatown had been.

I fleshed that out with incidents and actors. I don’t give much detail, but I do make possible connections. I figure the players look into these people/places, leading them to the end point (which I figured would likely be the Casino, but could be Hell or somewhere else). You can see some of the specific leads on those pages and even some stuff we never got to (like who counterfeited the Hell Money).

Pages 5: I wrote this between sessions 2&3. I had the luxury of knowing exactly where they’d start, with the questioning of Koemi August. So I fleshed out her story and connections. Then I drew lines and added details to what I’d already built. Again, despite the sparsity, you can see concepts I never used.

Anyway, that’s usually how I build mysteries. Sometimes I stat things out as well, but usually I do that on the fly at the table (unless we’re playing a crunchier game like 13th Age or Mutants & Masterminds). 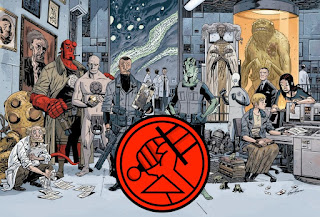 AUGUST IS THE MOST FATE-FUL MONTH
I’m running three different online Fate games in August for The Gauntlet. They’re up. Two are filled right now, but I have a seat in the third. We have Waitlists if you’re interested, so consider trying it. The sign-up system emails people when their status changes, so that’s cool.

It’s a rebuilding year for the Bureau for Paranormal Research and Defense. Accrued vacation time, maternity leave, and a brush with the apocalypse have left the team understaffed. That where you come in, a new team dedicated to stopping supernatural threats, beating some sense into the otherworldly, and generally keeping people from knowing too much. We’ll build characters based on submitted concepts. This game will use Atomic Robo, with the supernatural and tech as equally valid options.

GAUNTLET TGIT: BASE RAIDERS: SUPERPOWERED DUNGEON-CRAWLING
Two sessions of Base Raiders using Fate Core/FAE on the calendar for August

The world’s rich, multi-decade history of superheroics has ended. All of the potent and powerful vanished in the mysterious Ragnarok Incident. When those heroes, villains, and other weird beings vanished, they left behind bases- in some cases dozens of them. These marvels contain secrets, materials to scavenge, hi-tech toys, and the possibility of new powers. You play leftover supers- forgotten sidekicks, thrill seekers with .jury-rigged equipment, and minor-league mutants.

You’ve joined together to raid these bases for many reasons- finding lost loved ones, shutting down a dangers, discovering cures, locating new magics, or even finding vast quantities of filthy loot. You’ll have to fight past traps, failed experiments, and sentient guardians of all shapes and sizes. But you’ll have to act quietly or risk the attention of authorities or competitors. 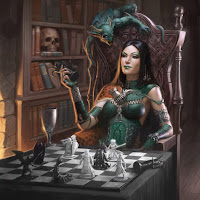 The Queen has passed, the throne lies vacant and the circling has begun. Your family is not the largest, the strongest, the most battle-hardened, nor the wealthiest, but you will seize this day using every weapon, resource, and stratagem at your disposal.

Players will collaboratively create a family hell-bent on taking control—for justice, honor, power, or something in-between. You will craft a member of that family, select a role and choose your skills and assets. We will do world building (places, faction, etc) and let you loose on the land. Between sets of scenes, we’ll resolve seasonal actions and see the fallout of events. Can you fight off noble houses, guilds, and secret orders all wishing for control? Or can you forge an alliance to serve your interests? And can you do this in the face of darker threats to the kingdom itself?

It is a cooperative game, but of course only one person can really sit upon the throne at the end...