Telling Tales from the Loop 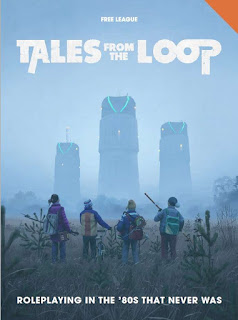 Should I love Tales from the Loop? I’m child of the 1980’s. I turned double digits as the decade began, so it includes my formative years, from grade to middle to high school to college. But I’ve never watched The Goonies, Explorers, or even finished Stranger Things on Netflix. I hadn’t given much thought to the “Bike Kids and Weird things” genre. But something about TftL hit me  and hit hard. Though I’d only run one session (and that only half an adventure) I took it with me to Origins for Games on Demand.

And yeah, now I love Tales from the Loop.

I dug it before, but each of the three times I ran Tales, I uncovered something new. I saw different player interactions, the kinds of stories it could tell, how cool a longer campaign would be, and how well the system supported everything.

In Tales you play 1980’s kids, 10 to 15 years old, dealing with the strangeness in your town. You’re friends and have a hideout. The Loop of the title is a massive supercollider project which seems to draw the weird to it. It encircles your hometown. It is and isn’t the 1980’s of our memory. Certain tech exists—autonomous robots, levitating industrial vehicles—but cell phones are still massive and people still drive Ford Sierras. The setting comes from a series of illustrations by  Simon Stålenhag.

Tales from the Loop spells out play six principles:


It uses the same d6 pool system as Free League’s previous rpgs Mutant: Year Zero and Coriolis, with a few changes. You still buy additional effects with extra successes, but those are even more spelled out. Damage has been simplified. Like Coriolis, it sticks with a uniform dice rather than splitting them by type. Here it makes sense to dispose of Gear Dice as a thing. Pushing for a reroll simply imposes one of the four possible conditions which in turn give a cumulative die penalty. All in all it’s smooth, simple, and easily explained. Even more than the earlier games, Tales from the Loop leans into indie, Fate, and PbtA-style play. It’s easy to adapt approaches from those. TftL abstracts some elements (like big confrontations, mystery arcs) even more than I usually do. 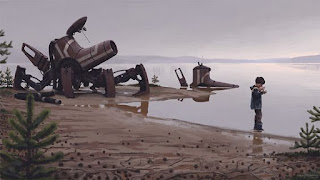 YOUR LOOP MAY VARY
The core book includes two settings, the original Swedish locale and one set in Boulder, CO. They do a nice job of providing alternate names to make the material interchangeable. A few things don’t quite work (American kids hanging out at the “kiosk” for example). But I grew up in the Midwest, so that’s what I know. I shifted the setting to Wayward, Ohio, a relatively rural city, boosted by the influx of money and attention from The Loop.

In my version, The Loop hasn’t been completed. Massive construction happens all around the city—drawing in workers, creating enormous dig sites, and suggesting a world that’s the changing. Wayward itself has boomed and expanded with the promise of the project. But it’s struggled with delays; many subdivisions and businesses stand empty or half-completed.

Despite The Loop’s incompleteness, it still affects the area. It draws in spies, grifters, saboteurs, mad scientists, and weirdos. More importantly the influence of The Loop reaches across time. It will be completed, so its paranormal effects can be felt in the past.

PRESENTING THE GAME
To present my new locale I reworked a Google map, clearing off labels and adding details. I used the names from my youth to make things easier to remember. While we didn’t use the map much at the table, it was nice to have. I also went through and reworked the character archetypes into “Playbooks” which include all the steps and choices of character creation on one sheet. I made some changes to terminology and names in a couple of places. I also put all of the game’s stated Principles on a sheet. On the reverse side, I listed the Top 25 singles for 1985-87 as well as a list of college radio bands. That gave a nice touchstone and several players appreciated it.

Though I didn’t really reference it at the table, I also made up a GM cheat sheet with a ton of lists and details. Some of the NPC relationships have cross-connections so I put those on there for reference. You can see that here. I also used the really nice cheat sheet someone put together online. I dig it, but I think you could cut that down significantly and increase the font size. As it stands, it makes the game look much more complicated than it actually is. 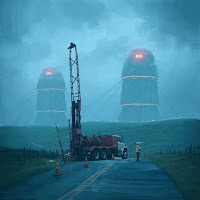 If you want to see the map, playbooks, GM cheat, or music list, I’ve put all thatin a Dropbox folder here.

Jason Cordova’s shown me the importance of setting out a game’s concept and theme at start. I told players we would spend the first hour or so doing characters, establishing connections, and answering my leading questions. After that we’d do a home scene, set up the mystery, and play that out. I mentioned our break and the fact that if we hit the last half hour, I might start compressing events to wrap things up. Before character creation I stressed that all the characters would be friends. Figuring out why can be a challenging, especially when you mix awkward and popular archetypes. I walked through walked through the six principles, and then had them pick archetypes.

The first session I skipped doing home scenes at the start and moved right to the mystery incident. I made a mistake there. In the latter two sessions I saw how strongly that framed the characters. I have to remember that for the future.

The high-tech elements show up in the pitch and book images, but it’s easy to forget about those. At least for the story I told, they served as a backdrop: one Hick had a robot hauler; another robot popped up in a mad scientist’s lab. I need to think about how to integrate those elements into play. The original art has a subtlety to it: a mixture of industrial design and everyday mundanity. I might bring that forward by printing out some of most relevant images and just having those on the table. They could point to the backdrop of automatons, flying freight vessels, and even dinosaurs. And they could do that without getting in the way of play.

THE MYSTERY
I wrote up my own scenario. Someone online mentioned they’d played one of the core book adventures as a demo at a con. I didn’t want to risk of putting something out there players had already read or experienced. I developed a basic inciting incident and a flexible set of directions they could go. I tried to leave the perpetrator(s) and cast open enough that I could slot in NPCs from their relationships. That worked decently, though I didn’t hit all of those NPCs in play. After the first session, I realized we didn’t need to have the players pick two NPC connections. That ended up being too much. For session 2 & 3, they picked one and I managed more references and appearances from that pool.

I don’t want to give away the mystery, since I might use it again. But I managed to have three completely different solutions and perpetrators for each session. Each came from the NPC picks from the session start. That made me pretty happy. 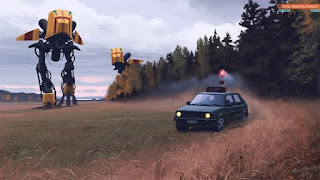 SOME PLAY THOUGHTS
In Trouble: If you have a Troublemaker, they will dramatically set the terms of play. I think that’s good and interesting. This archetype determines the limits of “bad behavior” and tense interactions with adults. They also usually drive or pressure the group as a whole. As a GM you’ll want to keep that in mind.

Skill Limits: Though Tales from the Loop only has twelve skills, they do require the GM stop to explain them. The Physical ones are self-explanatory (Force, Move, and Sneak). The Tech ones are a little odd. Tinker’s clear: build and repair machines. But Program and Calculate feel like they could overlap. The GM needs to define those limits. Program’s successes can be used to write computer programs, but the skill’s described as manipulating electronic devices. Just computers or something else? On the other hand, Calculate is “the ability to understand machines and other technical systems.” I almost think “Operate” might be a better term here. The GM needs to clarify those and convey that to the players. The Mind skills are clean- though you’ll still want to define what Investigate does vs. Empathize (human perception) and Comprehend (research). I think the latter should probably be call Research, Dig Up, or something similar.

Finally Heart has the skills that require the most explanation. Charm’s easy. That’s all soft forms of manipulation. Contact’s a little strange—it’s about knowing the right person to get something. So maybe to get access, an item, or a piece of info. How does that overlap with Investigate—could you sub one for the other? Finally Lead is one of the most useful skills, allowing players to bank successes and clear conditions. It really needs an individual shout-out. The rules leave one question open: does the lack of a “hard” social skill mean that kids can’t intimidate? Should you use Force for that? Maybe Lead?

Pressure: While it holds true in many games, I love the way Tales stresses that if you roll, something always happens. It suggests connecting failures and fallout to each character’s Problem. It definitely feels like GM Moves without saying as much. In some of the sessions I did a better job of hitting conditions and putting the pressure on. The existence of the Lead skill (which can clear these) and Anchors (NPCs you can have a scene with to recover) means I should be more aggressive. Since I don’t go to the dice that often, I reduce that pressure. That’s something I need to take into account. I also let the players use both Luck and Push to reroll the same roll, I have to check if that’s in the rules.

OVERALL
Anyway, I think Tales from the Loop is awesome. This hasn’t really been a review, I haven’t even talked about what’s in the book and how well put together it is. It has been immensely satisfying to run and its something I’m going to come back to again.
Posted by Lowell Francis at 1:14 PM