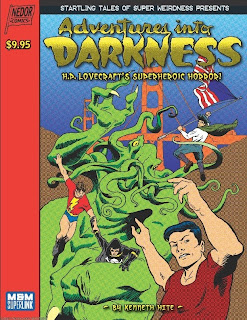 What Is It?
RPG sourcebook for Lovecraft's work in superhero comics

Huh?
Adventures into Darkness combines several things I love: alternate history, Lovecraft, superheroes, and odd niche game materials. Honestly it is such a strange product, you have to love it. I read the Mutants and Masterminds 2e version, but it is also published for HERO System (the version with the highest page count) and Truth and Justice. Hite describes the premise simply: "an RPG sourcebook from an alternate history, one where H.P. Lovecraft somehow survived long enough to write comic-book superheroes for Nedor Comics". Interestingly, Nedor Comics is a real publisher, whose characters have entered into the public domain. If you know comics you may recognize some of them from Alan Moore's Tom Strange and Terra Obscura. More recently Jim Krueger and Alex Ross have been working with the characters for Project: Superpowers from Dynamite Entertainment.

Kadath Mystery Theater
The sourcebook's laid out pretty simply: it opens with a little background that sets up how Lovecraft in this world became a comics writer. Essentially Randolph Carter serves as an entry point- a weird pulp adventurer whose adventures intersect with superhero-dom and expand the Nedor Universe. The six pages lay out this story completely. This section's filled with in-jokes about Lovecraft's history but more importantly, commentary on how Lovecraft's legacy ended up used by August Dereleth and others. Hite pokes a good deal of fun at Lovecraftian scholarship that take s a "high brow" approach. But the amazing thing is how plausible he makes all of this sound. He brings in enough of the real (Julius Schwartz's real world connection to HPL for example) to sustain belief. He has a clear grasp of fantastic fiction publishing in that era, as well as comic publishing of those times. As always, Hite creates a consistent and interesting interesting alternate history.

I love that it provides a strange, "artifact" approach to presenting alt history. Its an rpg sourcebok from an alternate universe. So you have a couple levels of defraction there. There's a Howard Waldrop story which presents an alternate old west where traveling scientist rainmakers battled against land barons for influence. But Waldrop doesn't tell that story directly. Instead he talks about movies made in the 1940's telling the stories of that period. But even that isn't told directly- instead that's explained in the form of clippings and interviews from film magazines about the movies about that period.

I Punch Cthulhu
The gist of the setting revolves around the addition of Lovecraftian concepts in the most pulpy and four-color fashion. So we get Nodens as an analog of Dr. Fate. Randolph Carter becomes the Dream Master. For villains, with have Asenath the Body Snatcher; Dagon; Yithian Agents; Keziah the Witch & Brown Jenkin; and even a version of Nyarlathotep. Each has a biography along with an associated stat block. The original Nedor Comics characters (The Fighting Yank, The Liberator, Mystico) are presented as well. They remain true to the original, but with some discussion of how Lovecraft and his crew of writers used them. All of it is very clever- especially interesting if you know something about the source, but funny on their own. That takes up about half the book- twenty four pages- with nice full color illustrations to complement most of the characters. I should mention the graphic design of the book- simple, useful and really carrying the tone of the times. There's an amusing full page "price guide" for these imaginary issues, which actually provides some plot ideas.

Applied Insanity
Hite spends seven pages talking about how one brings together the world of Lovecraft with superheroes. Its useful- ideas on how to make it fun while still keeping some of the original themes intact (from both sides). There's such weirdness already in this period of comics (especially if you've read anything like I Shall Destroy All The Civilized Planets!) it isn't too far of a stretch. Hite provides some nice tools, include mechanics for how one might apply sanity rules to MnM. If nothing else, these kinds of stories could make a change of pace from a normal supers game. It would be funny to have players travel back into what they imagine is a glorious Golden Age world of the past, only to discover their heroic ancestors battling these kinds of foes.

The final five pages of the book walk through Hite's logic in creating this setting and show how he connected things to the real world. He lays out the actual events and shows where they could have changed significantly. He even spins thing out a little further, suggesting that a career in the movies could have be a possibility as well. That's a nice touch and ties in tangentially to another Hite sourcebook, Shadows Over Filmland.

Overall
I enjoyed reading this book. I wouldn't necessarily run a campaign of it, but I might use some of the concepts presented here for a mini-series or as a side-arc in a longer game. But I think one of the real pleasures here comes from the reading of the book. People who hunt for well-written game ideas, who like Lovecraft, and/or have a fascination with comic book history will all find something to like here. The only other supers book I've read that comes close to building this kind of complete history would be another overlooked great book Omlevex. I'd recommend this for supers GMs with eclectic tastes especially.

Portability
The game stats here can easily be replicated in other superhero systems, as evidenced by the three flavors published. I'm not sure how useful this would be for another kind of game, unless you wanted to have this particular alt history (Lovecraft as comic book scribe) in that world.
Posted by Lowell Francis at 9:14 AM