RPG Supplements I Like: Suppressed Transmission: The First Broadcast 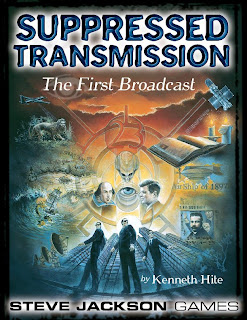 What Is It?
A collection of columns providing rich material for high weirdness in games.

Prepare for Transmission
Hite’s columns originally appeared in the print and then the electronic form of Pyramid Magazine. Hite worked on some of the more interesting and fringey GURPS products (Alternate Earths, Cabal) and well some magnificent recent products (Bookhounds of London, Adventures into Darkness, The Day After Ragnarok). He wrote about 301 columns, of which only 68 have been collected in the two volumes of these anthologies. Online, Hite had the ability to provide links, something lost in the print versions of the columns. I don’t think that a huge loss. In place of that, these collections bring together thematically-related material in five sections. He also provides extensive footnoting and commentary on the material in the sidebar. In this he manages to really make use of the classic widebar & sidebar design common to the SJG products. All of the articles are system agnostic- not stats or numbers. However Hite does tie particular ideas to certain games- suggesting how some of the ideas might be fit into those rules or that setting. Most often he references GURPS products, but that's mostly referring to the kind of genre they reflect. The materials still universally useful.

So What Are They?
Each column riffs on a topic-- be it a particular genre, a person, an event, an idea. He brings together many and disparate sources, showing the strange connections between them. His essay "Six Degree of Francis Bacon" (included in this collection) may be the archetype of that- showing how Bacon can be connected to any number of other plots, phenomena, conspiracies and high strangeness. Its amazing what he accomplishes in 3-4 pages each. Some columns give ideas for whole campaigns, while others can be used to inform the themes of a game. All of them are thought provoking, all of them showed me something new, and all of them are well-written. Hite's tour-guide voice carries him breezily through these pieces. They're universally fun.

The First Broadcast
This volume opens with an amusing introduction by John Tynes, an appropriate choice given his games. Hite then gives a short introduction and a preliminary column which serve to orient the reader a little to the method of the material. He points at his favorite themes and uses the example of a book he's recently read to show how he works. The articles chosen for the volume represent a cross-section of the original pieces and fall in a different order. Hite provides notes for each indicating where they fall relative to one another- for those so inclined to read them that way. Perhaps that a Dictionary of the Khazars approach? The body of Suppressed Transmission breaks into five sections, each with a theme. I'm going to walk through those sections, but I don't want to give away too much about the material. There's real pleasure to uncovering this yourself. Instead, I'll general describe the section, give a list of "keywords" drawn from the articles, and then talk about a single representative essay.

This section contains a piece from one of my favorite series, "Clio’s Nightmares." Each Halloween Hite produced an essay providing alternate-history horror-fantasy seed. This one includes a Clive Barker meets I, Claudius concept I desperately want to steal for a Cthulhu Invictus game. But the best example of the kind of work Hite does comes in "Six Flags Over Roswell." Here he shows how taking one piece of strangeness and dropping it into another setting can be used to generate whole new plots and frames. In this case the aliens crash in very different times. 7/4/1591: Spanish Swashbucklers forced to deal with a Grey Conspiracy brought back to the Old World after the Jesuits overcomes strange wreckage and survivors. 7/4/1827: Texas colonists battle against a alien empowered Santa Ana declaring himself to be "Queztzalcoatl, Returned God-Emperor of the Americas." 7/4/1837: Texans harness a new power, half steam and half anti-matter leading to a new struggle for control. 7/4/1861: The CSA finds allies in the form of Martians and their three-legged war-machines bearing heat beams. 7/4/1881: The Ghost Dance of the Indians activates and drives the alien nanoassemblers, creating a dream made reality. 7/4/1947: Truman's assassination leads to full exposure for Majestic 12 and the Roswell cover-up. Some of those concepts have more appeal to me than others, but any of them could be the start of a solid long or short campaign.

High Weirdness: Fun with Phenomena
Considers weird things and how they intersect with the other weirdness of the world.

There's a great deal to love in this section, especially where Hite takes apart Shakespeare as a source of weird gaming. But equally interesting is "Digging Up Weirdness" where Hite riffs on the idea of archaeologists as PCs & NPCs, and on the nature of archeological expeditions as a source of adventure. He gives two example of real-world ancient explorers, useful as models for these kinds of character sin other games. He mentions the Bone Wars as a setting for Western adventures (an episode in history best covered in Zander Cannon and Jim Ottaviani's Bone Sharps, Cowboys, and Thunder Lizards). But I really love the idea of the Black-OP archeological team- trained to intercept and interfere in discoveries. They could be a little like the team from Warehouse 13 or perhaps even agents of Time & Temp trying to keep evidence of their actions to a minimum.

High Weirdoes: Villains, Vagrants and Venusians
As you might guess, here traces the path of certain characters- specific of of a type.

There's a great section giving a guide to all of the "Ultraterrestrials" of history. Hite manages to pull together all of the various legends and rumors into a coherent bunch. There's the feeling throughout that he could take all of that, rearrange it and come back with an equally entertaining and plausible story. But the essay that stands out for me in this section is "Travelin’ Man: Sir John Mandeville." I consider myself fairly well-read and a guy who seeks out obscure details and history, but I'd never heard of Mandeville until I read this. I knew some of the things Hite brought to bear on this mini-bio and overview (Prester John for example). But most of this I had no idea about; Hite manages in the piece to teach me enough to feel comfortable with the ideas, tantalize me with other threads to follow, and give me a dozen ideas about how these things might fit into several kinds of campaigns.

Highly Significant Weirdness: Clashing Symbols
This section deals with a particular symbol or idea and considers how it might be connected to the strange.

I love the essay on Chess. In a kind of inverse of the Mandeville essay of the previous section, I had a sense of the history involved but he drew lines between it and other things I hadn't considered. But the essay I've actually used heavily is "Red, White, and Real: Coca-Cola." Hite considers all of the history and mythology around this beverage, and especially its role as a symbol for a certain kind of consumerism and progress. He draws alchemical connections and cultural comparisons, with the idea of the magic drink or elixir. But its his last throw-away bit where he links the green-glass bottle of Coke to the Holy Grail that I used. That became the focus point of a major arc in my Unknown Armies campaign. I love that detail and this essay as a whole.

Highly Theoretical Weirdness
I think it would be fair to say this is Hite's catch-all section, dealing with the meta-level of some concepts and applying others from earlier sections in new ways.

This section contains the essay on Francis Bacon, a font of high weirdness, I mentioned earlier. But this also includes "Metro Section Baghdad." This column shows readers how any city can serve as a rich and unique source of role-playing seeds. Hite walks through an assortment headlines from one edition of the LA Times. For each he riffs on how that idea could be recast and twisted to form the basis for a game. There's a real sense of empowerment which comes from watching a master do a trick, close up and showing you how you could do the same thing.

After this section Hite provides his top ten list of major books to read for an introduction to High Weirdness (Foucault's Pendulum; The Books of Charles Fort; Holy Blood, Holy Grail; and so on). There's a sidebar with additional books mentioned as well. There's a further list of other sources and readings and then...an index! And not just a little index, but a two-page deep and thorough one. Its surprising to see that in this kind of book but thumbs up again for the utility of this book.

Overall
Suppressed Transmission presents highly readable and informative essays on the whole universe of strangeness which intersects with the kinds of obscure and geeky knowledge role-players often have. Hite snares that material and presents it in a playable form: playable both in the sense of useful for games but also for the mental play of thinking about new and interesting things. I highly recommend it for any GM interested in games with mystery, conspiracy, weirdness, twists, history, horror, fantasy. In short, I think any GM would benefit from it and players may find themselves inspired as well.

Why the Rest Need to be Reprinted
For a long time I had an electronic subscription to Pyramid Magazine. Each week a new issue would appear, IIRC on Fridays. Honestly, that would make my whole day. There were a couple of other columns I enjoyed, but Hite’s stuff invariably set off in my head a thousand ideas- plots for current games, connections between things I hadn’t seen before, and seeds for entirely new campaigns. If there’s any drawback to the material here, its that there’s almost too much good stuff. It would be nearly impossible to process even a significant portion of it into your gaming life. But as a mine for the diamonds which would slot just right into your campaign, these columns are invaluable. SJ Games still hasn’t put together collections of the rest of these columns. Some of them can be found by purchasing individual electronic issues, but I’m not keen on that. One excuses I’ve heard is that editing and production for these would be cost-prohibitive with the new focus on SJ primarily on BGs and GURPS. While I think the ST format is great, with exceptional value-added through the commentary, I’d just like to have the columns as they were. I would buy a basic pdf or POD product that brought those together. I’d even consider an iTunes approach if I could buy the columns individually.
Posted by Lowell Francis at 1:19 PM