Suppressed Transmission: The Second Broadcast : RPG Supplements I Like 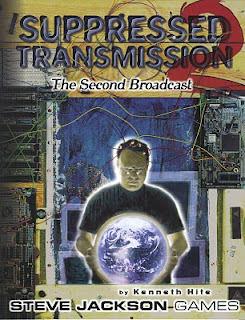 What Is It?
A second collection of columns providing rich material for high weirdness in games.

This is the second, and as of this writing, last volume in this series. You can find my review for the first volume here. Since both share some structural features, I've duplicated some of the preliminary and closing material between the two reviews. This review wraps up "Conspiracy Week" here at the blog. Remember: Live Every Week Like It's Conspiracy Week.

Prepare for Transmission
Kennth Hite’s columns originally appeared in the print and then electronic form of Pyramid. Hite worked on some of the most interesting and fringey GURPS products (Weird War II, Horror) and well magnificent recent products (Grim War, Trail of Cthulhu, Dubious Shards). He wrote about 301 columns, of which only 68 have been collected in the two volumes of these anthologies. Online, Hite had the ability to provide links, something lost in the print versions of the columns. I don’t think that a huge loss. In place of that, these collections bring together thematically-related material in five sections. He also provides extensive footnoting and commentary on the material in the sidebar. In this he manages to really make use of the classic widebar & sidebar design common to the SJG products. All of the articles are system agnostic- no stats or numbers. However Hite does tie particular ideas to certain games- suggesting how some of the ideas might be fit into those rules or that setting. Most often he references GURPS products, but that's mostly referring to the kind of genre they reflect. The materials still universally useful.

So What Are They?
Each column riffs on a topic-- be it a particular genre, a person, an event, an idea. He brings together many and disparate sources, showing the strange connections between them. In one approach, he takes a concept and shows the many different "readings" one can put to it. His essay "Jacks Wild: Six Stabs at the Ripper" (included in this collection) takes this approach. It's amazing what he accomplishes in 3-4 pages each. Some columns give ideas for whole campaigns, while others can be used to inform the themes of a game. All of them are thought provoking, all of them showed me something new, and all of them are well-written. Hite's tour-guide voice carries him breezily through these pieces. They're universally fun.

The Second Broadcast
This volume opens short, goofy poem by John M. Ford (author of the legendary Paranoia module The Yellow Clearance Black Box Blues). Hite provides a quick two-page introduction which lays out his approach and structure. The articles chosen for the volume represent a cross-section of the original pieces and fall in a different order. Hite offers notes for each indicating where they fall relative to one another- for those so inclined to read them that way. Perhaps that a Dictionary of the Khazars approach? The body of Suppressed Transmission: the Second Broadcast breaks into five sections, each with a theme. I'm going to walk through those sections, but I don't want to give away too much about the material. There's real pleasure to uncovering this yourself. Instead, I'll general describe the section, give a list of "keywords" drawn from the articles, and then talk about a single representative essay.

Design
I didn't talk about this in my review of ST: the First Broadcast, in part because I was working from a pdf version. I'd originally encountered the ST articles online, using a simple and clean text design, with the occasional image thrown in. Hite extensively hyperlinked his references. The printed version for The Second Broadcast reveals the one problem I have with these anthologies: the graphic design. In a word it is busy. That's something I can usually handle and I think it reflects the subject matter. But there's comes a point in reading through this volume that I felt overwhelmed. The book itself is design like a GURPS 3e supplement-- with thicker paper and binding which means that you have to be careful not to split the spine- in turn a problem since you need to open the book wide to read everything. Some of these SJ Games books had softer binding and the ability to open wider, which would be a welcome change for this.

Hite has a great articles considering how supers might fit into the cultural histories of a number of civilizations. I've talked about that idea of supers out of time before. But I also love his piece "Shades of Black: Alternate Black Ops." He takes the idea of the agency dedicated to fight against the strange and transports it to a variety of settings. My oft-planned, but not yet implemented Hellboy Ancient Rome campaign comes in great part from reading this years ago. He gives several versions. The Black Bards protect mankind from the Fae...

...which now that I think about it would be something great to bring up into a modern Changeling the Lost group. Humans armed with some talents who have watched the Keepers evolve and who have fought against them. Some see the Changelings themselves as victims, others as adversaries. It wouldn't exactly be a Hunter set of NPCs, but could be a lens to show the players the historical reading on these events...And see this is how Hite's stuff works. I was just skimming through again and these ideas popped up. Suppressed Transmission is the ultimate idea-generating book for any kind of campaign.

Back to what I was saying, The Black Order watches the world of the Crusades for any sign of strange magicks (this recent Ironclad movie, perhaps?). Queen Elizabeth's Black Operatives of the School of Night secure the Caribbean for Queen and Country. The swashbuckling operatives of the Black League moving in the shadows of Paris. The Black Marshalls fight back the menace of Grey influence on the Civil War.

Everyone loves the Templars, and Hite starts with a great essay looking at how they might be worked into the secret history of America. He also takes at look at another staple of weirdness in "Crypto***Icon: The Voynich Manuscript." That's such a fixture of strangeness and he does a great job providing enough background and history for someone new to the concept. In that regard, he gives a GM enough material to have them throw the concept out at the table and have it feel right. He also points at a number of useful secondary sources, with some idea of their take on the object. But as you might expect he also provide a a number of "explanations" which could be used- including the idea of the text as a thing without an explanation.

A few years ago, Erik Larson's The Devil in the White City: Murder, Magic, and Madness at the Fair that Changed America hit the best-seller lists. Despite being well-written, it disappointed me because I'd already gotten all of the interesting details on H.H. Holmes from the Hite essay which appears here. Likewise a few years ago I bought the Jeanne d'Arc, an SRPG for the Sony PSP. It has you playing a version of Joan of Arc in a fantasy setting. Mind you, one member of your company is Gilles de Rais. That's especially freaky because I read Hite's essay on him "The Maiden and the Monster: Joan of Arc and Gilles de Rais." If you don't know the story, bottom line: guy was nuts. Hite takes the various horrible details of his life and weaves some explanations of his relation with Joan, his later murders, and his strange lineage together with witchcraft, folklore and high strangeness- providing rich material for GMs to smother their players with.

One of the earliest non-Chaosium modules I recall was one called Glozel Est Authentique!. It had an amateur press look to it, so I never really looked at it. I regret not buying it, having read now Hite's essay on the history and pregnant possibilities of the Glozels. Likewise, the City of Irem, referenced in a variety of fantastic fictions, serves as the meeting point of many possibilities. In "City in Dust: Many Columned Irem" gives a rundown of the sources and appearances for this legendary city. He also offers a number of ways in which Irem or like cities can be used in a campaign. His connection of the idea of Irem to a dozen other kinds of weird really stands out in this piece.

The goofiness of characters like Foxbat from the Champions Universe has been with us since the beginning of gaming: bad puns, goofy plots and insanity. Hite has a nice piece considering the many uses and potential misuses of the idea of April Fool's Day in a game. But I'm more taken by another article in this section. One of the Geeklists I have on my plate to do eventually will be one which looks at games which have dead PCs. Hite's article "Things to Do in Gaming When You're Dead" will take center-stage. He looks at a variety of afterlives and sets up ideas of how the mythic might be brought to bear on that phase of a PC's existence. Some of it echoes the concept of Heroquesting from Glorantha, and I can certainly imagine a campaign which would turn halfway through to become that. Anime as a genre does that mid-season switch well-- and think about how you might do a Bleach style game. Just a thought...

Overall
Just like the first volume, Suppressed Transmission: the Second Broadcast, presents highly readable and informative essays on the whole universe of strangeness which intersects with the kinds of obscure and geeky knowledge role-players often have. Hite snares that material and presents it in a playable form: playable both in the sense of useful for games but also for the mental play of thinking about new and interesting things. I highly recommend it for any GM interested in games with mystery, conspiracy, weirdness, twists, history, horror, fantasy. In short, I think any GM would benefit from it and players may find themselves inspired as well. The first volume might be a little more accessible, but literally only for Hite's introductory column in that one. Otherwise, they both present equally dynamite material.

Why the Rest need to be Reprinted
For a long time I had an electronic subscription to Pyramid magazine. Each week a new issue would appear, IIRC on Fridays. Honestly, that would make my whole day. There were a couple of other columns I enjoyed, but Hite’s stuff invariably set off in my head a thousand ideas- plots for current games, connections between things I hadn’t seen before, and seeds for entirely new campaigns. If there’s any drawback to the material here, its that there’s almost too much good stuff. It would be nearly impossible to process even a significant portion of it into your gaming life. But as a mine for the diamonds which would slot just right into your campaign, these columns are invaluable. SJ Games still hasn’t put together collections of the rest of these columns. Some of them can be found by purchasing individual electronic issues, but I’m not keen on that. One excuses I’ve heard is that editing and production for these would be cost-prohibitive with the new focus on SJ primarily on BGs and GURPS. While I think the ST format is great, with exceptional value-added through the commentary, I’d just like to have the columns as they were. I would buy a basic pdf or POD product that brought those together. I’d even consider an iTunes approach if I could buy the columns individually.
Posted by Lowell Francis at 10:39 AM