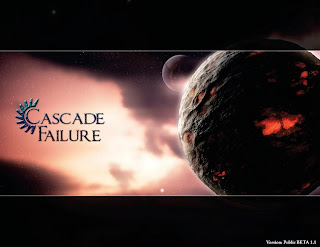 What Is It?
A far-future post-apocalypse interstellar sci-fi game.

Introduction
I've entered a lot of items into the RPG Geek database. I have a fondness for that kind of crunchy, mindless work as a break between tasks. One of the things I do is cruise through the various new rpgs offerings on RPGNOW. If I haven't heard of something, I follow it back. Sometimes I find and can put in obscure stuff in. Sometimes it is amzing- that’s how I stumbled on the stuff from Flying Mice Games like On Her Majesty's Arcane Service and In Harm's Way. Sometimes, however, it can be depressing. When you find a product which the author seems to have taken no care with. And I don’t mean illustrations- those can be hard to find and some people have done much layout, so I have some forgiveness on that score. But when I read something that has a blurb that gives the reader no idea what it is, when I look at the introduction and there’s even less of it and the whole thing reads like someone output the contents of the 7th Grade game notes...I have to wonder if they’ve ever actually looked at a game. Thankfully those moments are the rare extreme...and sometimes the absolute opposite happens.

Dark Horse Game Design
I was going through group image moderation process (geekmod) on RPG Geek, when I spotted a set of covers pass through a few weeks back. I hadn’t seen them before and the covers looked intriguing. One of them, Statecraft, seemed like it might fit into my list on games covering communities and societies. So I looked at the entry and tracked it back to this website. I figured I’d find a preview and perhaps, if it looked good, I’d order a copy. Then I realized that the author had put the whole of that game in a beta version up for free on his site. And not just that one, but several others. And what he calls beta, I’d call amazingly high quality production.

Greg Christopher’s games are currently available as free pdfs. Now in your head you might be going- "oh, they’re free pdfs." Let me make this clear- they are brilliant pieces, better looking than a lot, if not most of the small-press for profit rpg publishers you can find on pdf sales sites. And I don’t mean that as a knock against them, but rather a statement about the high quality of this. In the case of Cascade failure, we have a 88 page (landscape, two page columns)full-color and heavily illustrated piece. The layout’s excellent and the artwork is dynamite. Christopher’s commissioned work from artists- it is some of my favorite sci-fi art. If I have any real criticism on this front, it is that the game is generally well written and a good, sure-handed editor could take it up to the next level. Though you wouldn't know it from my writing, I've worked as an editor. I found myself hitting a few places where I thought "this could be even better if....". That being said, the writing's in most places well above other products of its kind I have seen.

Premise
Cascade Failure presents a stand-alone and complete rpg. The premise is a future interstellar society hs been rocked by a massive war. Though brief, that war killed off great numbers and more importantly destroyed a great deal of the societal infrastructure. That destruction has a ripple effect- the cascade failure of the title. Transport and communication broke down, trade and commerce halted and societies who had been absolutely dependent on resources from those systems collapsed as well, setting off further chains. In the end 95% of all humans and 60+% of alien species die in the fallout from the great War. Planetary societies decay and revert or die out.

The game takes up in the far aftermath of those events. Few remain who remember the actual events of those days. Some planets and systems have managed to rebuild slightly, or have sustained themselves at a considerably lower level. Now some have begun to travel out into the "wilderness" of space. They might be explorers, they might be searching for something their people needs to survive or they might have other reasons. The PCs take up those roles. It is a classic motif- with the group heading out into the dangerous and untamed lands. In some ways, it feels like a mash-up of all the classic old-school games. Imagine throwing D&D, Boot Hill, Gamma World and Star Frontiers together. It’s a pitchable setting and a compelling idea with a lot of room for the GM to build to their ideas.

Disclaimer
I generally pick up rpg materials to look at what I can borrow adventure, hook, character, setting and story-wise. I look at the mechanics to see if they have interesting ideas to borrow for our homebrews or if they’re novel enough for an experimental play (Dread, Time & Temp and Fiasco all fall in this category). I just want that up front before I run through the mechanics presented here.

The Game Itself
Cascade Failure offers a complete rpg system. It feels very Old-School to me- interesting details, complete resolution that doesn’t shout about being complete, lines and paths for the PCs which remain open enough that the players can pin an interesting story on their concept. The game makes of point of defining proactive responses (governed by attributes and skills) and reactive responses (governed by saving throws) for player choices.

After the three pages of setting and system set-up, the game moves into Character Creation (opening with a nice, clean checklist). Characters have the classic six attributes (Str, Dex, etc) rolled using a 3d6 method with options for too low total rolls. Players assign those rolls. Players then choose a species from the six possible (including human). Each has certain advantages and limits (such as an EXP penalty). These are nicely defined on a page each with superb illustrations. Next players choose a class from the eight possible (Empath, Solider, Outlaw, etc). These provide Hit Dice, Class Skills, Saves, Money, Special Abilities and so on. As with the species, Christopher does a nice top presenting them and making them equally attractive. After figuring out the effects of class choices, players choose ambitions- an interesting detail, but without a mechanical function. On the other hand, players also assign points to "impulses" which do have some mechanics behind them. Players split seven points among Consensus, Adherence, and Efficiency. The GM may then use those as a bonus or penalty during play when the situation reflects that morality. It isn’t a "compel" system but does offer some legislated morality to the game. The player gets to choose, however. It reminds me of the Virtues systems from Exalted, Pendragon and Ars Magica, but handled in an even more efficient and streamlined way. Character creation finishes with other details (armor class, HP, exp and levels and so on). This whole section takes up a little under thirty pages.

Weapons and Armor come next, ten pages with a variety of PC-classic items. The equipment is presented generically which makes sense given the size of the setting universe. The Life Among the Ruins section which follows goes over the basic mechanics of the game: movement, survival, encumbrance, etc. having that come first in the section does send a message about the kind of survival action the game wants to play out. Standard combat gets two pages of rules. That’s a refreshing change of pace from other games. An eight-page section covering Technology follows, which looks at the main technologies of the ruined setting and the complexity of them. Vehicles ride up next- treated in a more descriptive rather than highly detailed approach over eight pages. Given that vehicle building and the like usually turns me off, I appreciated this. The rules provide vehicle combat mechanics, but I suspect gamers who like crunch will want to bolt on some additional systems to this.

The rules move to more background in an eight-page section suggesting optional "factions" for the GM. These are groups with various differing agendas operating in the Cascade Failure universe. We end with a seven page section of lightly described psychic "gifts." The finish is a nicely laid out two-page character sheet.

Overall
I think there are three ways to look at this:

1. If you’re looking for setting material and ideas, this is useful. There’s enough here that you could easily run a campaign with these rules or elsewhere. It isn’t fully fleshed out, but I think that’s a real strength. Christopher doesn’t close anything off. Instead he manages to capture the excitement of the OSR products by providing a cool premise and the tools to play in that. And I say that even though I’m not an OSR guy- I haven’t gone back to play those, but this work does push me to start thinking about that.

2. If you’re looking for a sci-fi ruleset you can pick up and play based on having played other rpgs, then it’s a good choice. It has an interesting spin on sci-fi. It is a minimal system, with enough detail to satisfy, but also requiring the GM to do some figuring out and adjudicating. Again, this is a reading review, but I’d be interested to see how if plays at the table.

3. As an example of how to do game layout and design- it is pretty fabulous. Any amateur game designer ought to consider this an example of what to strive for, on many levels.

I really suggest everyone go and take a look at this game, and his other ones. Christopher's doing amazing work. Amazing.

Portability
The basic concept of the setting is a good one- and actually takes away some of the issues I have with Empire-spanning sci-fi games. I like the idea of such a game being survival and "wilderness" oriented. I think the setting concepts here, light as they are on mechanics could be used elsewhere.
Posted by Lowell Francis at 2:24 PM