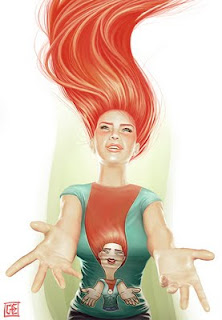 My Changeling the Lost game continues apace- I thought I’d share a couple of things I did recently as a GM which worked pretty well and might be adaptable for others.

Adding in After the Fact
The campaign has been going on for over two years now, but we’ve also changed the line-up of players significantly. When I’d established the structure of the city- two parallel and somewhat competing Courts, I’d left a few things out that would have been nice. I’d established neutral ground for each of the Courts in their own Hollows, and had a shared meeting space in a renovated Church building. That came out of the loss of the previous shared Court Hollow (a plot thread that’s now coming back). But those spaces have a formality to them, and I wanted a more casual watering hole. This was the kind of thing that would have come up earlier in the campaign, and if I mentioned it now it would have felt out of place- mostly to me- I suspect the players would have bit easily.

One of the things I’ve done is not establish the names/identities of every Changeling in the Freehold. I have more than half identified, but I keep a floating pool of others. That way I can bring them up, establish that the players know of them, but don’t know them well. A few sessions ago, one of the players took up the role of the Herald to the Court of Rust. Each Court has a Herald whose job it is to know how to get ahold of Court members and to pass word to them when necessary. That keeps things relatively decentralized and protected. In any case, I established a couple of Changelings the PC hadn’t been able to track down. One of them I named Absinthe Recurse, a ‘conceptual’ Elemental. People couldn’t exactly describe what she was an elemental of- she would just pop up as if she’d always been there. I imagined her as a kind of reality fragment- I suspect echoing some ideas from Grant Morrison’s The Invisibles and Doom Patrol*. Recurse hadn’t been seen in some time. That was the first and last mention of her (the image there is the one I used for her- found on Deviant Art created by Ferlancer).

In any case, I several sessions later, I started the game with them going down to Recurse’s bar/pub as they’d planned to. There was some entertainment, other Changelings were there and the news and rumors of the day got batted around. It was a good scene- and it took the players a couple of minutes to realize that this bar hadn’t always been there, though it felt like it had. This was opening night, but Recurse’s nature stretched the existence of it back- at least in their memories. The recalled holiday parties there, the time Hopscotch Takebacks got sick from eating tainted fries, the band which had played there last week. It ended up well- and now I’ve got a retconned central, neutral ground hangout for the Changelings that builds on their inherent strangeness.

I’ve used a variation on this in the past- where something rewrites reality and I play it off with a straight face for a while. The disconnect between player and character knowledge helps this. It also helps if you have a table with some players who might not be as plugged in to the events of the game. A number of years ago, in a fantasy campaign, I started mentioning an NPC who was with the group. Some people nodded, but a couple of others looked puzzled. One player after a session or two asked where that NPC had come from, and I spun a little story of events that he (the player didn’t remember). Other players let it go, but eventually they did manage to uncover that events had been rewritten and managed to fix things.

New Roles
I had another trick I come off fairly successfully this last session. I suspect other GM’s use, but it had been a while since I had and I was reminded of how well it could work. Leo, a Beast Changeling recently emerged from the Hedge, was asked by his Prince to train a few members of his Court, the Court of Gardens. Leo, more in-tune with his Beastly nature might be able prepare them. The Prince feared that these three had become a little soft, given the relative safety of the Freehold. The shadows of conflict had begun to gather and he wanted his people as ready as possible.

Leo took time over the course of a couple of sessions to meet and interact with them. Many-Lost-Quills tuned out to be a kind of hipster Bird-Beast working at the last remaining record store in town. When she reacted to the offer of training with little enthusiasm, Leo pulled up all of his beastly form and sent her running. Face down in the mud and muck by the dumpster, she agreed she would train. The second, Cinder, an Elemental of Smoke, agreed as he wanted to get along better with the Court. The last, Abyssinian Max, a Cat Beast with a gambling habit, tried to buy Leo off- with very bad results. So we had a nice mix of natures and details.

At the end of a session, I set up that Leo arrived at a local park to meet up with the three. Max and Quills showed up. As they were waiting at the start of a trail, Leo’s phone rang. It was Cinder, apologizing for having sold him out. In the distance, Leo heard the sound of guns being cocked. And that’s where I ended that session.

At the start of the next session, I started out there, with Leo and his two trainees. I gave quick notes and Contract details to the other two players, making them play Quills and Max. They’d already seen Leo interact with these NPCs at the table, so they had a fairly distinct sense of their personality. We jumped into things fast with overwhelming foes, a sniper in the trees, and a desperate chase through the woods. The scene had extra tension for a couple of reasons. First, since these were NPCs being played as PCs, the players expected me to really try to kill them. And I did try- hard- putting holes in them, nearly drowning one- blinding them even as they had a pack of maniac Hobgoblin woodcutters hot on their heels. Leo, on the other hand, found himself caught between his desire to hunt down and kill the ringleaders of the attack and protecting the people he’d been brought to train. Everyone survived and the group killed a couple of recurring bad guys, although one they really hate managed an escape.

It was a good sequence, with a great deal of tension. But the additional benefit came out of all of the players now having a new affection and appreciation for these two formerly background NPCs. They gains sense of their roles and abilities, in part shaped by the players’ choices. Given that Changelings are often by nature reticent to open up- it provided a great opportunity. All of the players had key scenes, and Leo was able to revel in his role. I wouldn’t have done this kind of switch up play early in a campaign, but I think it works with good players and players who have settled into their own character’s personality enough that they could have fun doing something different.

*Remind me to mention how I believe the first Seaguy mini-series is an excellent example of a kind of Changeling durance in the Hedge.
Posted by Lowell Francis at 9:21 AM