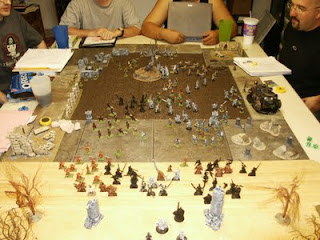 Get Them!
This week I’m crushing some Mooks, Minions, Henchmen, Flunkies, Toadies, Extras and the like underfoot. In this, I’ll be pointing to a geeklist on RPG Geek by inestimable Aramis, bringing together all of the various RPGs which provide a special mechanic for mooks.

Mooks in the Rules

It is interesting to trace the evolution of those mechanics from some simple rules to a kind of key concept in many games. In our group we’ve become so adjusted that one of the first questions in a fight is which are mooks and which are named bad guys. It isn’t that the players ignore the mooks, but that some build their characters to be able to clear house on them and plan accordingly.

So in accordance with prophecy, I bring you five thoughts inspired by the idea of Mooks. Just as Mooks serve as abridged adversaries, I will attempt to be brief...

Every few sessions a GM ought to look back and consider how the game is actually played at the table. What gets left out? What gets avoided? What gets changed significantly? Certainly with our own homebrew, I’ve tried to assess those elements. I have to ask myself several questions when I hit dropped parts: who is forgetting them? what, if anything, has moved in to take the place of those rules? would the game play be improved significantly if I moved to bring those back up front?

I suspect Mook rules, as formally written, probably arose out of that kind of reflection. A GM finally said "You know what, I keep hand waving these little things aside, we could figure out a better and more consistent way to handle them." If you’re playing from rules you wrote, then that ought to be a sign for changes. If you’re playing from existing rules, you can talk about that with the group. You may be able to clear that from your mental inventory and not worry about it. On the other hand, you might find that someone’s built their character on that ignored element- so perhaps it ought to be brought back or the play could be given a chance to respec.

I played in from the White Box 1970’s version of D&D. We didn’t have mooks, but I remember skeletons and kobolds serving that role in early D&D. Mostly in the games which only loosely adhered to the rules- we we’re kids after all. I do recall that giant rats, though, could never be considered nuisance creatures. Those things were dynamite. I think that’s why you start out fighting them in various MMORPGs- a measure of revenge against how nasty they could be at the tabletop. Legendarily I recall hearing that killing a Kobold was seven-years bad luck, but we suspected that was Koboldish propaganda.

If you’ve played a lot of games with mooks (or some synonym) then moving to a game without the them can be quite a shift. GMs can play off of that to provide a narrative contrast. Consider games which want to have a dangerous and risky feel to them. Anyone with a gun ought to be a significant threat. Everyone can take a few shots or else everyone can be killed with a single blow. Rolemaster had a little of that but tied up In crazy randomness and over the top weird. I remember the first time I played the video game Bushido Blade. I’d never been great at fighting games, but I liked them. I could hold my own for at least a little while. Then I played that and "snick"...cut down like bamboo. Again another tangent, but related. In Alfred Hitchcock’s Torn Curtain, Paul Newman’s character struggles with an enemy agent. At this scene goes on and on- it takes forever for Newman to kill and it is brutal. Not gory, but just awful and visceral. Just as that’s Torn Curtain offers a contrast with Hitchcock’s other films with easy, "clean' deaths (like the scissors from Dial M for Murder), games without Mooks can contrast those with them.

4. One reversal of the Mook process is to have the players as the Mooks. Hence the premise of my own rpg, Witless Minion! (available for download here). There’s a certain goofy pleasure to have the PCs playing the background characters, the Redshirts or Stormtroopers of a setting. Of course, the PCs know what’s coming so they’d be in full survival and protection mode. The question is how to make the PCs actually have some powers. Witless Minion and Mouse Guard both do it with the idea having to take alternate routes to reduce the powers, efficacy and abilities of really significant opponents. Badgers can really kill mice, so they have to be smarter than the badgers, have to use other resources available. GMs could also borrow a page from White Wolf’s Orpheus and Hunter: The Vigil. In the former, the PCs have moderate mystical abilities, none of which is particularly potent. However, they can combine those abilities with fellow PCs with different powers. This creates really powerful effects. I like the idea of the underdogs having to overcome through teamwork. Likewise, Hunter IIRC has team "powers" which can be bought and trained.

The other thing to consider about this reversal. Technically any Call of Cthulhu game is like this. When it comes to the Old Ones, or even the Not So Old Ones, any PC looks like a Mook. 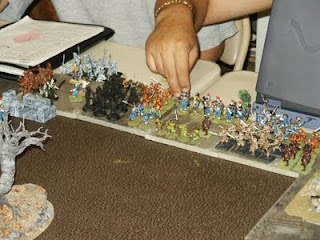 I recall when I first explicitly said I was going to use a version of Mook rules in our GURPS campaign. Basically, players would always do double damage to a mook. That changed the play at the table and allowed me to throw many adversaries at the group. But most importantly, players ended up with a feeling of satisfaction. They were able to clear out several opponents in the course of a fight. If one took longer, that one felt more significant. I think, honestly, that’s the best reason to use and apply these kinds of rules- to give everyone at the table in a combat a chance to show off, to clear swathes, to be able to pull a dead model off the table.
Posted by Lowell Francis at 2:29 PM