From Mice to Microscope: Topics Diverse 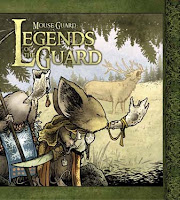 I didn't win, but I like to think I helped them win (a little). Mouse Guard: Legends of the Guard won the Eisner for Best Anthology. Gene and I have a story in Issue #2, so that's pretty cool. David Petersen was super nice to me at C2E2- I mean really nice in that way that genuinely reaffirms my faith in humanity. Mouse Guard's some of the most creative and complete world building I've seen in recent years, so it deserves the honors it gets.

Issue #2 of Flashpoint: Project Superman comes out this Wednesday. I wrote it. So hey, buy a copy if you like comics. 'm pleased with how the whole arc of this story has fallen into place. We went through a number of versions before we got the details on the plot details we had to hit. Writing and working on this has been a learning experience- seeing how the editorial process works. Though it is a kind of Elseworlds story, it fits into a larger plot arc, which means that you have to stick with certain things. It is a little like running a game in a really well-known rpg setting (like Dragonlance or Star Wars). You're playing with some structural constraints. Anyway, if nothing else you should buy it because Gene has been drawing his heart out on it- pushing himself to the limit. He's an amazing artist.

Had two good games this weekend- making up for a couple of really awful games I ran/half-ran the week before. On Friday in LV, we did the follow up to the big battle blow out the previous session. I tried to keep my eye on the Up and Down beats for the session. Generally I worked to keep the beats moving up so that I could end with a fairly heavy Down cliffhanger- and not have it feel like a session where everything went bad. That cliffhangers even more potent since two of the players will be out in two weeks for GenCon- so we'll skip a session.

The other game was the Last Fleet campaign (which I've been posting session reports for). In this case, we had a series of pretty dark Down beats throughout the session. Things look more and more dire for the fleet. That's part of the BSG homage- and kind of general dramatic question “Can they make it through the Void (the Desert, the Darkness, etc)?” So we had those Down beats, but then we had a switch to an investigation and the discovery of a potential solution to some of the fleet's problems. However that's going to involve some combat and action and we left off with the Up beat of hope being discovered, but the Down beat of the Bad Guys Closing In.

I posted about the Heartbreak & Heroines Kickstarter project last week. I thought that kind of project/material could be a useful resource for GMs looking for ideas on how to make their games offer more to women. I think any tool that helps GMs understand and better serve any player group, especially those traditionally marginalized by gaming is worthwhile. I don't know the details of it, but apparently there's a situation which has gotten attention and pushed the team to withdraw the project. There was an anonymous posting on my blog about it (which I removed) and I assume someone has been posting anonymously about that elsewhere. I can't make a judgment about that. I loved the idea of a game which had built inot its premise the concept of a transformational arc. I hope we get more products like these, bottom line.

Saturday we're going to try another Session of Microscope as the set up for a short run campaign. Here's what I told them:

You as a group will be defining the history and world and then I'll run it. Here are the ground rules:

1. I reserve the right to shift magic to make it easier to come up with rules for.

2. It will be a fantasy world- but that can mean anything (science fantasy, post-apocalypse, anime, etc)

3. If it is too close to something in one of the other fantasy games I'm running, I may request you change something (like skyships, since another one of the campaigns is based on that).

You will be building one year's worth of history. Events within that year can and should refer to older things as well. But the history of the setting begins with this Period:

First Period: News of the death of THE EMPRESS arrives. THE EMPIRE splinters and divides. Beginning of THE YEAR OF MISRULE.

Last Period: End of THE YEAR OF MISRULE. THE HUNT begins.

See those things in all caps...I have no idea what they mean. I know that there's an empire, but how big it is, what it encompasses, how it is run, what the racial make up is-- I don't know. You'll define that.

One of my goals it to see how well Microscope functions with a constraint to the span of time. We have a pretty even split between people who have tried it before and those who haven't.

I'll be posting lightly this week (still trying to hit three posts a week) as I have a project set I've been dancing with that I really have to get done by Friday.

Posted by Lowell Francis at 1:00 PM